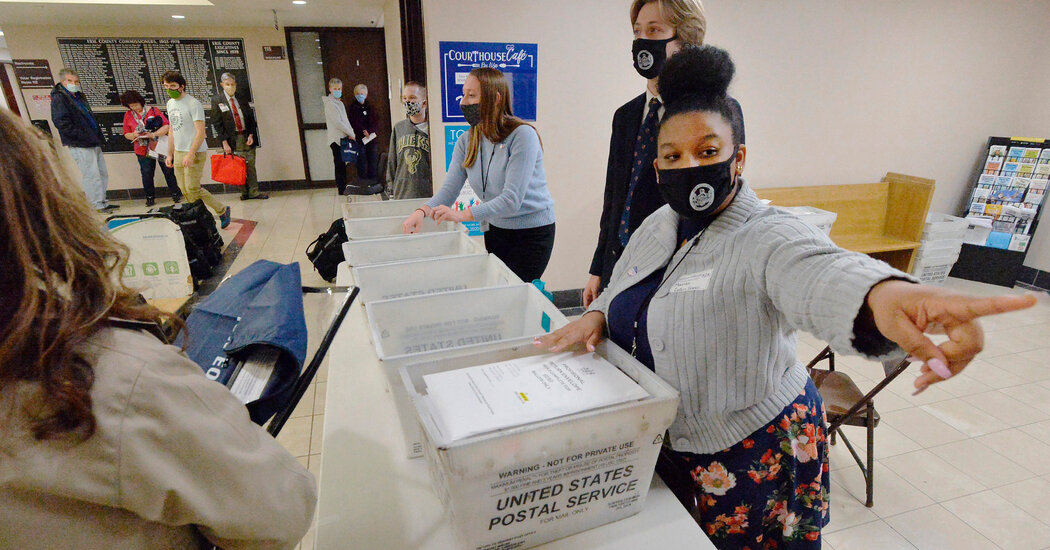 The Postal Service’s inspector general informed Congress on Tuesday that a worker who had made unfounded allegations of ballot corruption inside a facility in Erie, Pa., had disavowed his claims, which Republicans had amplified to suggest there was widespread fraud in Pennsylvania’s voting.

Richard Hopkins, a post office employee in Erie, “completely” recanted allegations that a supervisor was “tampering with mail-in ballots” after investigators questioned him, the inspector general’s office said, according to the Democratic leadership of the House Oversight and Reform Committee.

Not long after the Democrats’ announcement, Project Veritas — a conservative group that researchers say has engaged in a coordinated disinformation campaign to delegitimize the voting process — released a video in which Mr. Hopkins said that he had not actually recanted his statements.

Mr. Hopkins had claimed in a sworn affidavit given to President Trump’s campaign that he overheard what he believed to be a discussion about the backdating of postmarks on ballots that arrived at the postal facility after Election Day.

Ballots must have been postmarked by Election Day, Nov. 3, to count. The implication of Mr. Hopkins’s claim was that postal workers had backdated ballots that should have been disqualified.

Under Pennsylvania procedures put in place during the coronavirus pandemic, mail-in ballots that arrived at election offices after Election Day have been separated from those that arrived by Nov. 3. They have not been added to the vote tallies for any candidate, and President-elect Joseph R. Biden Jr. has won Pennsylvania without them.

Only about 130 mail-in ballots arrived after Election Day out of about 135,000 ballots cast in Erie County, according to Carl Anderson III, the chairman of the county’s board of elections. The post office’s processes “will stand as legitimate under scrutiny,” he said in a statement.

Republicans, eager to find evidence of wrongdoing to bolster Mr. Trump’s fiction that the election was stolen from him, circulated Mr. Hopkins’s affidavit and amplified it.

Senator Lindsey Graham of South Carolina, the chairman of the Judiciary Committee, who has urged Mr. Trump to continue to fight the results of the election, sent Mr. Hopkins’s affidavit to reporters along with a statement that read in part: “I will not allow credible allegations of voting irregularities or misconduct to be swept under the rug.” He later acknowledged in a television interview on Sunday that the claims he circulated were unverified.

Mr. Hopkins could not be reached for comment over the weekend.

The inspector general’s office told Congress that Mr. Hopkins had recanted his allegations on Monday but “did not explain why he signed a false affidavit,” according to the oversight committee’s staff.