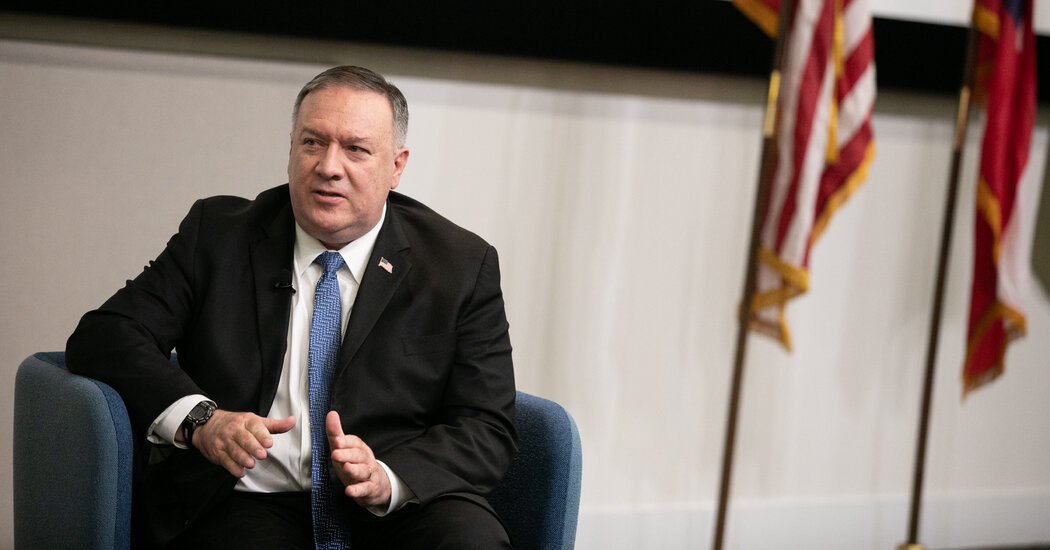 WASHINGTON — The State Department designated Cuba a state sponsor of terrorism on Monday in a last-minute foreign policy stroke that will complicate the incoming Biden administration’s plans to restore friendlier relations with Havana.

In a statement, Secretary of State Mike Pompeo cited Cuba’s hosting of 10 Colombian rebel leaders, along with a handful of American fugitives wanted for crimes committed in the 1970s, and Cuba’s support for the authoritarian leader of Venezuela, Nicolás Maduro.

Mr. Pompeo said the action sent the message that “the Castro regime must end its support for international terrorism and subversion of U.S. justice.”

The New York Times reported last month Mr. Pompeo was weighing the move and had a plan to do so on his desk.

The action, announced with just days remaining in the Trump administration, reverses a step taken in 2015 after President Barack Obama restored diplomatic relations with Cuba, calling its decades of political and economic isolation a relic of the Cold War.

Once in office, President Trump acted swiftly to undermine Mr. Obama’s policy of openness, to the delight of Cuban-American and other Latino voters in Florida who welcomed his aggressive stance toward both Havana and its socialist, anti-American ally, Mr. Maduro.

Other Republicans cheered on Mr. Trump, saying that Havana had failed to enforce political overhauls and had continued to crack down on dissent, breaking promises it had made to the Obama administration.

United States officials said the plan to restore Cuba to the terrorism sponsor list was developed, in a break from standard process, by the State Department’s Bureau of Western Hemisphere Affairs and not its Counterterrorism Bureau, which would typically play a central role in such a decision.

Monday’s designation said that Cuba has “repeatedly provided support for acts of international terrorism,” according to the State Department’s criteria for adding countries to the list, which includes only three other nations: Iran, North Korea and Syria.

The move automatically triggers United States sanctions against Cuba — likely to have negligible effect, experts said, given the scale of existing American penalties against Havana.

But the action could be a symbolic deterrent for businesses, adding “another among many disincentives to seek opportunities to export to, import from or provide services for Cuba,” said John Kavulich, the president of the U.S.-Cuba Trade and Economic Council.

Mr. Pompeo’s statement cited Cuba’s refusal to extradite 10 leaders of Colombia’s National Liberation Army, also designated a foreign terrorist organization, who have been living in Havana since 2017. The leaders traveled to Havana in 2017 for peace talks hosted by Cuba to end a long-running insurgency in Colombia, and have not returned home.

The National Liberation Army has claimed responsibility for a bombing of a Bogotá police academy in January 2019 that killed 22 people and injured more than 87 others.

Mr. Pompeo also cited the presence in Cuba of three fugitives charged with or convicted of murder in the early 1970s, including Joanne D. Chesimard, 73, a former member of the Black Liberation Army who now goes by the name Assata Shakur, and who remains on the F.B.I.’s list of most wanted terrorists for killing a New Jersey state trooper in 1973.

His statement also said that Cuba’s government “engages in a range of malign behavior across the region,” and that its intelligence and security services were “assisting Nicolás Maduro to maintain his stranglehold over his people while allowing terrorist organizations to operate.” He said that the Cuban government supported Colombian rebels beyond its borders and that its assistance for Mr. Maduro had helped create “a permissive environment for international terrorists to live and thrive within Venezuela.”

On the campaign trail, President-elect Joseph R. Biden Jr. spoke of a return to Mr. Obama’s more open approach to Havana, pledging to “promptly reverse the failed Trump policies that have inflicted harm on the Cuban people and done nothing to advance democracy and human rights.”

While the Biden administration can remove Cuba from the terrorism list, doing so will require a review process that could take months.

Ted A. Henken, an associate professor of sociology at Baruch College in New York, called the designation “a symbolic final gesture” by the Trump administration toward Cuba, as well as a reward for the Cuban exile community and like-minded Latino voters who turned out in surprisingly strong numbers for the president in November.

“It is unjustified based on the merits or evidence,” he said. “Cuba is a dictatorship that systematically denies fundamental rights to its citizens, but it has not been shown to engage in terrorist activities.”

“The designation is politically motivated for a domestic audience in the U.S.,” he added.

William LeoGrande, a professor of government at American University in Washington, noted that Mr. Trump’s numerous sanctions against Cuba meant that the new designation would have little additional effect.

Over the past two years, Cuba has been subjected to the most intense United States sanctions of the last 50 years, which have contributed to rationing and profound shortages of basic necessities like medicine and food. Its economy shrank 11 percent last year, according to Alejandro Gil, Cuba’s economy minister.

Mr. LeoGrande said the Cuban government would seek to avoid escalating the conflict, anticipating that Mr. Biden would try to improve relations.

On the streets of Havana, the news was met with anger. “This is a lie,” said Sergio Herrera, 45, a bicycle-taxi driver.

“Trump has his neck in a noose” politically, and “is looking for excuses,” he said.