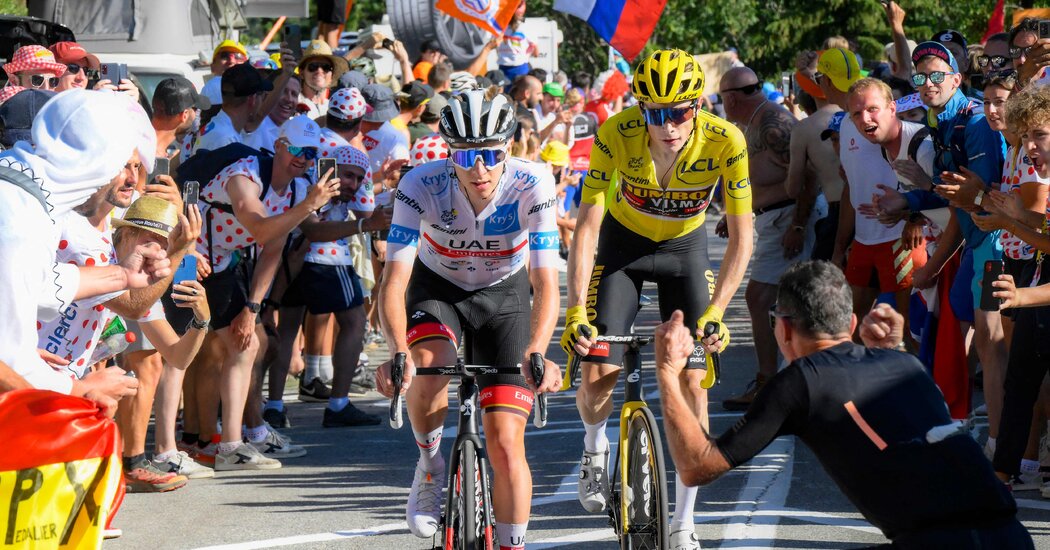 Tadej Pogacar held his fire on the Galibier. He waited through the Croix de Fer. He sat tight during the 60-mile-an-hour descents after those brutal climbs. For more than four and a half hours, he did not make a move.

Instead, Pocagar, the two-time defending champion at the Tour de France, saved his bid to reclaim the yellow jersey for the end of Thursday’s 12th stage: the 21 hairpin turns of the most revered climb in cycling, to the top of Alpe d’Huez.

His only problem was that the race leader, Jonas Vingegaard, and his Jumbo-Visma team had other ideas.

First, Jumbo-Visma’s Wout van Aert, wearing the green jersey of the race’s top sprinter, led the main pack at a blistering pace, making any potential attack difficult for Pogacar. Then, he peeled off, exhausted, and his teammate Primoz Roglic took over. Then, it was the American Sepp Kuss’s turn. Outnumbered and outmanned, Pogacar couldn’t act.

And when he finally attacked, through the corridor of noise that leads the field to the mountaintop finish, Vingegaard, who had been protected all day by his teammates, matched his move. A second attack, just before the finish, ended quickly the same way.

In a final sprint over the last 100 meters, Pogacar managed to finish ahead of Vingegaard, but he gained no time. With the Alps portion of this year’s race complete, Vingegaard had held onto his overall lead over Pogacar, a gap of 2 minutes 22 seconds.

Alpe d’Huez is not the hardest or the longest of climbs in cycling. But its picturesque switchbacks and enthusiastic-bordering-on-manic crowds pressing close to the riders have made it the most famous. When the 2022 schedule was announced and showed that the mountain would return for the first time since 2018, and on Bastille Day no less, cycling fans immediately circled it on their calendars.

Up eight and a half steep miles, the riders were surrounded by fans who had camped out for key positions for days. Wrapped in flags and dressed in cycling jerseys or even in costume, they screamed inches from the riders, creating a wall of noise and humanity unmatched in the sport.

At one point, a man in his underwear on the scorching hot day ran alongside the top riders for 100 yards, carrying a lit flare.

A little ways ahead of Pogacar and Vingegaard on Thursday, Tom Pidcock of Britain, only 22 years old and riding in his first Tour, became the youngest man ever to win atop Alpe d’Huez. His victory came after a long breakaway that was started by the American Neilson Powless, who finished fourth on the day. But the battle that mattered for the overall Tour title was the Pogacar-Vingegaard duel taking place about three minutes behind.

In all, the riders covered 103 miles in just under five hours, an awful lot of it straight uphill. But it was the final climb that offered drama but no decisive moment. And so with the Pyrenees still to come, Vingegaard and his team took one more giant step toward victory.