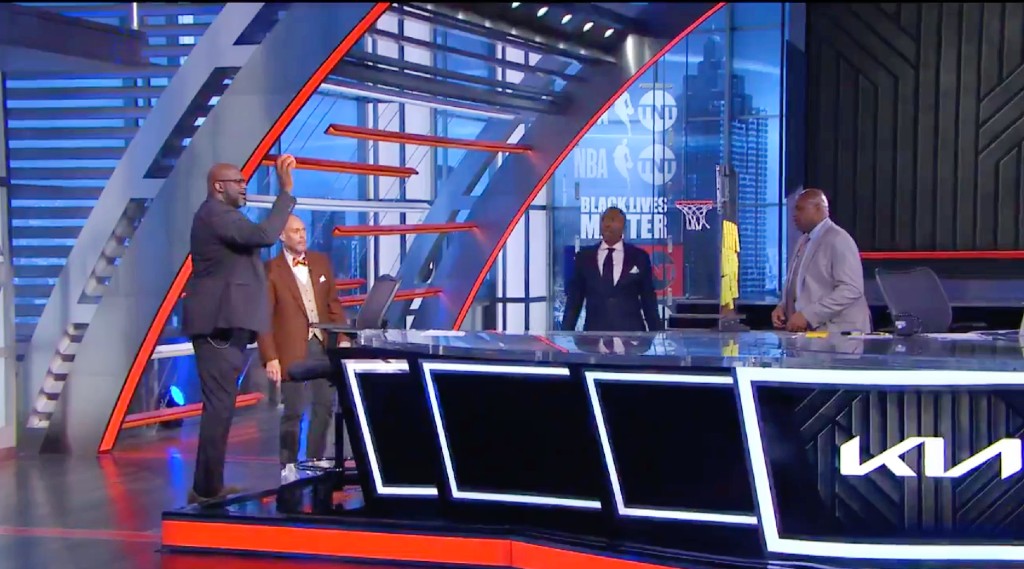 With only one game on Wednesday night, there was ample time for the Inside the NBA crew to get into some shenanigans, which included a full on circus act before Game 2 of Nuggets-Suns in which they brought out a live python to terrify poor Charles Barkley.

After the Suns waxed the Nuggets to take a 2-0 series lead and they discussed the upcoming Thursday night action, they continued their “On This Day” journey for the Inside crew, this time looking back at Game 2 of the 2000 NBA Finals when the Pacers sent Shaq to the free throw line a ridiculous 39 times. Unfortunately, Shaq didn’t have a ridiculous story about his son telling him to hit his free throws or something for Kenny and Ernie to call BS on, but they were prepared to give the big fella a chance at redemption.

Shaq went 18-for-39 in that game, leading Chuck to question how he even got into the Hall of Fame as they watched a lowlight reel of bricks, so Ernie brought out a mini-hoop to set up on the plexiglass divider on the desk to let Shaq show off his shooting touch. Unsurprisingly, this did not go well, with Shaq growing increasingly frustrated as Kenny and Chuck laughed at his failed attempts and bet on when he would make one.

That they initially said inside five shots was actually incredibly kind to Shaq, who needed eight shots to make his first, finally banking one home. The best was, because he’s Shaq, he kept saying “I’m messing with y’all” before missing another trying to insist he was in on the joke and not actually missing. At the end, he tried to exact revenge on Barkley by carrying the hoop with him to dunk on Chuck, but sadly missed that as well.

In fairness to Shaq, shooting on a mini-hoop is hard as hell for normal people, much less someone whose hands completely engulf the miniature basketballs. That this was at the very end of the show made me want to know how long they would’ve let him shoot had he not made that eighth one — Chuck keeping a tally of how many people were already dead on the episode of Law & Order they were running over into was some excellent trolling.