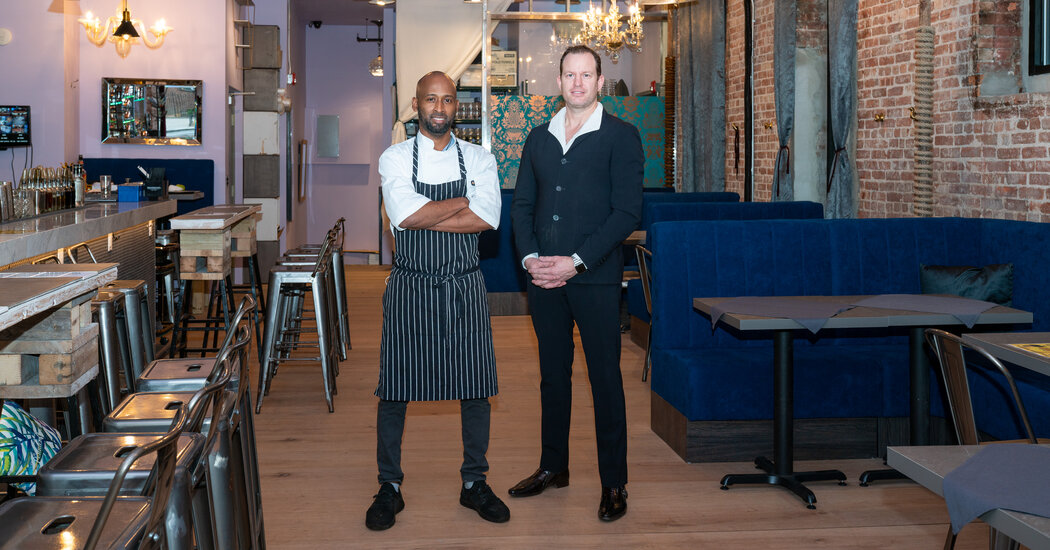 This spacious new Upper West Side restaurant eventually intends to feature the food of Slovenia, with dishes like brodet, a kind of fisherman’s stew, Bohemian squash and mushrooms, and kremsnita, a creamy, custardy cake. For now, while the restaurant waits for gas for cooking, it’s more generally American and European. Though the chef, Kamal Hoyte, a graduate of the Culinary Institute of America, is from St. Vincent and the Grenadines, and has never been to Slovenia, the owner, Dean O’Neill, an experienced restaurateur and restaurant designer, has had business interests there since 2003. The two have been working together on this project for more than a year. Mr. O’Neill has also recruited Alma Rekic, a pastry chef from Slovenia, to consult on the mostly traditional sweets and her baked apple rolls, a Slovene item already on the menu. Mr. Hoyte’s food, described as Slovene-American, also reflects his background working in restaurants like Daniel: His Slovene fish stew will come with aioli, bouillabaisse-style. The restaurant is on two floors, and the lower level will have four private party areas to open in coming months. Street level is where the public dining is, in two rooms, one with exposed brick, a marble bar and assorted chandeliers. The name of the restaurant means bakery in Slovene; the space once housed a bakery.

A steaming hot pot is just the ticket in cold weather. At the new East Village location, the American flagship of this international chain of hot pot restaurants, there is a choice of individual hot pots, not just communal ones for the table. Socially distanced indoor seating in a spacious, handsome room accommodates 45 (of a potential 180), and there will be heated outdoor seating soon. The chain, founded in Shanghai in 2004, already has an outlet in Flushing, Queens. It takes pride in the quality of its ingredients, including American Wagyu and prime beef, Japanese Miyazaki and even vegan Impossible Meat to dip into rich broths bubbling over tabletop cookers.

Randi Lee, the owner of this new neighborhood place, is almost a one-man band, handling everything in opening this restaurant, his first, including design, construction and assembling the wine list. Mr. Lee, a native of Portland, Ore., has been in the business for 25 years, working in Chicago and then at Del Posto, the Spotted Pig and the Smile. His chef is Delfin Jaranilla, who was at Fedora and Quality Eats. The culinary details include ingredients from nearby suppliers for an American farm menu. In-house nose-to-tail butchery, fermentation and sourdough baking feature in dishes like pickled mussels, smoked tilefish rillettes, and pork and beans with pickled rapini relish. In addition to lunch and dinner, Mr. Lee is offering what he calls a “vinyl hour” for drinks and snacks, salads and sandwiches from 1 to 5 p.m. accompanied by recordings. Social distancing offers 22 seats indoors, 42 outside. (Opens Thursday)

Michelle Morgan’s inspiration to open an Asian spot serving food that’s gluten-free and often vegan-friendly comes from her mother, a vegetarian from Hong Kong. Ms. Morgan grew up in Manhattan’s Chinatown eating various Asian cuisines, and that experience is also reflected in her menu. Grilled Japanese eggplant, mushroom pho, lemongrass wings, seared organic tofu and koji-marinated salmon are some of the choices, strictly for takeout and delivery.