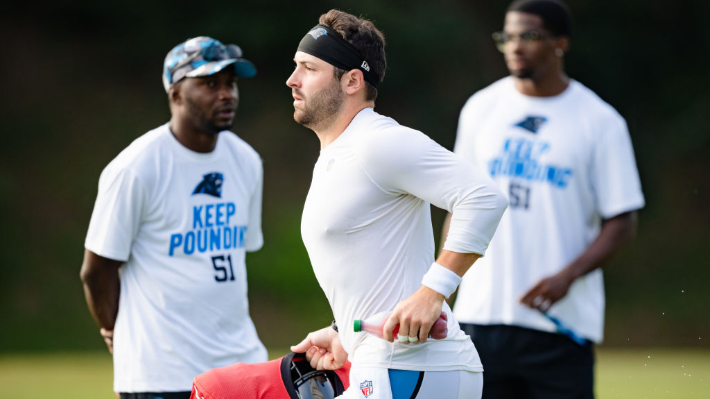 The Carolina Panthers are looking to push for a postseason berth this year after going 5-12 last season. One way they’re trying to do this is to add Baker Mayfield to their roster — while it is unclear if Mayfield or incumbent starter Sam Darnold will be QB1 for the Panthers this season, the pair should, if all goes well, push one another all the way until the start of the regular season.

Mayfield apparently had a nice moment on Saturday morning during practice, as he found another former Cleveland Brown — wide receiver Rashard Higgins — for a touchdown. But unfortunately for them, Higgins had a little too much fun celebrating, so head coach Matt Rhule made the entire offense run.

Baker Mayfield hit Rashard Higgins on a deep post TD. Offense was geeked. Higgins rolled out the red carpet. But he was flagged for taugnting. Matt Rhule stopped practice, yelled at everyone and made offense run

So, what happened here? Higgins’ signature celebration is to roll out an imaginary red carpet (you can read about it right here), and he did that a little too early for Rhule’s liking. As a result, Rhule explained after practice that this was something he felt the need to address.

“We’re not a team that reaches the ball across the goal line,” Rhule said. “You know, I told the guys, ‘Hey, after you score a touchdown, celebrate, have fun today, this isn’t a true game, but we’re playing like a game.’ But in between the white lines. Great play by Higgy, made a great touchdown catch, but I just wanted to make sure they all understood that we won’t win if we don’t protect the football. Sometimes as a coach, too, you gotta make sure the intensity stays throughout the whole practice.”

Rhule went on to say he wanted the defense to understand that they do not give up explosive plays and the offense to understand that celebrations wait until after the ball gets into the end zone. You have to think the point got across when the collection of adults were made to run by their boss for enjoying something that happened at work a little too much.

Alexis Argüello Jr., Son of a Champion, Is His Own Man