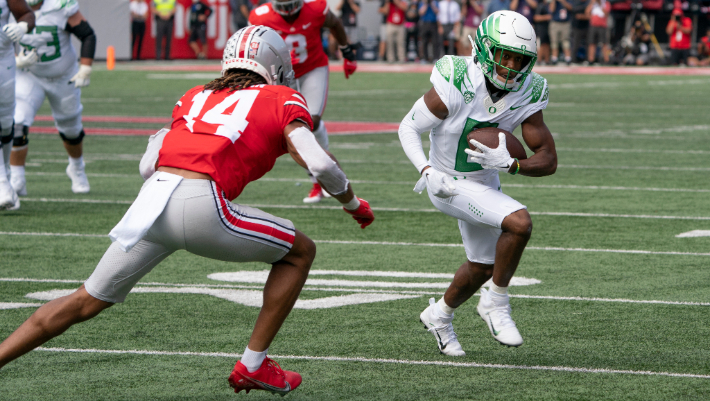 The Oregon Ducks walked into Columbus and pulled up an upset on Saturday afternoon. In one of the more surprising early results of the college football season, the 12th ranked Ducks took down the No. 3 Ohio State Buckeyes, 35-28, in a game that produced a whole lot of yards and plenty of fireworks.

The Ducks made clear early on that they were ready to play despite walking into a hostile environment at Ohio Stadium. Ohio State’s young and inexperienced defense ran into some serious problems against Oregon’s rushing attack, as the Ducks ran the ball 38 times for 269 yards and a trio of scores. The offensive line did what it set out to do, and the duo of CJ Verdell and Travis Dye did the rest.

Ducks signal caller Anthony Brown did what he needed to do through the air, completing 17 of his 35 passing attempts for 236 yards with two scores and, perhaps most importantly, no interceptions. While Oregon wasn’t really going for the big play through the air, Brown completed passes to 11 receivers, with Verdell and Moliki Matavao finding the end zone.

The Buckeyes did have some success on offense, particularly through the air, as CJ Stroud went 35-for-54 with 484 yards, three touchdowns, and a pick. The receiving trio of Jaxson Smith-Njigba (seven receptions, 145 yards, two touchdowns), Chris Olave (12 catches, 126 yards), and Garrett Wilson (eight catches, 117 yards, a score) were able to do a ton of damage against the Ducks defense, while standout freshman running back TreVeyon Henderson punched one in on the ground.

But ultimately, Ohio State kept running into trouble at inopportune times. They only converted six of their 15 third downs and went 2-for-5 when they went for it on fourth, while they committed eight penalties for 71 yards. A young team, the Buckeyes are certainly talented enough to get much better as the year rolls along — as we all know, early losses can be overcome in the eyes of the Playoff committee — but they ran into a team tailor-made to punish them early on in the year, and the Ducks certainly made that happen.

As for Oregon, this is the kind of gigantic road win that can potentially springboard a program that’s been looking to return to the Playoff for years. With how the Pac-12 has long been viewed in the eyes of the selection committee, picking up an early win in Columbus is the exact sort of feather in the Ducks’ hypothetical cap that can help them overcome a potential loss down the road. Whether or not that happens remains to be seen, but this will go down as one of the best wins of the Mario Cristobal era in Eugene.