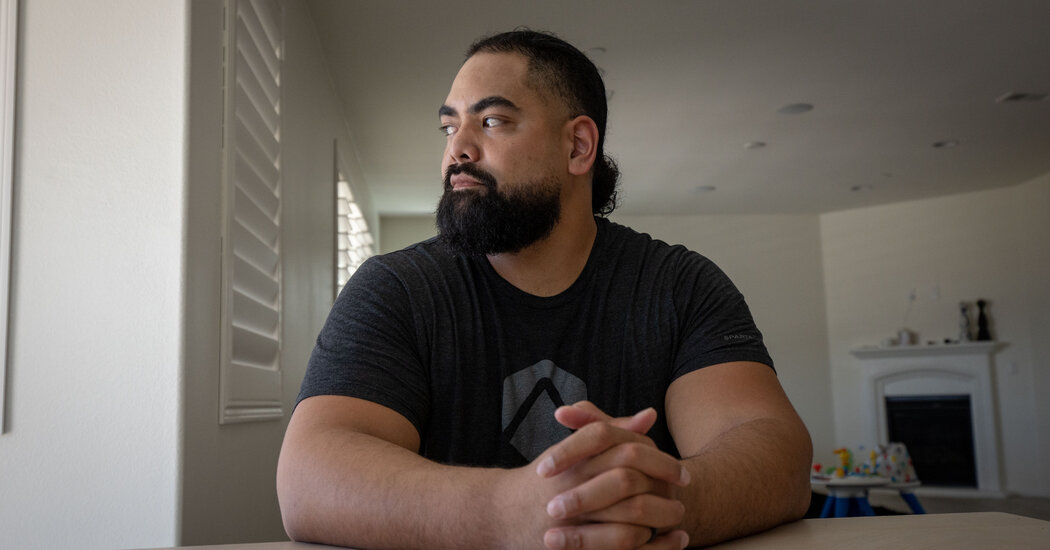 The New York Times Sports department is revisiting the subjects of some compelling articles from the last year or so. Here is our August report on N.F.L. players who opted out of the league during the coronavirus pandemic.

Like so many people during these turbulent times, Leo Koloamatangi finds comfort in his routines. And so every Sunday and Monday — and in this upended N.F.L. season, most Thursdays, plus the odd Tuesday and Wednesday — he has watched other people do what he loves most.

From his Southern California home, Koloamatangi, 26, cheers for his friends around the league, and for his team, the Jets, longing to be on the sideline with the men he calls his brothers. He had a choice. He could have joined them, practiced with them, prepared with them, muddled through 13 losses with them before they got their first win.

But not this season.

Not during a pandemic that had already killed two close relatives when he made his decision, and not when he had a young daughter, Aurora, and when his wife, Athena, was in the early stages of pregnancy. Along with 67 other players, Koloamatangi, an offensive lineman, opted out before the N.F.L. season, sacrificing career development and potential glory for his family’s well-being.

When Koloamatangi spoke with The Times in August, he called that decision the hardest of his life. In early December, he called this year his hardest as a football player. He also said he had no regrets.

“I have this overwhelming sense of accountability, to my family and myself personally,” Koloamatangi said. “I’m very grateful that I can play in the N.F.L. and compete at the highest level, and there’s nothing more that I’d want to do than satisfy my job. But because of what I must protect and who I have to look over and look after, my position was to sit out and watch the season play out.”

Amid growing restrictions in California, he has hunkered down. Koloamatangi wishes he could have had a large Polynesian party for Aurora’s first birthday last month, and he wonders what might have happened if he had not opted out.

Over three seasons, he had pinballed between the active rosters of the Detroit Lions and the Jets, never appearing in a regular-season game. He might have gotten his chance this season, as practice squads expanded to 16 players from 12 to account for Covid-related roster shortfalls.

That is how Kendall Hinton, a practice-squad wide receiver for the Denver Broncos, got his first official N.F.L. snaps, stepping in to play quarterback in a game against the Saints after all four of the regular QBs were exposed to the coronavirus.

“There are lot of guys out there who have opportunities in front of them because of Covid,” Koloamatangi said. “Times like this, it’s great for players like that. And quite honestly, players like me.”

As transmission rates surge across the country, the number of positive cases in the N.F.L. has also swelled, but the season has continued, often in uncomfortable ways. Outbreaks rampaged through the Tennessee Titans and Baltimore Ravens, sickening not only players and staff members but also family members. And although most players who were infected have returned, at least two have endured serious complications — Buffalo tight end Tommy Sweeney, who has the heart condition myocarditis, and Jacksonville running back Ryquell Armstead, who was reportedly hospitalized twice.

League officials have maintained that no evidence exists of players transmitting the virus on the field. But when Koloamatangi opted out, he fully expected to contract the virus, in part because his position requires nearly constant close contact in games and at practices.

“If somebody told me, ‘Covid’s going to have a huge impact on our schedule and our practicing and how we meet, but you and your family wouldn’t contract the virus,’ I think I would have went,” Koloamatangi said. “But because no one really had an answer, we didn’t know what to anticipate. There was no way for me to guarantee personal protection over my family.”

As per an agreement between the league and its players’ union, Koloamatangi received a $150,000 advance on next year’s salary — not a small sum of money, but a fraction of the $750,000 he would have made.

His family does not have an extravagant lifestyle — “we really only splurge on our kids,” he said — and has been able to manage the financial burden well enough.

He and Athena give each other time to themselves every day, and Koloamatangi often spends his in their garage. There, he recently installed a deluxe gym, replete with weight machines, a full power rack and a force plate, and he is confident that, after the longest off-season of his career, he will return a superior athlete. That soothes him.

He is not naïve enough to think that his presence on the Jets would have prevented them from hurtling toward one of the worst seasons in franchise history. But, he said, he feels as responsible for their swoon as anyone on the roster.

So every week, when Koloamatangi watches the Jets play, he thinks about them and their families. He thinks about the pain they must be experiencing this season, and he thinks about how next season he hopes to see them again. Afterward, he sits with Athena and tells her how grateful he is for all their time together.

“I’m just looking at her like, ‘I wish I could be there, I need to be there,’” Koloamatangi said. “It’s something that I’m definitely excited to rekindle once I get back. But it’s hard, you know?”