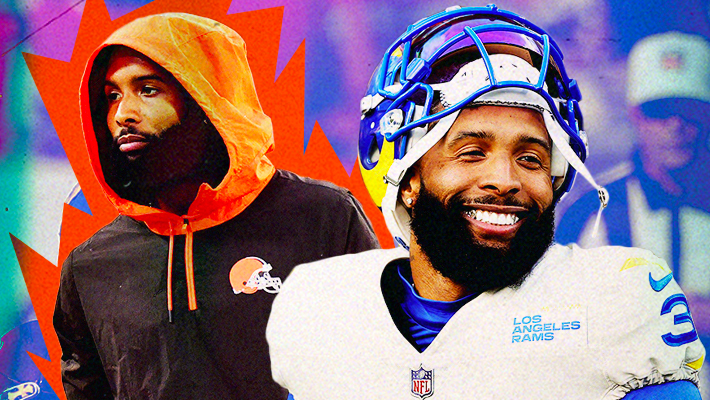 Odell Beckham Jr. made his return to the field on Sept. 26, 2021 in Cincinnati, 11 months after suffering a torn ACL. He registered five catches for 77 yards and got one rushing attempt for 10 yards, a promising return that figured to help open up the Cleveland Browns’ offensive playbook.

Those 87 combined yards proved to be the high mark for Beckham with the Browns in 2021, as frustrations mounted over the next five weeks, peaking in a 15-10 loss to the Steelers in which the star receiver had one catch for six yards. Two days after that loss, Odell Beckham Sr. made headlines when he posted a video — not one that he made, but a fan had weeks prior — showing Browns quarterback Baker Mayfield regularly missing his son running open. Beckham was excused from practice the next two days, and that Friday, word emerged that he was being released, although that wouldn’t become official until early the next week.

At that point, Beckham had 17 catches on 34 targets for 232 yards and no touchdowns with 14 rushing yards on two carries in six games for the Browns. The former Pro Bowl selection desperately was in need of a new home where he could hopefully reclaim his status as a productive NFL receiver, much less one of its best. With the receiver position as flooded with talent as it ever has been, Beckham needed to find a team that needed a receiver and ran an offense that would allow him to do what he does best: stretch the field vertically and be a red zone threat.

After debating between joining the Packers and the Rams, Beckham ended up in Los Angeles, which suddenly found themselves with a need at receiver when Robert Woods suffered a torn ACL that same week. In eight games with the Rams during the regular season, Beckham steadily built up a rapport with Matthew Stafford that, while not always consistent, showed that he still had some juice and could be a nice complement to Cooper Kupp. Beckham had 27 catches on 48 targets for 305 yards in the regular season, but was finally back to being used as a regular red zone target with five touchdowns. Across 29 games in three seasons with Cleveland, he found the end zone seven times.

Thus far in the postseason, Beckham has been the clear No. 2 target for Stafford, who still looks to Kupp first but has clearly become comfortable with his midseason addition. In the three playoff games so far, Beckham has 19 catches for 236 yards and a touchdown and had his biggest day in the Rams’ comeback against the Niners, with nine catches for 113 yards. It was something we hadn’t seen in a minute: Odell Beckham Jr., playing football with the ease and explosiveness that took the league by storm in New York.

Player fit — in a system, culture, and team hierarchy — is so hard to assess from the outside that it’s often overlooked when discussing an individual’s success or failure, but Beckham’s season is as good an example of its importance as there is. The Rams deserve credit for embracing his best qualities and not asking him to replace Woods by taking on his role and running a bunch of crossers, option routes, and pivots, but instead using him as the vertical threat opposite Kupp, one that stretches defenses, occupies safeties over the top, and works deep comebacks, posts, and drive concepts to take advantage of how DBs have to give him cushion and respect his speed. Beckham deserves credit for being, by all accounts, patient with his role and putting in the work to get up to speed with the offense and build the needed rhythm with Stafford for it all to work.

The result has been a steady integration into the Rams offense that is culminating in a terrific playoff run, and in the time-honored tradition of the NFL, as production increases for a star receiver, the diva talk has faded away.