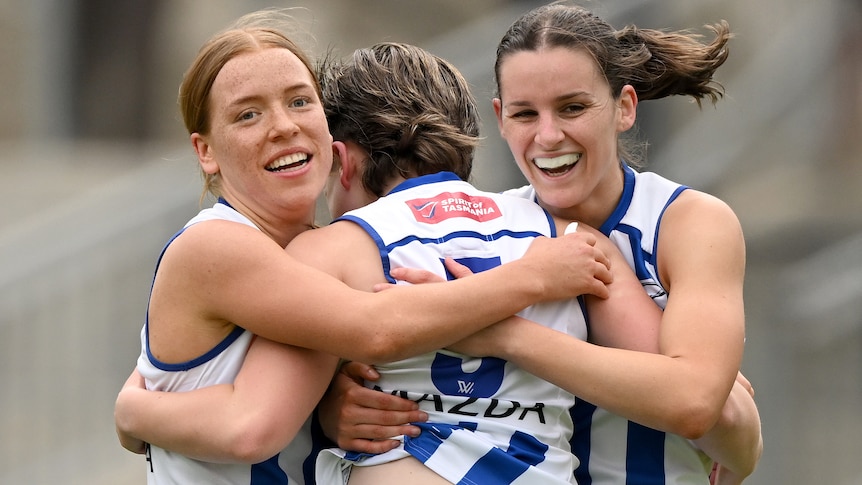 North Melbourne have leaped into the top eight and ended the Western Bulldogs’ unbeaten start to the AFLW season with a 15-point win at a sold-out Punt Road Oval.

She was wonderfully assisted by Jenna Bruton as the Kangaroos had the edge on the Dogs’ vaunted on-ball brigade.

Katie Lynch and Isabella Grant’s intercept marking in defence was a feature for the Bulldogs, while 17-year-old Rylie Wilcox’s two goals kept her side in the match, which was in the balance for the majority of the afternoon.

The Kangaroos combined strength at the contest with ferocious tackling to dictate proceedings early, firing the first strike through half-forward Isabella Eddy, who found goal smartly in the opening 90 seconds

The Dogs weathered the early storm and steadied, taking the lead at quarter-time when Rocky Cranston walked into an open goal.

Hard-running Irishwoman Vikki Wall found goal to start the second term, which for the most part was played on North’s terms.

The Kangaroos owned the corridor and dominated territory, but were unable to add to Wall’s major, thanks chiefly to some sterling Bulldogs defence, piloted by Lynch and Grant.

Captain Ellie Blackburn had a big third term and the Bulldogs peppered the goals early but let North off the hook with three successive misses.

The Roos made the Dogs pay and led by six points at three-quarter-time on Emma King’s powerful mark and goal.

Wilcox’s second goal gave the Bulldogs a sniff in the fourth but North ran the match out stronger.

Collingwood have moved to second spot on the AFLW ladder after withstanding a Maddy Prespakis masterclass to defeat Essendon by 11 points at Olympic Park Oval.

Prespakis (31 disposals, 17 contested possessions, five clearances) was rarely out of the thick of the action on Friday but the Magpies had more contributors over four quarters to prevail 4.4 (28) to 2.5 (17).

Mikala Cann (20 disposals, seven clearances, nine tackles) worked tirelessly on the ball, Ash Brazill set a sizzling early tone and Chloe Molloy electrified with one of the goals of the season.

The Bombers’ ball movement was superior early but they were unable to adequately capitalise on their territorial dominance.

Collingwood opted for an ill-advised dry-weather method in the slippery conditions but they changed that up in the second term, out-tackling Essendon 18-7, after trailing that stat in the opening quarter 19-28, and getting on top at the clearances.

Prespakis was everywhere in the second period and her goal midway through the quarter gave the Bombers the lead.

The Magpies responded through a moment of sheer brilliance from Molloy.

She sharked a throw-in inside Collingwood’s attacking 50, zigzagged her way past two would-be tacklers, sold some delicious candy and finished expertly on the outside of her magical boot.