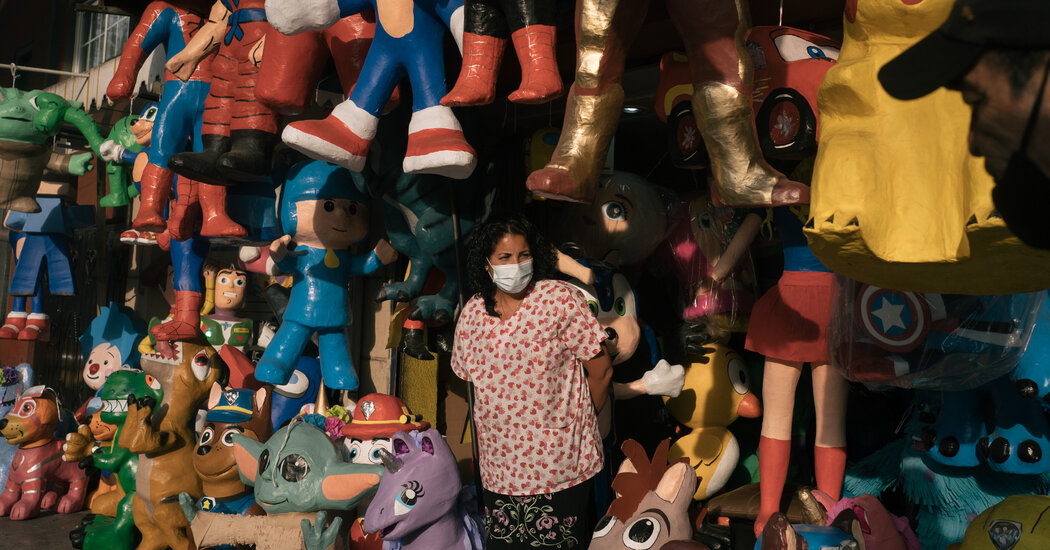 The piñata industry, dependent on social gatherings, has seen sales plummet. Some artisans, in a creative bid to survive, have added coronavirus figures to their lineups of superheros and princesses.

MEXICO CITY — The sight is jarring against the backdrop of smog and concrete that marks this part of Mexico City, a tangle of freeways and overpasses with old buses rumbling by and belching smoke.

But there, bursting like flowers amid the ashen buildings, they hang in row upon row: piñatas, painted every color, from bright fuchsia to midnight blue to Baby Yoda green. On the sidewalk, a Spiderman piñata stands beside Batman, while Mickey Mouse leans against Sonic the Hedgehog.

And included among the copyright-be-damned cartoon characters, superheros and doe-eyed Disney princesses is a more recent addition to the Mexican piñata repertoire. Painted lime-green with a gold crown, spikes erupting in all directions, the coronavirus glares at passers-by.

The pandemic piñata is one of his most popular options, said Ivan Mena Álvarez, who runs one of the oldest stores in the Cuauhtémoc neighborhood known for its piñatas.

Transforming a deadly virus into a comic effigy might strike some as a risky business move, especially in a country with the world’s third-highest Covid-19 death toll. But Mr. Mena said his customers welcomed a chance to pummel a stand-in for an adversary that has wreaked havoc on the economy and devastated whole communities.

Piñata makers, often close-knit families whose business depends on the social gatherings that have largely halted during the pandemic, have, like much of the country, suffered both financially and personally for the past year.

Mr. Mena said that his sales had plummeted, putting him in a dire economic situation, but that the personal losses had been even worse. Eleven members of his extended family have died of Covid-19, as well as more than two dozen others he knows of in the industry.

“It’s so hard for a lot of us,” he said. “It just never crossed your mind that there would be so many dead in so little time.”

Last month, the Mexican government updated its official figures, showing that the virus may have claimed more than 300,000 lives, an astonishing toll for the country of 126 million people.

The effect of the pandemic on the economy has been almost as ruinous. Last year, Mexico suffered its biggest annual economic slump since the Great Depression, and the financial fallout may push millions into poverty.

The piñata trade, a national tradition in Mexico dating back to the 16th century, has been largely idled by the restrictions on birthday parties and other get-togethers, where cracking open the treat-filled figures is a central part of many celebrations.

The pain has been felt across the country.

“You can’t work, there are no more parties, nobody buys from you,” said Dalton Ávalos Ramírez, who runs a piñata store in the city of Reynosa, near the U.S. border. He said he had gone from selling 20 to 30 piñatas a week before the pandemic, ranging from about $15 to $125 each, to just one or two some weeks.

Mr. Mena, in Mexico City, is the fourth-generation piñata maker in a family that he said had been in the business for almost a century. His great-grandparents, he said, were among the first to set up shop in this part of the capital.

“We are the piñata pioneers,” he said proudly.

Mr. Mena made his first piñata when he was just 6. On his work desk is a photo of him at 9, when he made some of his first large-scale piñatas in the shape of a seven-pointed star, a central part of Mexico’s Christmas tradition.

“You develop a love for this craft,” he said. “It’s in your blood.”

Nothing could prepare Mr. Mena for the devastating impact of the pandemic. When much of the country shut down at the end of March last year, sales dropped by 90 percent, he said. Five workers had to leave Mexico City after being furloughed.

To survive, Mr. Mena began improvising. Along with the coronavirus piñata, his shop began selling effigies of Susana Distancia, Mexico’s social-distancing superhero, as well as of Hugo López-Gatell, the country’s coronavirus czar who has been much maligned for vastly underestimating the pandemic’s toll on Mexico.

People “would beat him but because he wasn’t telling the truth,” Mr. Mena said of the López-Gatell piñata.

To boost sales, Mr. Ramírez, the shop owner in Reynosa, also decided to diversify his store’s offerings. He began learning how to bake cakes, while his sister learned how to make arrangements with balloons.

“If we don’t have work in one thing, well, let’s help by making something else,” he said.

But despite the ingenuity of these craftsmen, sales have risen little, and the Mexican government has given businesses next to nothing in terms of stimulus to get by.

Sitting between a Wonder Woman piñata and a portrait of the Virgin Mary, Mr. Mena wiped away tears as he recalled how things got so desperate last summer that his clients and neighbors began adding food parcels to their payments for piñatas to help him, his family and other piñata makers who supply his business get by.

“People already knew us, thank God, good people,” he said. “They helped us.”

The family had hoped sales would pick up around Christmas, usually the busiest season, but in mid-December, the capital entered another lockdown and the store was forced to close. Still, far from being bitter at the authorities, Mr. Mena said he understood the need to “sacrifice our earnings for the good of the people.”

The enforced slowdown brought on by the pandemic has also given him more time to appreciate the craft of creating piñatas. “We’re going to make them with more patience,” he said. “Going back to creating and teaching and feeling that love for what you do.”

In Reynosa, Mr. Ramirez, who recently became a father for the first time, is also experimenting with new types of piñatas, the inspiration for which can often be personal as well as from popular culture.

“I’m a dad, and I have a daughter, so now I have to make piñatas that are more cute,” he said.

While the present situation remains grim, Mr. Mena is feeling more optimistic about the future. With vaccines rolling out, although slowly, he believes his business, and the centuries-old industry he is so proud of, will finally start to recover.

“Like a phoenix from the ashes,” he said, “the piñata trade is starting to pull through.”