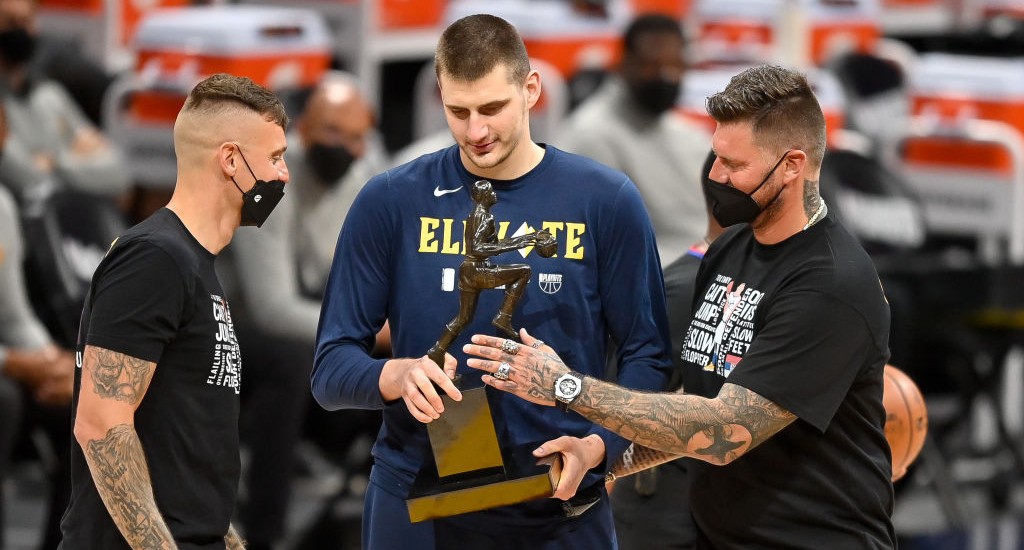 Monday night’s Heat-Nuggets game didn’t look like it was going to be particularly interesting or noteworthy in the fourth quarter, as Denver appeared to be on cruise control, up 17 with just a few minutes to play.

Things changed dramatically when Markieff Morris hit Nikola Jokic with a Flagrant 2 foul at midcourt, which set off the Serbian big man who charged Morris from behind and delivered a vicious shoulder block to his back that sent Morris’ head snapping back and left him on the floor for a considerable amount of time.

There was plenty of jawing after Jokic had been pulled away and taken to the bench, and after the game the Heat were apparently mulling about in the hallway waiting for the Nuggets — albeit, seemingly with no real intention of doing much based on the photo of it all.

Jokic said he “felt bad” after the fact, feeling the initial foul was dirty and he needed to protect himself but that he can’t go about it in that way. The problem is, Jokic has a history of making some pretty dangerous plays out of frustration, with this one being the most egregious. Joining the Heat in being upset about the incident was Markieff’s twin brother, Marcus, of the L.A. Clippers, who tweeted that he was noting how Jokic attacked Markieff from behind.

Waited till bro turned his back smh. NOTED ✍🏾

Now, Markieff isn’t the only one involved in this with a brother, as Jokic has two who are rather famously terrifyingly large and rowdy — their desire to fight the Suns players after Jokic’s last frustration foul ejection in the playoffs

Advertisement
went viral earlier this year. They issued, well, we’ll call it a stern warning to Marcus not to carry through on any threats against Nikola when the Clippers and Nuggets meet in December, noting they will be “waiting for you” — Mike Singer of the Denver Post confirmed with one of the brothers this is indeed an account they created specifically to send this message to Morris.

On the sliding scale of NBA players, the Morris twins are as ready for a fight as anyone, but the Jokic brothers exist on a much different plane here. I wouldn’t expect too much to happen from here, particularly if Markieff is not the worse for wear after that scary hit from behind, which he seems to be doing alright as he issued his first statement on Tuesday morning.

I love to see the hate! No doubt I took a hard foul which I always do but I’ve never hit a man with his back turned! Luckily we built different over here. I can take my licks and keep pushing. Joker 1 smooth 0 lol.

Jokic will almost assuredly be facing a suspension for his actions, which will come down later on Tuesday from the league, and by the time the Heat meet the Nuggets again in Miami in three weeks tempers will have cooled some, even if they certainly won’t have forgotten this.