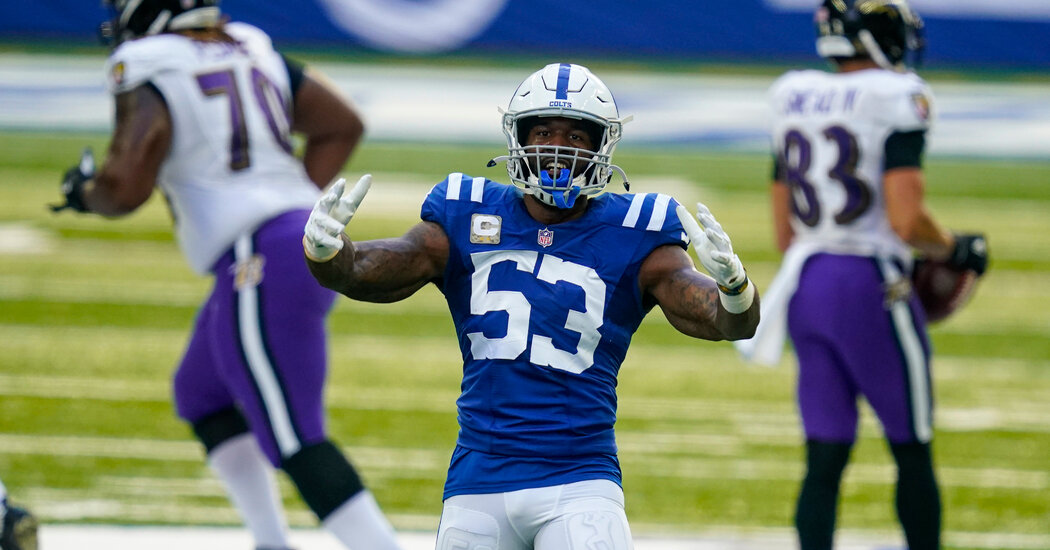 This week will offer a gut check for some of the season’s most exciting teams and players. The Bills will follow their huge win over Seattle with a tough test against the Cardinals. The Dolphins will try to keep their hot streak going against the Chargers, and Joe Burrow of the Bengals will get his first big A.F.C. North test when he faces the undefeated Steelers. Meanwhile, the Rams, lying in wait, will have a chance to steal a share of the N.F.C. West lead in a matchup with the Seahawks.

Here is a look at N.F.L. Week 10, with all picks made against the spread. And while you wait for the action, get lost in the possibilities of the next eight weeks with the relaunch of The Upshot’s playoff simulator.

It’s a little unusual to rave about the defensive performance of a team that gave up 34 points, but the Bills (7-2) were up on Seattle by 27-10 in the third quarter last week before largely easing off on defense and cruising to a 44-34 victory.

Regardless of the points allowed, Buffalo sacked Russell Wilson five times, hit him another 11 times, pulled down two interceptions and recovered two fumbles. Not bad, considering it was facing an M.V.P. candidate who leads the highest scoring offense in the N.F.L.

This week has nearly as difficult a challenge. The Cardinals (5-3) can do considerable damage, thanks to the running and passing of quarterback Kyler Murray, and would get an enormous boost if running back Kenyan Drake could return from an ankle injury.

With Buffalo’s Josh Allen coming off perhaps the best game of his career, it was no surprise for oddsmakers to predict this would be the highest scoring game of the week. But if Buffalo’s defense can perform near the standard it established last week, the Bills can walk away with a road win to be proud of. Pick: Bills +1

What a lovely bye week for the Rams (5-3). They got some rest and watched every other team in the N.F.C. West lose. Now they host the Seahawks (6-2) with a reasonable chance of getting a share of the division lead.

Los Angeles has been more effective running than passing, but Seattle’s secondary is so bad that it makes every offense look terrific — and Jamal Adams, an All-Pro safety acquired by the Seahawks in the off-season to stabilize the team, has been a huge part of the problem. There is every reason to believe the Rams have the advantage in this game, but if Russell Wilson wants to stay in the M.V.P. race, this is the type of game he has to win. Pick: Seahawks +1.5

The Dolphins (5-3) are the team people thought the Chargers (2-6) might be this season. It’s not that Los Angeles has been particularly bad, but it’s hard to be enthusiastic about two wins in eight games. Miami, on the other hand, had low expectations but has been an absolute joy to watch on both sides of the ball, and in its current 4-0 stretch, it has had a combined score of 129-65.

Quarterbacks Justin Herbert and Tua Tagovailoa were in the same draft class, and appear on their way to starring in the league for years to come. For now, Tagovailoa’s team seems far better. Pick: Dolphins -2.5

Despite being on the Covid-19 reserve list because of a close contact, Ben Roethlisberger is in line to play this week, provided he doesn’t test positive himself. Regardless, he won’t be able to practice all week, which would be a bigger deal if the Steelers (8-0) were facing a defense more competent than that of the Bengals (2-5-1).

If Roethlisberger is at all limited, the Steelers can simply run their way to a win with James Conner. And while quarterback Joe Burrow has a bright future for Cincinnati, he is very likely not ready for Pittsburgh. Pick: Steelers -6.5

The Colts (5-3) don’t have a good defense, they have a great defense. By just about every objective measure, Indianapolis is terrific against the run and the pass. Even in a loss to Baltimore last week, they had Lamar Jackson visibly flustered for much of the game and held the Ravens’ vaunted rushing attack to 2.9 yards a carry.

The Titans (6-2), though, are a test for any defense. Running back Derrick Henry can bully his way to yardage regardless of the front he faces, and quarterback Ryan Tannehill is typically an enviable mix of productive and efficient. But Tannehill has had a few quiet weeks in a row, and that can’t continue if Tennessee wants to keep up with the Colts, who should have no problem scoring on the Titans’ suspect defense. Pick: Colts +2

The Buccaneers (6-3) are almost certainly not as bad as they looked against New Orleans on Sunday night, but that loss, coming on the heels of a narrow win over the Giants the previous week, has taken a great deal of the shine off Tom Brady’s first season in Tampa Bay.

The Buccaneers have picked a poor time to be struggling, as the Panthers (3-6) are rounding into shape. While running back Christian McCaffrey is not expected to play on Sunday because of a shoulder injury, the team adjusted in recent weeks to take advantage of the versatility of Curtis Samuel, who excels as a runner and receiver. Pairing Samuel with wide receivers Robby Anderson and D.J. Moore makes the Panthers a team to fear, even for a talented young defense like Tampa Bay’s. Pick: Panthers +5

Both teams are coming off wins, but both wins might not sit all that well. The Ravens (6-2) struggled on offense for much of a victory over Indianapolis, while the Patriots (3-5) needed a furious fourth-quarter comeback to beat the winless Jets. There are degrees of struggle, however, and while Baltimore may have been exposed in recent weeks as being a step or two below Kansas City in the A.F.C.’s pecking order, New England is only a few steps above the worst teams in the N.F.L. Pick:

In their last four games, the Raiders (5-3) beat Kansas City, were blown out by Tampa Bay, throttled Cleveland’s high-powered offense and outgunned the Chargers. Not a perfect stretch, but enough to have Las Vegas in line for a playoff spot if the season ended now. The Broncos (3-5) can’t claim the same, but they are at least making things exciting, with 21 points in the fourth quarter in each of the team’s last two games.

To keep up with the Raiders, the Broncos would need to find a way to even out the team’s productivity. Pick: Raiders -5

Nick Chubb, the star running back of the Browns (5-3), is practicing this week, and if he is able to go, that would be terrible news for the Texans (2-6), who have a comically inept run defense. While Kareem Hunt has talent, and is a great second option to Chubb, Cleveland is far scarier when the offense goes through Chubb.

Cleveland’s running game might become quickly irrelevant, though, if Deshaun Watson and the Texans can get off to a fast start against a mediocre secondary. Watson was able to carve up Jacksonville’s defense last week with long touchdowns to Brandin Cooks and Will Fuller, and a few of those early in the game could take away the Browns’ primary advantage. Pick: Texans +3

It appeared as if running back Raheem Mostert had a chance to come off injured reserve to play in this game, but with the 49ers (4-5) collapsing under the weight of a season lost to injuries, a reasonable question became: Why would he do that? A loss to the Saints (6-2) in New Orleans seems all but certain, so the decision to have Mostert sit out this game, giving him a bonus week off thanks to the team’s Week 11 bye, will have him at full strength for a division game against Los Angeles in Week 12.

Remember last year when there was concern that Coach Matt LaFleur’s offense was relying too heavily on running back Aaron Jones and that quarterback Aaron Rodgers was being minimized? Through eight games, Rodgers is on a pace for 4,506 yards passing, 48 touchdowns and just four interceptions, and the Packers (6-2) are averaging 31.6 points a game. This week, Rodgers is facing the Jaguars (1-7), who have the least efficient pass defense in the N.F.L., according to Football Outsiders.

How much damage can Rodgers do, at home, against a team that inept? As much as he wants. Pick: Packers -12.5

All it took for Alex Smith to get back to starting in the N.F.L. was 17 surgeries on his right leg, the implosion of Dwayne Haskins and a gruesome injury to Kyle Allen (though one far less complicated than Smith’s). It was an improbable path, but the 36-year-old Smith has fought through adversity in his career and won a lot more than he has lost.

So where does that leave the Footballers (2-6)? Certainly no worse off than they were a week ago, when they lost to the lowly Giants, especially when you consider that Washington outscored New York once the switch was made to Smith after Allen’s injury.

The Lions (3-5) are playing at home, and unlike last week when he was on the Covid-19 reserve list, Matthew Stafford will be able to practice. But Smith’s first start in nearly two years might inspire an upset, or something close to one. Pick: Footballers +3.5

Games between N.F.C. East teams should be entertaining because the talent levels are similar. Instead, they are often mistake-filled disappointments in which both teams find new ways to fail. The Eagles (3-4-1) are leading the division, mostly by default, and the Giants (2-7) hardly seem likely to challenge that unless the league finds a way to add several more games against Washington to their schedule. But while the Eagles can and should win, the team rarely covers the spread. Pick: Giants +3.5

In Coach Mike Zimmer’s six seasons at the helm of the Vikings (3-5), the team has struggled to a 6-19 record in road games against opponents with winning records. That’s the situation Minnesota finds itself in this week, though these Bears (5-4) are far different from your typical winning team.

It’s not that Chicago is inept. The Bears are terrific at defending the run and the pass, but the team’s quarterback, Nick Foles, is a wild card who can look brilliant and ineffective — often in the same series. That has led to Chicago struggling so much to score that the quality of the team’s defense is often irrelevant.

So what will it look like when a Minnesota team that can score but can’t defend faces a Chicago one that can defend but can’t score? Probably a bit of a mess. But the Vikings have the best player on the field in running back Dalvin Cook, they have played well in five of their last six games and the Bears make it much too hard to believe in them, even at home. Pick: Vikings -2.5

A quick primer for those who are not familiar with betting lines: Favorites are listed next to a negative number that represents how many points they must win by to cover the spread. Dolphins -2.5, for example, means that Miami must beat Los Angeles by at least 3 points for its backers to win their bet. Gamblers can also bet on the total score, or whether the teams’ combined score in the game is over or under a preselected number of points.

All times are Eastern.