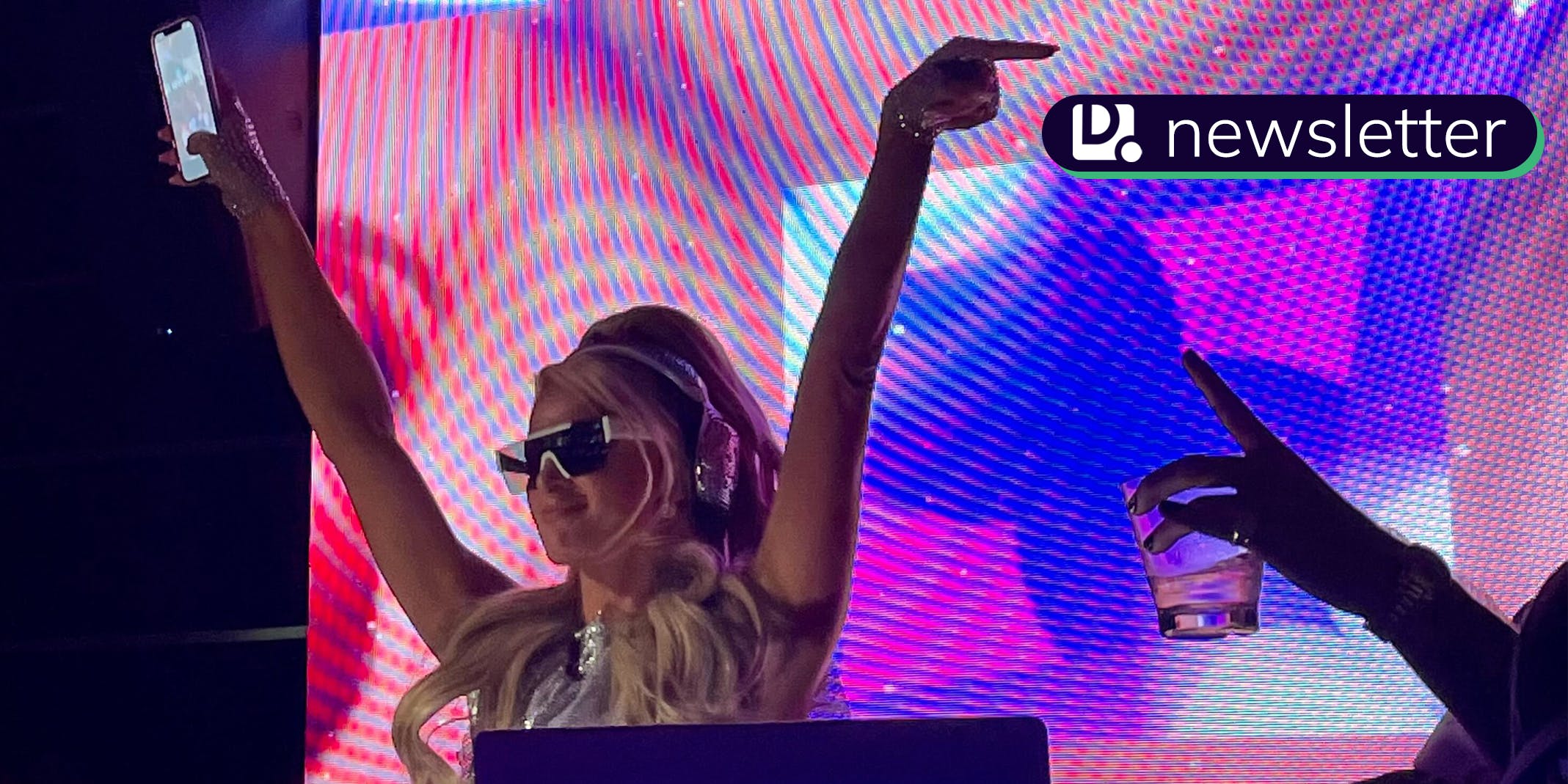 We’re switching it up a bit for today’s SXSW email. Today, our Culture Editor Tiffany Kelly takes you inside Paris Hilton’s DJ set that was a tie-in to NFTs and the metaverse.

As always, our team of reporters will also give you a run down of all the weird, cool, and interesting things they’re seeing at the conference.

Shortly after 11 p.m. on Tuesday, socialite and reality TV star Paris Hilton entered the stage at a cocktail bar in Austin to perform a DJ set, and every part of her was sparkling. Her gloves, headphones, and top were a silver glittery shade, and her long, blonde hair was tied up in a high ponytail. The large crowd pushed to the front to catch a glimpse of her. All phones were out—even Paris’ phone.

A Paris Hilton DJ set isn’t unusual for the music week of South by Southwest (SXSW), which sees hundreds of musicians arrive in town to perform shows and do surprise collaborations. Hilton has been DJing for the past decade.

But what was different about this event was its tie-in to NFTs and the metaverse. The DJ set was hosted by The Sandbox, a virtual, social gaming system that uses cryptocurrency—along with a few other companies. If you’ve been following our SXSW coverage, you know this year’s festival is dominated by talks and events about Web 3.0, NFTs, and the metaverse. So it’s not a huge surprise that celebrities are involved in events centered around these topics, especially since celebrities have been pushing NFTs to us since the beginning of the year.

Hilton’s appearance on Jimmy Fallon’s show in January, in particular, was mocked as the pair talked about their respective NFTs. “The NFT’s part literally looks like both of them are being held hostage,” reads one comment on the YouTube video of the segment, and there are many similar sentiments.

But, beyond Hilton inviting guests to “rage in the metaverse” with her, the DJ set was wonderfully nostalgic and seemingly designed for older millennials who grew up in the ‘90s early 2000s—an era when she became famous—along with some newer hits.

She entered the stage as “Stars Are Blind” played, her single from 2006 that recently appeared in the film Promising Young Woman. From there, she played songs from Oasis, Dr. Dre, The Notorious B.I.G, Dua Lipa, and The Weeknd.

“I’m picking music by the vibe,” she declared.

The vibes were mostly good. Everyone around the DJ stand was dancing and singing along. But there were a few instances in which men pushed and shoved their way to the front, without being aware of the people around them.

The concept of “girls to the front” was lost here, and the crowd was a divide between Hilton fans and techies. However, the set ran a full hour, and most people appeared to enjoy it. As she finished DJing, Hilton talked to the audience and her past life as a party girl. “I used to go out every night of my life,” she said. Hilton also revealed that she’s a “secret introvert.”

“If you’re a brilliant genius, you’re shy,” she said.

With that, she exited the Green Light Social. She had a flight to catch back to L.A.

Not a fan of the Amazon Firestick? You’ve got options.

It’s no surprise why Amazon Firestick is the most popular streaming device—but it’s far from the only great option out there. Wondering which one is best for you? We’ve got you covered. These are the best Amazon Firestick alternatives for every situation.

Our team of reporters are on the ground at SXSW in Austin, TX. Here are some of the notable, interesting, and weird things they are seeing.

🎧 It’s Wednesday, my dudes. At SXSW, it means that the original recipe South-by is coming to life with shift changes and resets. The tech bros are retreating to their work-from-home, converted bedroom rigs. The cool kids with Macklemore haircuts and leather jackets are driving up in Ford Transits. We usually don’t do much music at the Daily Dot (because we cover internet culture), but with this year’s very online crop of TikTok-viral artists, we had to stick around for that second wave. In addition to more great scene reporting, every day, we’ll be updating this sweet Spotify playlist with good songs we heard IRL. Keep it locked. — Ramon Ramirez

🐲 Fire the dragon or hire the dragon? These are apparently the questions we must ask in the metaverse, according to Daymond John and Mark Zuckerberg. In a discussion about digital avatars, the two discussed how people can express themselves in virtual reality. If work moves into the metaverse, John inquires, should people have different avatars for different pockets of virtual life? Would you have a professional avatar dressed in business casual wares or a fantastical dragon that represents you? Riveting questions indeed. — Daysia Tolentino

❓ I spoke with an NFT artist who didn’t seem to know what an NFT is. If a person who creates them doesn’t even know what they are, where’s the hope for the rest of us? — Eilish O’Sullivan

🤠 At Tuesday evening’s Cowboys and Cocktails party, which yes, offered vegetarian BBQ (mushrooms) that a Daily Dot staffer described as “spicy,” Project Indie Hope threw a chill cookout in East Austin at a private residence. But the non-profit does important work: Providing free COVID testing for indie film productions, from UCLA film school projects to several titles that debuted at Sundance, organizers said. A New Braunfels, Texas-based country singer told me he filled-in at the last minute but had to clarify that he wasn’t a DJ. He played a terrific cover of “Neon Moon.” — Ramon Ramirez

🎤 I should have seen it coming. 800 Congress is one of those permanent event spaces downtown perfect for intentionally intimate parties. In past years, the Roots and Flo-Rida have performed muscular, exceptionally crisp sets for 250 nerds. Anyway, Rolling Stone got what it wanted out of its Twitch-partnered activation: A line around the block for T-Pain. — Ramon Ramirez

😎 Paris Hilton DJing for an hour to an intimate crowd at Green Light Social last night was…perfect. At the end of the night, she stood outside the back door, surrounded by fans taking photos. Spontaneously I yelled, “Paris you’re hot!” and though there’s no way she actually laid eyes on me she yelled back “you’re hot!” in my general direction. Life goal: unlocked.  — Mariam Sharia

📚 Meta CEO Mark Zuckerberg spoke at SXSW on Tuesday evening. During his conversation with Shark Tank host and entrepreneur Daymond John, he said the metaverse was the clear “next chapter of the internet.”  You can check out Daysia‘s report on what he had to say here.

🎸 Local punk royals A Giant Dog crowded Valhalla for a late-night showcase that basically served as a rundown of their best songs: “Bendover,” “Photograph,” “Roller Coaster,” “Nutria,” etc. I’d argue 2016’s Pile is their best record but I love the noise of their Arcade Fire covers album they did for a Merge Records anniversary. Singer Sabrina Ellis noted that they played here in 2008 when this place was Room 710. Same vibe though: Grimey as all f*ck. — Ramon Ramirez

The post Newsletter: Paris Hilton’s call to ‘rage in the metaverse’ at SXSW appeared first on The Daily Dot.