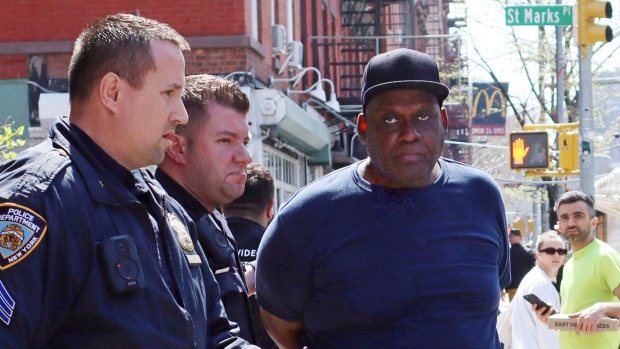 A key, a neon construction jacket, a gun.

The items, left behind in a bloody crime scene at a Brooklyn subway station Tuesday morning, offered investigators some of their first clues as they worked to figure out who had opened fire on dozens of unsuspecting New Yorkers commuting to school and work.

In a matter of hours, those discoveries led to a person of interest. And Wednesday, as more evidence piled up, authorities named the man a suspect, urging the public to contact police if they saw him.

The suspected shooter called in a tip on himself and was arrested about an hour later, two law enforcement sources said.

Frank James, 62, was charged in federal court with violating a law prohibiting terrorist and other violent attacks against a mass transportation system, a U.S. Attorney said. James allegedly fired at least 33 times, hitting 10 people, authorities said. The motive is still unknown, officials have said. CNN reached out to James’ federal defender for comment.

Here’s how authorities pieced together evidence to identify the suspected shooter — and what led up to his arrest.

KEYS, A CARD, A JACKET AND A GUN

A credit card investigators found on the scene offered a key piece of the puzzle they were tasked with solving.

The card had been used to rent a U-Haul van that authorities believed was connected to the shooting, two law enforcement sources said. Internal NYPD emails viewed by CNN Tuesday did not say how authorities believed the van was connected. In the emails, top commanders shared a stock image of a white U-Haul cargo van and asked officers to be on the lookout for a similar vehicle with an Arizona licence plate.

It was about three blocks from the Kings Highway Station, where footage showed the suspect entering the subway Tuesday morning, before the shooting, NYPD Chief of Detectives James Essig said.

“The key to that truck was recovered at the crime scene,” Essig said during a Wednesday news conference. U-Haul records showed James rented the van Monday afternoon, according to a criminal complaint. Surveillance footage showed a person wearing a “yellow hard hat, orange working jacket … carrying a backpack in his right hand and dragging a rolling bag in his left hand,” leaving the vehicle on foot early Tuesday morning at West 7th Street and Kings Highway in Brooklyn, according to the complaint.

No weapons or explosives were found in the van, law enforcement officials said Wednesday. The vehicle had remnants of food in it, and it appeared James may have slept in it, sources said. A licence plate reader detected the van driving over the Verrazzano bridge into Brooklyn, from Staten Island, around 4 a.m. Tuesday, law enforcement officials said.

The gun had scratch marks and prosecutors said they believed that was an attempt to “deface the serial number,” according to court documents. It was purchased by James in Ohio in 2011, Essig said.

By Tuesday night, authorities had pieced together a rough outline of what happened on the subway train earlier that day: After boarding the N train — which begins at the Kings Highway station — the suspect opened two canisters “that dispensed smoke throughout the subway car,” NYPD Commissioner Keechant Sewell said Tuesday night.

He then allegedly shot multiple people as the train pulled into the 36th Street subway station in Sunset Park, Sewell said. Images captured by witnesses show the chaos and panic of those moments: One video shows smoke pouring out of the car where the shooting took place as screams are heard, while in another, people are seen rushing off the subway train.

After allegedly opening fire on the train, the suspect boarded an R train and rode to the 25th Street station stop, Essig said in Wednesday’s news conference.

Less than an hour later, around 9:15 a.m., he was spotted boarding the subway at 7th Avenue and 9th Street station in nearby Park Slope, Essig added.

When the NYPD posted a Twitter message Wednesday morning asking for information on James’ whereabouts, they included a screenshot from one of several YouTube videos the suspect has been linked to.

The videos discussed violence, mass shootings and mental health, often in a rambling fashion, and offer insight into a trip James embarked on prior to the attack.

Many of the videos James uploaded included references to violence, including at a set group of people he believed had maligned him, in addition to broad societal and racial groups he appeared to hate.

In one video posted in February, he criticized a plan by New York Mayor Eric Adams’ administration to address safety and homelessness in the subway system, in part through an expanded presence of mental health personnel, saying the effort was “doomed to fail.” He described his own negative experience with city health workers during a “crisis of mental health back in the ’90s ’80s and ’70s.”

In a video uploaded last month, James talked about having post-traumatic stress and said he left Milwaukee, Wisconsin, on March 20 and embarked on a trip eastward, saying he was heading to the “danger zone.” Preliminary information indicated James mentioned homelessness, New York City and its mayor in online posts, Sewell said Tuesday.

The videos indicate he arrived in Philadelphia around March 25 after several stops.

Federal prosecutors believe James visited a storage facility in Philadelphia that was filled with ammunition and more weapons the evening before the attack, according to court documents. A receipt linked to the facility was found in the jacket recovered at the shooting scene.

Authorities executed a court-authorized warrant to search the facility Tuesday, and found ammunition and a “pistol barrel that allows for a silencer or suppresser to be attached,” among other things, according to the complaint.

Authorities also conducted a search warrant at a Philadelphia apartment they believe James rented for just over two weeks starting around March 28, and found “an empty magazine for a Glock handgun, a taser, a high-capacity rifle magazine and a blue smoke cannister,” the complaint said.

JAMES CALLED IN A TIP ON HIMSELF, SOURCES SAY

James was taken into custody roughly 30 hours after the shooting. He called Crime Stoppers Wednesday and essentially said he saw his face on the news and knew he was wanted, two law enforcement sources told CNN.

He said he was in a McDonald’s on the Lower East Side of Manhattan, the sources said. He told the operator he would be inside the restaurant to charge his phone, a senior law enforcement source said. Moments later, the call dropped.

But another call was made to 911 by a person who believed they had spotted James, one of the two sources told CNN.

Patrol officers arrived at the McDonald’s and were able to locate James down the block shortly after a bystander flagged them to him, a senior law enforcement source said.

Investigators are now reviewing camera footage to try and build a timeline of where the suspected shooter was between the last time he was spotted in Park Slope Tuesday and the time he was arrested Wednesday, the senior law enforcement source told CNN.

The investigation is ongoing, officials have said.