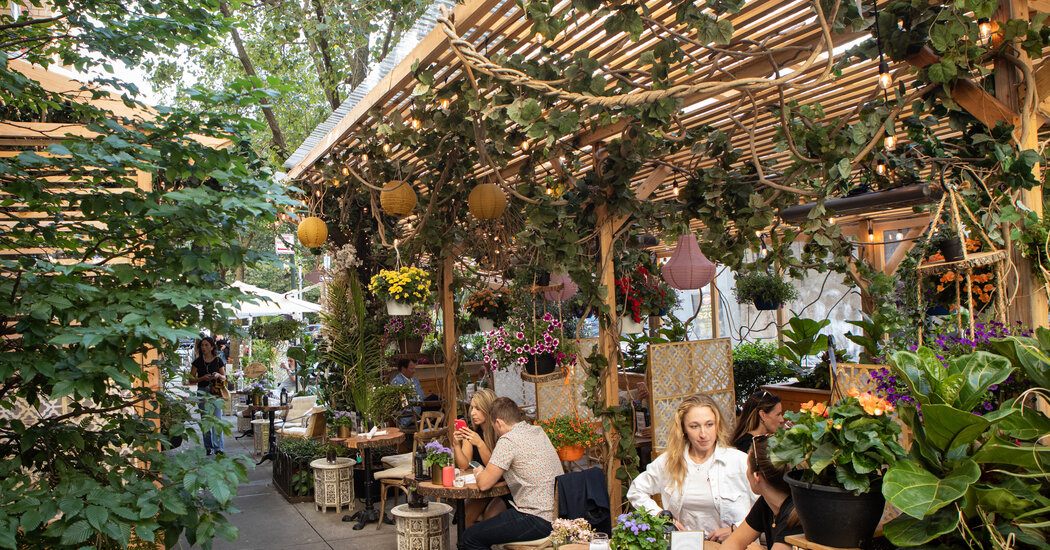 Last September, a pair of cabins the color of spaghetti sauce went up in the West Village roadbed outside the Italian American restaurant Don Angie. Along the base of each was a stripe of the same checkerboard linoleum used on the dining room floor. Each had three walls perforated by large windows whose rounded corners echoed the ones in the restaurant’s facade. Through the windows could be seen private dining booths separated by transparent floor-to-ceiling partitions.

By that time, the Open Restaurants program that gave thousands of restaurants quick clearance to set up tables on streets and sidewalks was several months old. New Yorkers were used to seeing a first wave of in-street dining areas made of traffic cones, sawhorses, planter boxes and other hardware-store items. Don Angie’s cabins were different. They were forerunners of the second wave — designed with forethought, built to last beyond the warm weather and, most interesting of all, conscious of their responsibility to give the neighborhood dog-walkers and bike-riders a moment of visual joy in return for the privilege of existing on public land, in the public eye.

Now a third wave of curbside dining architecture is on its way, and it’s time for New Yorkers to think about what we want from restaurants in return for letting them operate open-air dining rooms on our streets.

The city government is at work on the complicated process of making Open Restaurants, as well as a sister program called Open Streets that temporarily turns stretches of road into car-free zones, permanent after the emergency mayoral order that allows it expires next year. Restaurants still have to follow regulations set by the Department of Health, the Department of Buildings and other agencies, but the transportation department’s new rules will set standards for outdoor dining. As the twin crises of Covid and the threat it posed to a pillar of the city’s economy become less urgent, the city has a new rationale for allowing tables and chairs to take over more than 8,000 parking spaces.

“We have an opportunity to make a permanent and positive change to the quality of life in New York City,” said Henry Gutman, the commissioner of the Department of Transportation, which oversees Open Restaurants and other initiatives that have turned street-parking spaces over to uses the city believes will benefit more people. “The program may have begun as an emergency measure to save” restaurants, he said. “But what we learned in the process is that New Yorkers like outdoor dining.”

Making the city a more pleasant place to inhabit and visit while protecting diners from traffic is, in some ways, a simpler bureaucratic task than fighting an airborne virus or keeping local businesses from financial ruin. But thoughtful regulations can ensure that the exuberant and life-affirming creativity of the past year will continue; overly strict ones could enforce a numbing sameness.

Low or sliding fees and simple forms could help outdoor dining put down roots in areas where people have less money and less experience handling bureaucracy. These spaces could be restricted to eating and drinking, or could be opened to cultural, educational or community pursuits. Business owners could use their streets and sidewalks to welcome their neighbors, or to wall themselves off from them.

Complicating the path to permanence is the handover of power in City Hall that will take place on Jan. 1. There is no guarantee the next administration will be as enthusiastic about Open Restaurants and Open Streets as the current one has been. Because outdoor dining has been so popular with New Yorkers, there hasn’t been much debate about its post-pandemic shape. Other issues, especially crime and homelessness, are likely to dominate the campaigns until November. But the regulations the next mayor signs off on will transform street life in every corner of the city for years to come.

To encourage the kinds of thoughtful designs and collaborations that will make the city a more interesting place to inhabit and visit, three nonprofit groups that advocate better use of streets and other public spaces are holding a new competition, the Alfresco Awards. Entries are still being accepted for the $500 prizes, which will be given out in July.

“We want to elevate the nice and good designs and community partnerships, the ones that really fit in with safety and mobility in the streets,” said one of the awards’ organizers, Kate Slevin, an executive vice president at the nonprofit Regional Plan Association.

Don Angie’s checkerboard-fringed cabins, designed by GRT Architects, are in the running. So are other structures that provide both shelter and a jolt of newness to the streetscape: a scale model of an antique passenger train car outside the Hell’s Kitchen bar Dolly Varden; the shady Mediterranean pergola interwoven with vines and flowers at the West Village restaurant Casa La Femme; and the transparent box, delineated by a blue stripe of light, that appears to hover over the sidewalk in front of the NoHo Egyptian restaurant Zooba.

Many of the designs are playful. Some turn the city into a leafy rainforest or a desert oasis. Some, like the mural a volunteer group called Neighborhood Curbside Canvas Project organized for Square Diner in TriBeCa, turn the miles of newly built walls and barriers around the city into artists’ installations.

Other street shacks have a message. Peaches Kitchen & Bar, a Southern-ish place in Bedford-Stuyvesant, Brooklyn, has entered its “Friendship Cabins,” huts whose walls are made of thousands of interlocking clear-plastic bottles. Each bottle is shorter than five inches, but the walls they form are sturdy enough to stand up in winds up to 105 miles an hour. By day they let sunshine filter in, and by night they refract the headlights and taillights of passing cars into kaleidoscopic patterns of red and white.

In addition to seating six people each, the Peaches cabins are advertisements for an idea, said Josh Draper, who designed them as an extension of his work as a researcher at the Center for Architecture, Science and Ecology at Rensselaer Polytechnic Institute. The supplies flown into areas hit by hurricanes or earthquakes typically include thousands of plastic water bottles. Once empty, these create environmental havoc. But if the bottles used the interlocking design of the ones at Peaches, Mr. Draper said, they could be immediately repurposed for building emergency shelters.

Ms. Slevin said that after the Alfresco Awards, her group and its partners in the program, the Design Trust for Public Space and the Tri-State Transportation Campaign, will draft a set of design guidelines for affordable, durable and accessible street-dining structures. The guidelines will be offered to the transportation department and business owners. The groups also plan to give out $10,000 grants to help small businesses and community organizations take advantage of Open Restaurants and Open Streets in parts of the city that were hardest hit by Covid.

Although street and sidewalk dining areas appear to be everywhere, they’re not. Open Restaurants has allowed nearly 12,000 restaurants and bars to operate outdoors, far more than the cumbersome sidewalk-cafe permit process it replaced. But outdoor dining locations are sparse on Staten Island, in eastern Queens and in the Bronx, where fewer than 700 applications have been approved, the lowest total in the five boroughs.

In a report last September, the state comptroller’s office noted that the Open Restaurants program had given more than half of all the restaurants in several extended neighborhoods of Manhattan the green light to put tables on the street or sidewalk. In three large swaths of the Bronx, by contrast, the rate was lower than 25 percent.

The Regional Plan Association intends to push the city to help fund groups and businesses that have not been able to access Open Streets and Open Restaurants so far, Ms. Slevin said.

The Department of Transportation already provides some financial support to local groups that manage some Open Streets programs. As for giving money to restaurants, “I’m not sure that’s been considered at this point,” said Mr. Gutman, the commissioner. “But aiding them in terms of making it as easy as possible to participate is clearly on our to-do list.”

Mr. Gutman called it “likely” that the city would begin charging some fee for using streets and sidewalks. “But our focus will be on accessibility. So if in fact a fee structure will be imposed, it will be a priority that it not become a barrier to participants.”

Barriers that already exist are being tackled by several volunteer efforts. Since last March, Design Advocates, a nonprofit group of about 250 architecture firms and individuals, has offered advice and assistance to help restaurants and community organizations cope with the pandemic and the rules governing outdoor structures.

In some cases, they have worked with community-development organizations to target neighborhoods that were left behind, sending teams of designers to assist restaurants in the northwest Bronx and Jackson Heights, Queens. The most intriguing Design Advocates projects treat restaurants as more than isolated private businesses.

One project in the Bronx was an outdoor dining installation for Tropical Rotisserie, a Dominican-American takeout chicken shop in the Kingsbridge neighborhood that has no indoor seating. The structure was designed to be flexible so it could double as an open site for community groups to meet.

Two artists, the brothers Felix and Dexter Ciprian, “transformed it into a sort of phantasmagorical expression of Dominican identity using painted lumber, discarded shutters, plexiglass off-cuts, and paint,” said Michael K. Chen, a founder of Design Advocates. “There was a digital projector and a screen, too,” used to show images of the neighborhood, including food products and ingredients that Asian and Latino populations in the area held in common.

The installation has since been removed, Mr. Chen said, “but that project started to open our eyes to some of the possibilities of how outdoor dining could capture some of the value that restaurants hold for people in the city.”

The idea of outdoor restaurants as community centers has occurred to others, too. Playground Coffee Shop in Bedford-Stuyvesant used its Open Restaurants parking spaces to build a greenhouse where neighborhood children can dig, plant and harvest vegetables — essentially an off-label use for the Open Restaurants program.

“This is the thing that is really exciting about this period,” Mr. Chen said. “Even now, a year in, every single thing in the street is a prototype. There are solutions out there that are really compelling for the future of what the street is.”

Before the pandemic, almost all restaurants in New York operated entirely in privately owned indoor space. The great move to public outdoor space demands a paradigm shift in how restaurants see themselves.