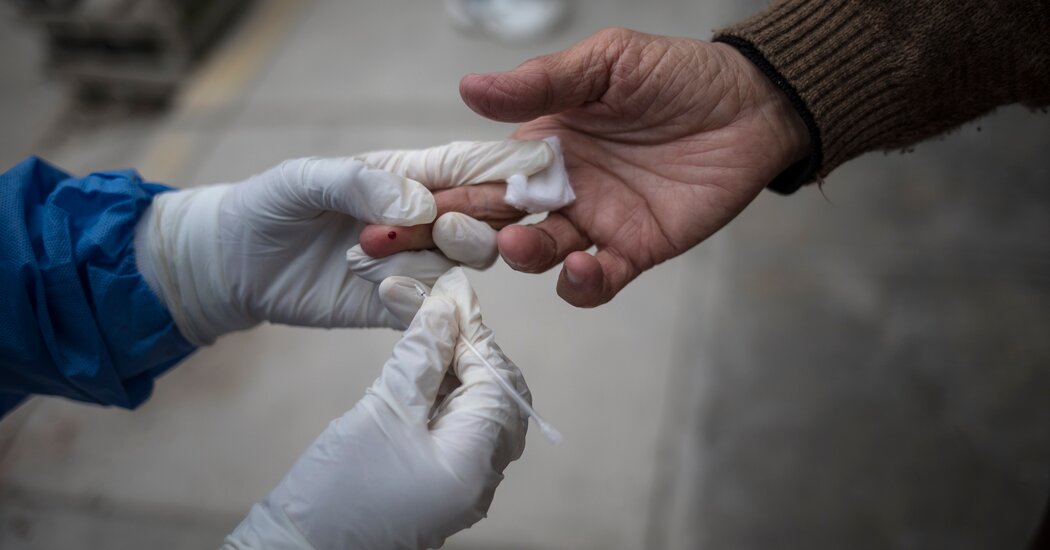 A new type of test can detect a person’s immune response to the coronavirus better than a widely used antibody test, according to research released on Tuesday.

The test, if authorized by the Food and Drug Administration, would be the first commercial product to detect the response of a T cell — a type of immune cell — to the virus. Antibodies have dominated the conversation on immunity since the start of the pandemic, but scientists believe that T cells may be just as important in preventing reinfection.

The test was developed by Adaptive Biotechnologies, a company based in Seattle. The company used small blood samples from 1,000 people across 25 metropolitan areas in the United States as well as another 3,500 participants from Europe to create the test, which can detect a recent or past infection of the coronavirus.

The company’s data has not yet been reviewed for publication in a scientific journal, but experts say the work is promising for assessing T cells’ role in the illness caused by the coronavirus.

Exposure to a pathogen rouses multiple arms of the immune system: antibodies, but also immune cells that can marshal the fight against the intruder.

“What we’re developing is essentially a way to look at that cellular part of immunity,” said Dr. Lance Baldo, chief medical officer of Adaptive Biotechnologies.

Antibodies have so far hogged much of the attention — mostly because testing for them is quick and easy. But levels of antibodies tend to wane after the active illness is resolved and may be undetectable within a few months.

Several studies have suggested that T cells that remember the virus persist for at least six months. “There’s a growing realization that T cells are important and may even be a better indicator of clinical outcome” than antibodies, said Alessandro Sette, an immunologist at the La Jolla Institute for Immunology in California.

But isolating T cells is an elaborate and onerous process, severely limiting the information about their role.

Each of the trillions of T cells present at birth carries a unique receptor on its surface that can spot a different molecule, or antigen, from potential invaders. This enormous diversity among T-cell receptors enables the human body to recognize virtually any new pathogen that it may encounter (although a vast majority may never meet their match.) But it also makes it painfully onerous for scientists to identify the 20 or 30 T cells among the trillions that can recognize fragments of a specific pathogen like the coronavirus.

“One of the brutal things about immunology is that all white blood cells look the same,” said Shane Crotty, a virologist at the La Jolla Institute for Immunology. “You can’t even tell B cells from T cells, let alone T cells specific to a virus.”

To find the T cells specific to a virus, researchers must first separate the bulk of immune cells from a few milliliters of blood, which takes time. Then they wash and count the cells, and stimulate them with pieces of the virus to identify the tiny pool of T cells that respond. The cells that are activated release a molecule called gamma interferon that serves as a signal of their activity.

A single researcher can process no more than five blood samples over the course of a day and a half.

“That’s pretty much why every single paper that is done on T cells, the number of subjects that are studied is never higher than 100,” said Dr. Antonio Bertoletti, a virologist at Duke NUS Medical School in Singapore. “There has also never been great demand for wading into the intricacies of T cell tests.”

Adaptive Biotechnologies has a completely different approach: Instead of looking at the cells, the company focused on sequencing the proteins on the cells’ surface.

Every person has a different repertoire of the trillions of T cell receptors, known as TCRs. But at least some of those TCRs are identical to those in other people. “We call those public T cell receptor sequences, because, theoretically, many people across the population will elicit those responses,” Dr. Baldo said.

When the pandemic started, Adaptive Technologies had already been working with Microsoft to design a TCR-based diagnostic test for Lyme disease, a project made possible by the advent of fast and inexpensive sequencing technologies.

Pivoting to the coronavirus, the team identified 135,000 public TCRs that recognize 545 fragments of the virus. About 11 of these 545 antigens elicit the largest immune response, the researchers reported in September. (Only one of these antigens, the spike protein, is being used to develop vaccines.)

In the new work, the team analyzed samples from 2,200 people in Vo, Italy, which tested all 2,900 of its residents for presence of the coronavirus in March, when cases were soaring there. The researchers’ test, called the T-Detect, correctly identified 97 percent of those who had a confirmed diagnosis, compared with 77 percent from a commercial antibody test called DiaSorin. The results are freely available in a database called ImmuneCode.

The company is creating a point-of-care test for the general public that can diagnose prior infection, as well as a sophisticated version for vaccine companies interested in tracking T cell responses to their candidates.

Experts not involved in the work praised the company’s innovative approach, but said they wanted to see evidence that the test was specific to the coronavirus.

“There isn’t a consensus out there now that you can take TCRs from one person that are specific for a given person and tell that another person is infected with the virus in a consistent way,” Dr. Crotty said. “If they’ve figured out a way to do that that’s awesome, but it’s pretty novel.”

A commercial test also would not offer people information beyond evidence of past infection, cautioned Akiko Iwasaki, an immunologist at Yale. But if the test is specific to the new coronavirus, she said, “it will give us a much more sensitive way of measuring whether a person has been exposed.”

The test may also offer insights into Covid-19. And about 5 percent of patients who are severely ill show a “tremendous drop” in their T cell response, Dr. Baldo said. But in a vast majority of people, the T cell response seems to peak around Day 10 and persists for many months, he said, adding: “We’re seeing an earlier, a more robust and even a more durable T cell response as opposed to the antibody response.”