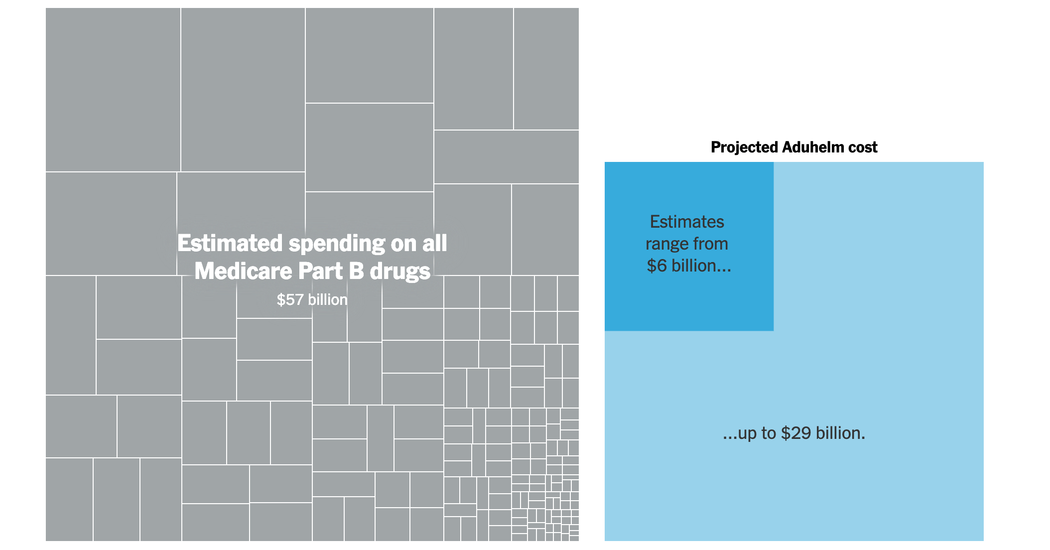 A newly approved drug to treat Alzheimer’s disease is expected to become a multibillion dollar expense for Medicare. By one projection, spending on the drug for Medicare’s patients could end up being higher than the budgets for the Environmental Protection Agency or NASA.

There’s little evidence that the drug, Aduhelm, slows the progression of dementia, but the Food and Drug Administration approved it this month. Analysts expect that Medicare and its enrollees, who pay a share of their prescription drug costs, will spend $5.8 billion to $29 billion on the drug in a single year.

Plenty of other drugs cost more than Aduhelm, which is made by Biogen and will be priced at $56,000 annually. What makes it different is that there are millions of potential customers, and the drug is expected to be taken for years.

The drug’s approval has aroused criticism from health policy experts and pharmaceutical researchers for its lack of proven effectiveness. Effective or not, if widely prescribed, it could have an overwhelming impact on Medicare’s budget because the public program covers the vast majority of the nearly six million Americans with an Alzheimer’s diagnosis.

There is little precedent for a sudden spending jolt of this size. Even at the low end of projections, Aduhelm would become one of Medicare’s most expensive drugs.

At the high end, analysts say the new drug could cause a 50 percent increase in Medicare’s annual spending on drugs delivered in hospitals and doctor’s offices (as Aduhelm, which is given intravenously, would need to be).

The comparisons here are approximate: A third of Medicare enrollees are covered through private Medicare Advantage plans that do not release detailed information on the drugs provided in doctor’s offices. To estimate that spending, we used the drug spending data for Medicare enrollees in the traditional public program and increased it to account for the missing share.

Spending on this scale, so suddenly, could have far-reaching impacts for Medicare, its users and taxpayers. The addition of $29 billion a year to Medicare’s budget would be paid for by increases in both taxpayer spending and in the premiums paid by all Medicare users. Premiums might also go up for supplemental plans many Medicare beneficiaries buy to offset costs the program doesn’t pay directly. And the costs are likely to spill over into state budgets, where Medicaid pays premiums for low-income Medicare enrollees.

Congress, budget experts and several White Houses have spent years suggesting ways to trim spending in Medicare, a large and growing share of the federal budget. But many of these proposals are politically difficult to achieve — and most would save less than the projected cost of Aduhelm.

“It’s so much work to get savings that are really much smaller than this one drug would cost,” said Joshua Gordon, the director of health policy at the Committee for a Responsible Federal Budget, who says he has found himself thinking nonstop about the challenges raised by Aduhelm since its approval.

Cost predictions vary because analysts aren’t sure how many patients will ultimately use the new drug. The F.D.A.’s approval could apply to everyone diagnosed with Alzheimer’s disease — around six million people. But the drug was developed for a smaller group of around 1.5 million patients who are in the early stages of the disease. Analysts aren’t yet sure whom doctors will recommend the treatment for, and which families will want to try it. The F.D.A. has asked Biogen to continue studying the drug until 2030, but prescribing could become widespread before there are any further public results on how well it works.

Allison Parks, a Biogen spokeswoman, said in an email that the company would focus on reaching the type of patients who were studied in the company’s clinical trials, “in the early symptomatic stage of the disease.”

The range reflects a variety of reasonable expert estimates. The high estimate, drawing on a Kaiser paper, assumes that about a quarter of the two million Medicare enrollees who currently take an Alzheimer’s treatment will take this one. The low one is based on a Cowen and Company analyst estimate of $7 billion in total sales by 2023.

Estimating how many patients will use the drug is challenging. Aduhelm is not just expensive, but also somewhat hard to take, requiring monthly in-person visits to an infusion center for treatment. Patients who take it will be required to get multiple brain scans during their treatments to look for side effects.

And the side effects themselves — about 40 percent of patients in one clinical trial showed signs of brain swelling — may discourage some patients from trying the drug, and prompt others to stop taking it. (The many scans — and treatments for more serious side effects — would also be covered by Medicare.)

There are six million Medicare enrollees who do not purchase supplemental coverage who could have to pay 20 percent of the drug’s cost, in this case $11,200 a year.

Demand may nevertheless be high from families who see an opportunity to intervene when faced with a devastating diagnosis. Until now, there have been few treatment options available for patients hoping to forestall cognitive decline from the disease.

“There is something intrinsically hard about having a loved one, seeing the clock ticking, and saying, Well, let’s just wait,” said Dr. Steven Pearson, a primary care physician and the president of the Institute for Clinical and Economic Review (ICER). “It’s very hard to ignore the drive to do something.”

Doctors, who would administer this drug and be paid a percentage of the drug’s high price by Medicare for that work, may face financial incentives to say yes when patients ask for it.

“The implications of this one drug and the associated set of procedures are enormous,” said Rachel Sachs, a law professor at Washington University in St. Louis and an author of a recent essay in The Atlantic asserting that the drug could “break American health care.”

Private insurers may erect roadblocks to treatment, requiring patients to get additional tests or prove that other options haven’t worked. But in normal circumstances, Medicare covers drugs that are approved by the F.D.A. Medicare decides what drugs to cover based on whether they are “reasonable and necessary,” not on how much they cost.

Medicare is initially required to pay for this type of drug at its list price in addition to a 3 percent fee to the doctor who gives it. And then, after about a year on the market, it pays the average sales price plus 6 percent. For drugs with competition, that average price can be substantially lower than the sticker price. But for a drug like Aduhelm, which is the first of its kind, the drugmaker may not offer doctors discounts.

Medicare, which covers 61 million Americans 65 and over, does have some tools to contain costs. It could decide to cover the drug in a way that is more limited than the F.D.A. approval, a break from its normal practice.

Or it could do something even more unusual: An unexpected alliance of advocates has suggested that Medicare put the drug into a randomized experiment to evaluate how well it works — paying to cover the drug in some parts of the country, but not others. Such policy experiments were authorized under the Affordable Care Act, but one has never been used to limit coverage of a drug in this way.

Other countries will most likely control the cost of Aduhelm by negotiating with Biogen for a lower price, or simply decline to buy it at all. Most will consider the drug’s effectiveness when deciding what they are willing to pay. So far, the drug has not been approved for use anywhere else in the world.

Medicare can’t do that. Because of the way it pays for drugs under current law, it has no way to bargain down the price. Democrats increasingly support legislation to change that. The House passed legislation in 2019 that would give Medicare the authority to negotiate some prices, but it died in the Senate. Legislators reintroduced the same bill in the House in April.

President Biden supports allowing Medicare to negotiate drug prices but did not include the policy in his proposed American Families Plan.

Dr. Pearson of ICER has estimated that if the new drug’s effectiveness were taken into account, a fair price would be $2,500 to $8,300.

“It will be interesting to see if this starts a discussion about fair pricing in the United States,” he said. “To most people’s eyes, this looks like an outstanding example of a price that just does not match up with the evidence.”

Methodology: Estimated current spending on Medicare Part B drugs was drawn from the Centers for Medicare and Medicaid Services Part B Drug Spending Dashboard, and adjusted up by 54 percent to account for Medicare beneficiaries enrolled in Medicare Advantage plans. Because of the demographics of who is in which program, this assumption may overestimate current drug spending.)

Medicare Part D drug spending was drawn directly from the C.M.S. Part D Drug Spending Dashboard, and may represent an overestimate because those numbers do not include all rebates paid to drug plans.

The high Aduhelm spending estimate comes from a Kaiser Family Foundation paper. The low estimate is derived from a total sales estimate from Cowen and Company, and adjusted to account for an estimated 80 percent of Alzheimer’s patients early in their disease enrolled in Medicare — and Medicare’s initial 3 percent payment to doctors for overhead and administration.