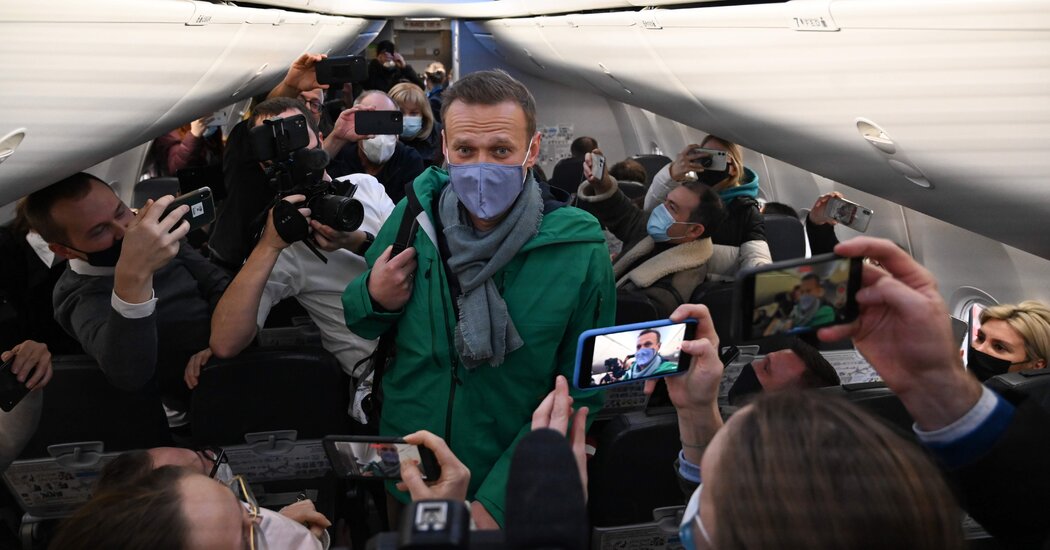 MOSCOW — Aleksei A. Navalny, the Russian opposition leader who recuperated in Germany from a near-deadly poisoning, returned to Moscow on Sunday despite the Russian government’s promise to arrest him upon arrival.

Mr. Navalny’s daring trip forces the Kremlin to make a decision with far-reaching consequences. Arresting Mr. Navalny could set off protests and an international backlash. Letting him go, after he accused the Kremlin of trying to murder him in YouTube videos viewed more than 40 million times, could be seen as a sign of weakness.

“I want to say a big thanks to everyone, and I hope that we will make it,” Mr. Navalny said as he boarded the plane in Berlin on Sunday, according to a livestream. “I am sure that everything will be absolutely great.”

He noted he was sitting in Row 13. His wife, Yulia Navalnaya, accompanied him.

Just before takeoff, Mr. Navalny posted a video to Instagram in which Ms. Navalnaya, who was seated next to him on the plane, quoted from a popular Russian crime drama: “Bring us some vodka, boy. We’re flying home.”

Mr. Navalny’s flight on the low-cost, Russian state-owned carrier Pobeda — meaning “Victory” — landed just after 8 p.m. local time, or noon in New York. The flight was delayed departing from Berlin and then was diverted from Moscow’s Vnukovo Airport, where his supporters had gathered, to Sheremetyevo Airport.

At Vnukovo, scores of journalists and Navalny supporters had gathered in the arrivals hall, where the international arrivals section had been sectioned off with a tall screen. Police officers in uniform and plainclothes at one point walked up to Lyubov Sobol, a prominent ally of Mr. Navalny, as she dined at an airport cafe.

They took her by the arms and led her away, along with several associates.

Riot police officers in shiny black helmets and camouflage, using the cordoned-off underground passageway below the arrivals hall as a staging area, soon ascended from below and filed into the hall. They pushed the crowd waiting to pass through metal detectors outside and detained some people, leading them outside or down the stairs.

Vladimir Murzin, a 50-year-old legal consultant, was turned away by the police when he tried to enter Vnukovo because he did not have a plane ticket. He said he and several others traveled from Tambov — a 300-mile drive — to greet Mr. Navalny. The opposition leader’s poisoning in August, he said, had raised his “years-long fury at the unfairness of what is happening in our country under the Putin regime.”

“This is a man whom the masses will follow,” Mr. Murzin said of Mr. Navalny. “Every citizen who disagrees with the current regime needs each other’s support.”

Even before the trip, the authorities were laying groundwork for Mr. Navalny’s arrest and increasing pressure on his backers.

A camera operator who works with Mr. Navalny, Pavel Zelensky, was jailed on Saturday on suspicion of “inciting extremism” in a three-month-old tweet, according to his lawyer. An activist in the St. Petersburg region who planned to drive to Vnukovo reported that the van he was going to take to Moscow — bearing the slogan “Say no to Putin!” — was seized by the police. Ms. Sobol earlier tweeted that plainclothes agents were trailing her and her child from aisle to aisle at the grocery store.

Russia’s federal prison service released a lengthy statement on Thursday accusing Mr. Navalny of “malicious violations” of a suspended prison sentence he initially received in 2014. While recuperating in Germany last year, the service said, Mr. Navalny failed to report to it twice a month as required by his sentence.

“The Federal Penitentiary Service of Russia in Moscow is obliged to take all actions to detain the violator A.A. Navalny pending a court decision to replace the suspended sentence with a real one,” the statement said.

But analysts said that despite the bureaucratic drumbeat, the final decision over Mr. Navalny’s fate would be made in the Kremlin. In years past, the authorities have avoided locking Mr. Navalny up for longer than a few weeks at a time, apparently to avoid allowing him to become a locus of opposition to President Vladimir V. Putin while in prison.

Still, his prominence rose, along with Russians’ discontent. Mr. Navalny’s populist and tough-talking style, slick and humorous YouTube videos, and relentless derision of the “crooks and thieves” in the ruling class all struck a chord with Russians frustrated by corrupt officials and stagnant incomes.

The government barred him from running for president in 2018. But Mr. Navalny, who is 44, built up a nationwide network of regional offices and drew an online audience of millions for his video exposés of the hidden wealth and the foreign real estate holdings of the Russian elite. He exhorted Russians to use regional and local elections — even though they are not free and fair — to chip away at Mr. Putin’s power by supporting opposition candidates who had the best chance of winning.

Mr. Navalny fell ill from the poisoning in August, while returning from a trip to Siberia before elections there. He could be heard screaming in the airplane bathroom before he collapsed. The pilot’s quick emergency landing, and Mr. Navalny’s immediate treatment on the ground in the city of Omsk, most likely saved his life, his doctors later said. After a standoff, Mr. Putin agreed to let the comatose Mr. Navalny be flown to Berlin for treatment.

In Germany, a military laboratory determined that Mr. Navalny had been poisoned by a chemical from the Soviet and Russian-developed Novichok family of nerve agents. Mr. Navalny regained consciousness and pledged to return to Russia, while blaming Mr. Putin for the attempt on his life.

In December, evidence emerged to back up that version. The research group Bellingcat, working with the Russian news outlet The Insider, used leaked phone records to show that officers from a secret Russian spy unit with expertise in poisonous substances trailed Mr. Navalny for years and were nearby when he was presumably poisoned.

Mr. Navalny then placed a call to a man he said was a member of the unit assigned to assassinate him and pretended to be a senior Russian official seeking to debrief him. In a video viewed more than 20 million times on YouTube, Mr. Navalny can be seen extracting a confession from the man, who describes a plot to plant the poison on the inside seam of the crotch area of the opposition leader’s underwear.

Mr. Putin denied the accusations. He told journalists that Mr. Navalny was working for American intelligence agencies and that if Russian agents had truly wanted to kill him, “they would have probably finished the job.”

Mr. Navalny returned to Russia earlier than many expected. Some analysts had speculated that he would wait until closer to parliamentary elections in September. Moscow’s winter weather — the forecast for Sunday evening is -4 Fahrenheit — tends to discourage mass protests.

On Saturday, Mr. Navalny returned to Instagram to thank his German hosts. Chancellor Angela Merkel had helped arrange his treatment in Germany and visited him in the hospital. He convalesced at a village in the Black Forest, where local news reports described bodyguards, unmarked police cars and even a helicopter ensuring Mr. Navalny’s security.

“Do you hear ‘the kindest, helpful, friendly people’ and not immediately think of Germans?” he wrote. “Then you are wrong. That’s exactly who they are.”

One of Mr. Navalny’s main associates, Leonid Volkov, said in a YouTube video on Wednesday that Mr. Navalny’s imminent return to Russia had put Mr. Putin in a bind.

“If Putin decides to arrest him on arrival, he’ll certainly become the world’s Political Prisoner No. 1 — as with Nelson Mandela,” Mr. Volkov said of Mr. Navalny. “The second alternative for Putin isn’t any better. Leaving Navalny free would mean showing weakness in the eyes of his inner circle.”