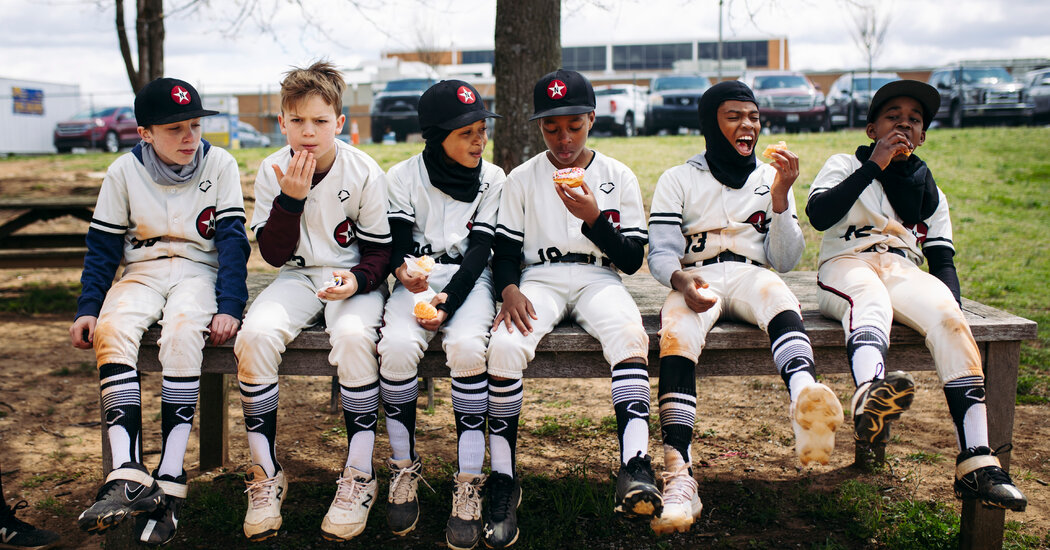 NASHVILLE — It’s fitting that the Nashville Stars, a team for players ages 10 and under, are named in honor of an old Negro leagues team that played in Music City in the 1930s, ’40s, and ’50s. From the aggressive base running to the all-Black coaching staff and the speaker blaring a mix of hip-hop and R&B from the bleachers, the Stars embody the energy and excitement that made pre-integration Black baseball a cultural phenomenon as much as a sporting attraction. The team also serves as a stark contradiction of the stereotypical image of American youth baseball.

For the kids on this team, the majority of whom are Black, baseball isn’t a spring stopgap to hold them over until football season starts, or the free activity sponsored by the community organization that may or may not receive financial support from Major League Baseball. For these kids, baseball is both passion and purpose.

As Major League Baseball and the sport’s wider community celebrates the 75th anniversary of Jackie Robinson’s debut with the Brooklyn Dodgers, the inclination is to look to the past, to examine what Robinson accomplished with his pioneering efforts — and, ultimately, what he didn’t. Robinson’s willingness to turn the other cheek and his ability to succeed in the face of overt racism may have made him an icon and hero, but it didn’t make the sport less hostile to Black people on the whole.

Today, the number of Black players in the majors is at its lowest point since the 1950s, when some teams had yet to sign a Black player, and the number of Black youth in the sport isn’t much higher. According to a report from the Sports and Fitness Industry Association, only 11.1 percent of Black kids played baseball in 2018 — a statistic that impacts the numbers of athletes competing at the highest level.

This lack of participation is often attributed to the high costs associated with youth baseball and a general lack of access to the sport for Black inner-city kids. But the Stars aren’t a team of “inner-city kids,” and many of the Black parents in the program don’t have a problem buying $300 bats and paying for extra training fees. Here, their children find refuge from other challenges that plague the youth game, and thanks to the leadership of Black men who are committed to pushing Robinson’s legacy forward, they are able play the game they love without compromise.

If you ask Ro Coleman Jr. and D.J. Merriwether, who coach the Stars with Xavier Turner, there was never supposed to be an actual team.

They both grew up with the game — Coleman in Chicago and Merriwether in Nashville — and though they took divergent paths after high school, they knew they’d eventually find themselves back in the community, planting the love of baseball in the hearts and minds of a new generation of Black kids. They also both believed they’d be most useful by providing in-depth training for kids and then sending them off to play for other coaches.

Then fate and necessity intervened.

After playing at Kentucky Wesleyan and then at Crichton College in Memphis, Merriwether returned to Nashville and, in 2016, launched Beyond the Diamond. The developmental program provided youth baseball training with a focus on helping kids find benefits from the game beyond a college scholarship or shot at playing pro ball.

“The whole thing for me was not saying that every kid is going to make the major leagues,” Merriwether said. “It’s about using baseball to create other avenues for kids, like it’s created for myself. Being able to network, to meet a lot of different people from a lot of different places. Being able to sit at tables I never thought I’d sit at. That’s what baseball has done for me.”

Eventually, after enough begging from parents dissatisfied with other programs in the city, he decided to put a team together. Doing everything on his own was taking its toll, but Merriwether forged ahead, noting that he believed if he just kept “planting seeds and trying to build baseball around the city, eventually some things would connect.”

The connection that changed everything came in 2019, when he was introduced to Coleman and Jarrod Parker, the former major league pitcher who had been drafted ninth overall by the Arizona Diamondbacks in 2007. After rehabbing his chronically injured elbow for two years, Parker decided to open a sports training facility, later offering the space to Coleman and the group of training clients he’d begun to cultivate.

Coleman, a former standout at Chicago’s Simeon High School, had won a national championship with Vanderbilt in 2014 before being drafted by the Detroit Tigers after his senior year. He says now that the minors were a drag, and with a degree in hand and no guarantee of making it to the big leagues, Coleman decided to hang up his cleats and head back to Nashville to get to the business of his life’s work. Like Merriwether, he knew the potential of baseball to have a deep impact on the lives of Black kids.

“Growing up, my friends and I wanted to be able to create a change, and we didn’t realize at an early age that we’d have the impact that we do now,” Coleman said. “We just wanted to see more Blacks play the game at a high level.”

Parker was completely sold on Coleman’s vision, and Merriwether proved to be a missing piece of the puzzle that allowed Coleman and Parker to reach an even wider audience. And in 2020 — after partnering with Music City Baseball, an organization working to bring an M.L.B. expansion team called the Stars to Nashville — the Nashville Stars youth program was born.

“Seeing another Black male in Nashville trying to provide opportunities in the game of baseball for African American and other minority kids was something special to see,” Coleman said of Merriwether. “It’s that same passion me and Jarrod had as far as investing in the kids. He’s a real dude; we vibed; and it just took off.”

Playing Where They Should

The Stars began with a team for players 17 and under (17U) in 2020, and after a successful first season (players have already committed to Vanderbilt, Stanford, and some smaller schools), Coleman and crew decided to field teams at the 13U and 10U levels in late summer 2021.

The decision to field a 10U team was right on time for Brandon Hill, who had just relocated his family — including his 10-year-old son Brendon — from Hoover, Ala., to Nashville. Hill says that Brendon fell in love with baseball early, and from a young age, Hill has always sought out Black-run teams.

“I didn’t want him to be treated differently,” Hill said. “I didn’t want to be a part of the good ol’ boy system, or be in a situation where a coach is like, ‘Well he should be playing there, but he can’t because my friend’s son wants to play there and we go out for beers on the weekend.’”

While experts frequently discuss the financial barriers to youth baseball, these parents know that many of the issues impacting the game at the pro level — the isolation Black players feel on teams where few, if any, players look like them, the pressure to switch to positions stereotypically associated with Black players like center field, and the unspoken rules and political maneuvers that exhaust even the most steadfast athletes — permeate the youth game, too. In addition to economic challenges, these are the issues preventing more Black kids from playing the sport.

Before joining Merriwether’s Beyond the Diamond team and ultimately landing on the Stars, Christopher Gordon’s son, Austin, played in a predominantly white program in a suburb just south of Nashville. Though the team had a solid reputation, Gordon says that Austin was pushed into the outfield because the infielders were often coaches’ kids.

“For me, as his dad, I had to make a decision that he needs to be in a program that really is going to invest in him,” Gordon said. “If he’s an outfielder, he’s an outfielder. But I want it to be fair; a level playing field.”

Merriwether moved Austin to second base, and he now alternates between pitcher and other infield positions. Gordon says that he’s also having a lot more fun — and not just because he’s playing a different position.

The total program fees are about $2,400 per year, Coleman said, or comparable to those for most competitive travel teams. The Empowerment Pursuit foundation works with parents to offset costs as much as possible.

According to parent after parent, Black or white, the emphasis on having fun while remaining competitive differentiates the Nashville Stars from other programs in the area. “You move from having parents who are doing it as a second job to having coaches who are doing it as a profession, and the level of investment and quality of coaching just improves overall,” said Kristen Menke, mother of infielder Max Goetz.

Gordon agrees. “It’s awesome to have a program with coaches of this caliber, and to be able to give the kids this type of exposure to the sport that, frankly, when I was growing up, I didn’t even know existed,” he said.

Sometimes, however, that exposure isn’t positive. At a tournament in Lawrenceburg, Tenn., a small town on the Alabama border, the Stars encountered a group of hostile parents from a team from Alabama.

“I think that they were shocked to be losing to a majority-Black team, and they didn’t behave well,” said Menke, who is white. “They felt like the umpires were calling things in our favor when the reality was, things were being called the same way.”

Though Merriwether said the coaches didn’t hear anything on the field, the parents said they heard the parents from opposing team using the n-word and making other crude statements.

It was a wake-up call for Menke, who said that she’d never experienced anything like that but, afterward, was more certain than ever that she’d made the right decision in having her son join the Stars.

At the same time, Merriwether’s past experience allowed him to guide the team and focus on “controlling the controllables.”

“His dad was there, saying, ‘We dealt with this the whole time D.J. was growing up,’ that this kind of stuff has always plagued Black baseball,” Menke said. “And I’m thinking, ‘If our mission is to change the culture of baseball, then we can’t take this anymore.’”

“There’s a community among the team, but it’s also about having this team be a reflection of the community.”

Andrea Williams is a freelance writer in Nashville and the author of “Baseball’s Leading Lady: Effa Manley and the Rise and Fall of the Negro Leagues.”