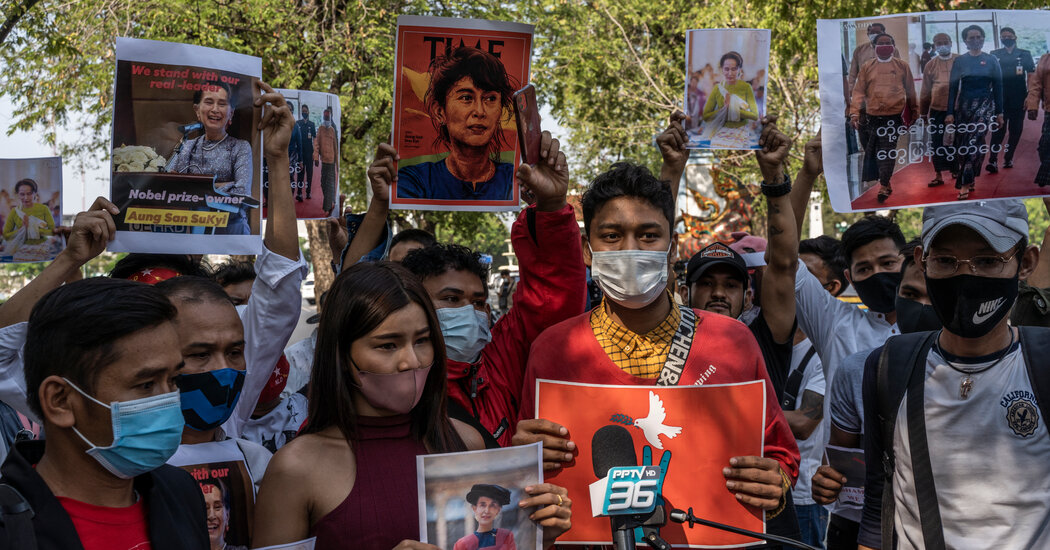 Two days after Myanmar’s military seized power in a coup, the scope of its formal allegations against the country’s civilian leader, Daw Aung San Suu Kyi, are taking shape: She is accused of illegally importing at least 10 walkie-talkies.

It was a bizarre postscript to a fraught 48 hours in which the army placed the country’s most popular leader back under house arrest and extinguished hopes that the Southeast Asian nation could one day serve as a beacon of democracy in a world awash with rising authoritarianism.

The surprise use of walkie-talkies to justify locking up a Nobel Peace Prize laureate reinforced the military’s penchant for using fine-grained strategy to neutralize its greatest political rival. The accusations, which surfaced in a court order on Wednesday, may seem obscure and underwhelming, but they could put her in prison for up to three years.

The court order to detain Ms. Aung San Suu Kyi, which was provided by an official from her party, the National League for Democracy, was dated on the day of the coup and authorized her detention for 15 days. The document said soldiers searching her villa in Naypyidaw, the capital, had turned up various pieces of communications equipment that had been brought into the country without proper paperwork.

The coup unseated an elected government that was viewed by voters as the last defense against a military that had ruled the country outright for nearly five decades. During its five-year tenure the National League for Democracy received two resounding mandates, most recently in general elections last November.

As the predawn putsch progressed, the military resorted to the familiar playbook of dictatorship: shutting down internet service, suspending flights and detaining its critics. Along with Ms. Aung San Suu Kyi, her most loyal ministers, Buddhist monks, writers, activists and a filmmaker were also rounded up.

Still, in the stunned silence that followed the military’s seizure of power, few soldiers patrolled the streets. By Monday evening, Ms. Aung San Suu Kyi was back in her villa in Naypyidaw, rather than languishing in one of the country’s notorious prison cells. There were no further mass detentions. The internet came back online, although the Ministry of Transport and Communications later ordered Facebook blocked through Sunday.

The relative peace — this appeared, so far, to be a largely bloodless coup — propelled some people in Myanmar to cautiously raise their voices against the re-imposition of army rule. While some people removed National League for Democracy flags from outside their homes, others took part in small civil disobedience campaigns, banging pots and pans or honking their car horns to protest the coup.

Dozens of workers at one mobile network quit in objection to their employer’s military links. Doctors at one hospital posed together, each with three fingers raised in a defiant salute from the “Hunger Games” films. The gesture has become a symbol of the pro-democracy demonstrations in neighboring Thailand, where coup rumors have also swirled.

The charge laid against Ms. Aung San Suu Kyi, who served a total of 15 years in house arrest before the generals released her in 2010, echoed previous accusations of esoteric legal crimes. In one case, Ms. Aung San Suu Kyi had her lockup extended because an American man swam up to her lakeside villa unannounced, causing her to violate the terms of her confinement.

But if such crimes seem absurd, they carry real consequences. The military had made a habit of sidelining political rivals and critics by burdening them with arcane offenses.

Along with Ms. Aung San Suu Kyi, President U Win Myint, one of her political acolytes who was also ousted and detained on Monday, was issued a detention order for violating emergency coronavirus regulations. He was accused of greeting a car full of supporters during the electoral campaign season last year, according to U Kyi Toe, the official for the National League for Democracy.

If found guilty, Mr. Win Myint could face three years in prison. Holding a criminal record could preclude him from returning to the presidency.

On Tuesday, the United Nations Security Council, which had convened an emergency private meeting on Myanmar, declined to issue a statement condemning the coup; China and Russia opposed such a move.

In Washington, the State Department said it had concluded the military’s takeover was, indeed, a coup d’état, a label that will affect some American foreign aid to the country.

Myanmar’s military, known as the Tatmadaw, staged its first coup in 1962, a bloody exercise that paved the way for nearly five decades of iron-fisted direct rule. Ms. Aung San Suu Kyi and leading lights of her National League for Democracy were locked up during what should have been their political prime.

The generals ordered the massacres of pro-democracy demonstrators and dispatched soldiers to clear members of ethnic minority groups off their lands. Even when the junta began giving a civilian administration some space to operate, it ensured the army would still control much of the economic and political sphere. The military also intensified its violent oppression of Rohingya Muslims, a campaign that Ms. Aung San Suu Kyi failed to condemn.

Confirmation of the charge against Ms. Aung San Suu Kyi, who was awarded the Nobel Peace Prize in 1991 for her peaceful resistance to the army, trickled out on Wednesday amid a whirlwind of rumors. Early in the afternoon, lawmakers with the National League for Democracy traded scraps of misinformation, even as they were under military detention themselves.

One rumor had it that she would be charged with high treason, a crime punishable by death. Another iteration said she was being accused of electoral fraud. No one guessed that her supposed sin would involve walkie-talkies.

In a statement released on Tuesday by the office of the army chief, Senior Gen. Min Aung Hlaing, the Tatmadaw said it had acted in the best interests of Myanmar’s citizens.

“Throughout the successive periods, the Myanmar Tatmadaw has been keeping in fore the motto ‘People Are the Parents,’ when it comes to the people,” the statement said, before insisting that mass voter fraud in elections last November had compelled it to stage a coup.

The National League for Democracy, which oversaw the nation’s electoral commission, rejected the Tatmadaw’s accusation that voter manipulation had led to a poor showing by the military’s proxy party.

On Wednesday, National League for Democracy lawmakers who had been confined to their living quarters by soldiers issued a statement saying they still supported Mr. Win Myint as president. They rejected suggestions that they had been relieved of their legislative duties. The national assembly was supposed to convene for the first time since the November elections on the very day of the coup.

“Stop the intervention actions,” the lawmakers cautioned the Tatmadaw. It seemed a warning two days too late.