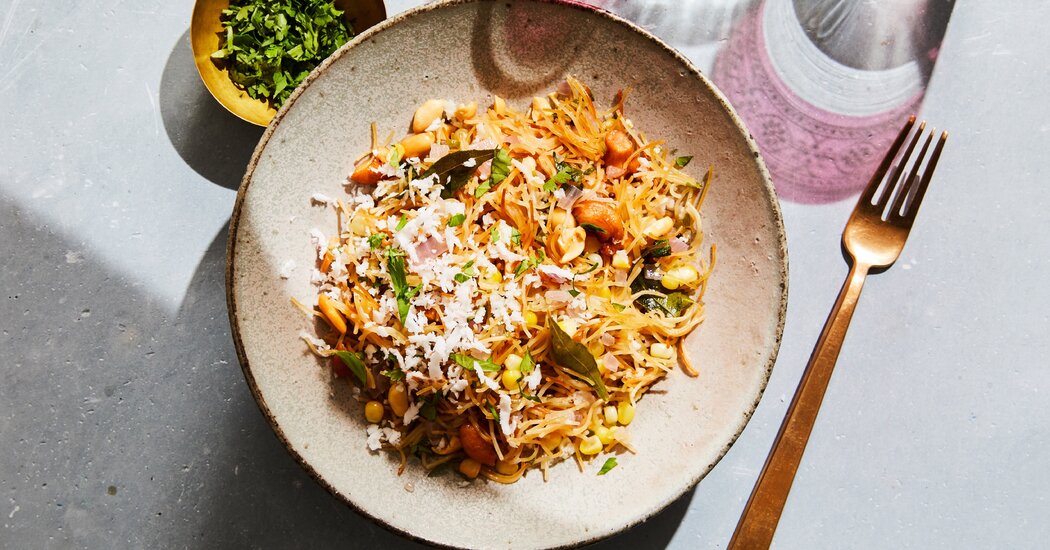 When I visited my Auntie Sulu in India, she cooked three meals a day and wrote out the plan for each one on a sheet of paper that she kept by the phone in her apartment. The idea of such a plan suggests a certain rigidity, but no, this was a shared, living document. It included, for each meal, the company my auntie expected and the menu, no matter how simple, and it was constantly revised. An edit might become necessary to include someone’s favorite dish; or to make room for a snack we’d forgotten we all wanted but that had come up in conversation; or to add the names of more friends dropping by; or to account for a spontaneous trip to our favorite chaat vendor, which necessitated a later dinner; or for the pile of ripe custard apples someone had brought home, which had to be eaten immediately.

All day long, we referred back to this schedule to stay on the track she laid for us, and as the days went by, it included more and more scribbles, crossed-out words, loops and arrows — the days we might have had, but didn’t, still visible. And it cataloged the days we did have. We referred to the document, internally and affectionately, as the Program. And though I’m neither a breakfast person nor a morning person, I always stuck to it. I made sure to get up early to catch hot breakfasts at 8 a.m., to get glasses and teacups on the table and to try and make myself useful. But really, the point was simply to hang around with my auntie as much as possible.

Upma can be many things — home cooking, fast food, cheffy.

When I was a kid, there was no one cooler. She wrapped her hair in a silk scarf and rode an old scooter through the dusty, pitted streets of Pune to her job as a school principal. She sewed all her own clothes, then repurposed the scraps. She played badminton with friends on the weekends, enthusiastically and maybe even a bit viciously. It seemed as if she knew how to do everything. And because she let me join her for anything and everything, I did.

I’m sure it was never her intention for me to feel nostalgic for the old Programs, which is almost certainly why I do. The Programs were ordinary and functional, efficient and useful. (What could be more moving than that?) They were never guarded in a scrapbook, but tossed away — more likely, recycled — when the week or month was up. I don’t have to look at one to remember the breakfasts, though. My auntie almost always made some kind of upma for breakfast or, as she called it in Konkani, usli. Upma is a delicious, basic South Indian dish made from seasoned and sautéed semolina, noodles and other quick-cooking starches. It can be many things — home cooking, fast food, cheffy. A decade ago, Floyd Cardoz won the title on “Top Chef Masters” with upma — “upma worth $100,000,” reported The Hindustan Times with a wink. He cooked semolina in coconut milk, and a lot of it, so the final texture was creamy and soft, and he surrounded the upma with wild mushrooms. My auntie was so tickled by the idea of a restaurant chef’s winning an American cooking competition with upma, of all things.

She made upma for breakfast from semolina, rice flour and fine vermicelli noodles, made from wheat, and sometimes rice. She made upma with sago, the squishy pearls made from palm starch, and poha, the almost translucent pieces of dry, beaten rice, hydrated in a little water. Each one was different, but always had a little tempering of spices and dal, chiles, coconut and maybe a little sugar, often with some vegetables thrown in, like fresh peas and carrots, or potatoes and tomatoes. When I make it now, usually on the weekends as a late breakfast or lunch, the plan is no plan. The basic tempering stays the same, and I build the dish as I go, adding whatever I have on hand, from some fried okra, to a bunch of blanched edamame from the freezer, to a whole cob’s worth of sweet-corn kernels.