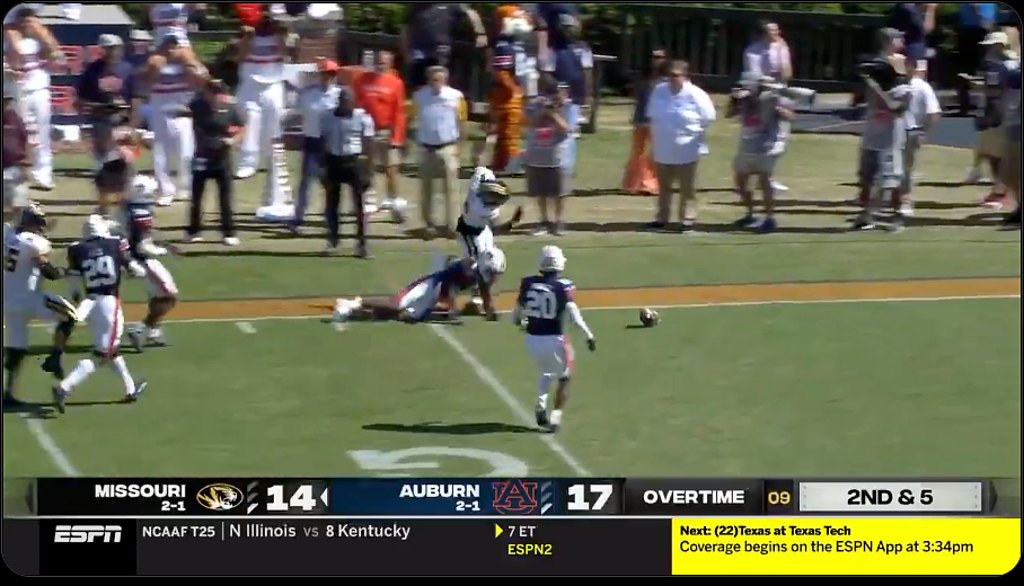 Missouri and Auburn met on Saturday in a matchup of SEC programs both headed in the wrong direction, and the result was a fittingly ugly football game that featured special teams miscues, horrific offensive performances, and arguably the dumbest ending to a game since the FSU-LSU game in Week 1.

We’ll pick things up in the fourth quarter, when Auburn got stuffed on third and short and then fourth and short in Mizzou territory with two minutes to play, giving the ball back to the other Tigers in a 14-14 game. From there, Mizzou hit an extremely rare big play with a pass over the top of the Auburn defense to the three, setting themselves up for what seemed like an assured win. However, as anyone who watches college football knows, a field goal is never guaranteed, so when they decided to play for the field goal by moving backwards instead of just trying to score a touchdown, it wasn’t hard to see what was coming.

The kicker pushed it wide right from 25 yards and the game went to overtime. In overtime, Auburn threw a near interception on third down that just bounced off the ground, and then a shanked field goal was given second life because Mizzou jumped offsides before the kick. Auburn would hit the kick on the second attempt, taking a 17-14 lead.

That meant a Mizzou touchdown would win the game, and they started to get things moving on the ground immediately. On 2nd and 5, Nathaniel Peat broke through the defense and down the sideline, seemingly for the winning score, but as he stretched the ball out to reach the goal line, he dropped it before getting there, with Auburn recovering in the end zone for the game-ending touchback instead.

It’s hard to express how dumb this game was and how absurd it is that Auburn won, but despite Bryan Harsin being on the hot seat and staring down being fired for a loss in this spot, Auburn Jesus still resides at Jordan-Hare Stadium and picked quite the time to reappear.