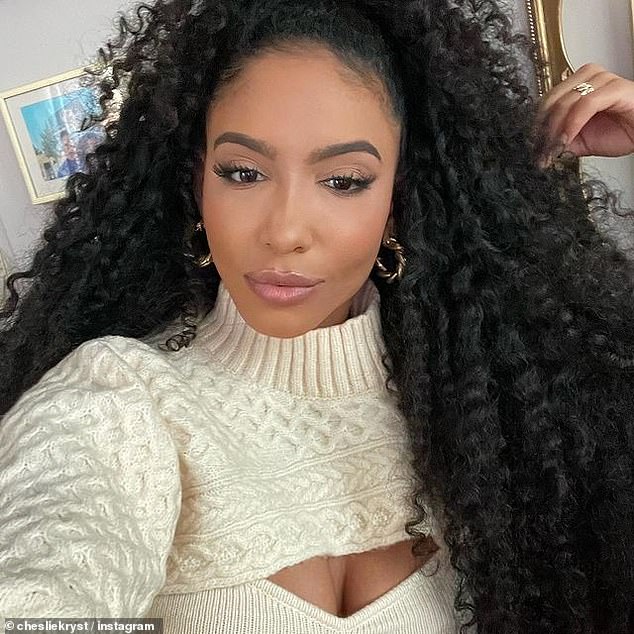 Former Miss USA Cheslie Kryst jumped to her death from a skyscraper in New York City on Sunday morning – hours after posting a message on social media saying, ‘May this day bring you rest and peace.’

Kryst, 30, was a lawyer and also worked as a correspondent for the entertainment show Extra. She won the Miss USA pageant in 2019 using her platform to speak out about social and criminal justice reform.

Kryst, who had an apartment on the ninth floor of the luxury building on West 42nd Street in midtown Manhattan, leaped from the 29th floor of the 60-story high-rise around 7:15am and was found dead on the snow-covered sidewalk.

She jumped from an area that was open to the whole building after being last seen on the 29th-floor terrace, sources said.

Only hours before, Kryst wrote on her Instagram page, ‘May this day bring you rest and peace.’

Kryst posted her final picture on Instagram on Sunday morning writing: ‘May this day bring you rest and peace’

Kryst is pictured wearing her Miss USA banner in February 2020

Police found a note in the apartment stating she wanted to leave everything to her mother, a former pageant winner.

There was no explanation for her actions in the note.

‘Not only beautiful but she was smart — she was a lawyer,’ a police source told the New York Post. ‘She has a life that anyone would be jealous of. … It’s so sad.’

As Miss North Carolina, Kryst captured the Miss USA tiara wearing a sparkly winged outfit for the national costume competition, in a nod to Maya Angelou’s ‘I Know Why the Caged BIrd Sings.’

During the competition, she described herself as a ‘weird kid’ with a ‘unibrow’ who’s now part of the first generation of truly empowered women.

Asked in the final round to use one word to summarize her generation, Kryst  said ‘innovative.’

‘I’m standing here in Nevada, in the state that has the first female majority legislature in the entire country,’ she said. ‘Mine is the first generation to have that forward-looking mindset that has inclusivity, diversity, strength and empowered women. I’m looking forward to continued progress in my generation.’

Kryst obtained her law degree from Wake Forest University School of Law in Winston-Salem, North Carolina where she was involved in a number of activities, including the National Black Law Students Association, according to her LinkedIn page

Kryst was born in Jackson, Michigan, to a white, Polish-American father and black mother, April Simpkins, a winner of Mrs. North Carolina in 2002. She grew up in Charlotte and graduated from the University of South Carolina.

She went on to get her law degree from Wake Forest University School in Winston-Salem, North Carolina, where she was involved in a number of activities, including the National Black Law Students Association, according to her LinkedIn page.

After passing the bar, she worked as an associate attorney at Poyner-Spruill LLP in Charlotte between September 2017 and May 2019 as a member of the firm’s civil litigation team.

She did pro bono work to reduce sentences for inmates.

In a statement, Kryst’s family described her as ‘one that inspired others around the world with her beauty and strength.’

‘In devastation and great sorrow, we share the passing of our beloved Cheslie,’ the statement said.

‘Her great light was one that inspired others around the world with her beauty and strength. She cared, she loved, she laughed and she shined. Cheslie embodied love and served others, whether through her work as an attorney fighting for social justice, as Miss USA and as a host on Extra.

‘But most importantly, as a daughter, sister, friend, mentor and colleague – we know her impact will live on. As we reflect on our loss, the family asks for privacy at this time.’

Kryst would often share her feelings to her Instagram followers and had said social media was all for show.

‘My Instagram is my highlight reel and I want to look my best while I share a look at my life, my fun, and the body I’m proud of. But that’s all it is. A fine-tuned glimpse into a moment in time. Don’t allow what you see on here make you forget that I’m incredibly flawed; I simply chose not to share those flaws in a photo,’ she wrote last June.

‘And definitely don’t compare your own flaws to what you see in this picture or any others on my page. It’s not fair to compare 100% of yourself, your good days, bad days, and everything in between to a highly curated fraction of me on my best days.’

In October 2019, Kryst spoke out on Facebook for World Mental Health Day. She offered tips on how she coped with stress.

‘I do a lot to make sure that I maintain my mental health and the most important thing that I did is talk to a counselor. She’s really easy to talk to. She gives me great strategies especially if I’m sad or happy or have a busy month ahead of me.

‘When I’m not talking to my counselor, I spend time at the end of every single day to just decompress,’ Kryst said. ‘I unplug, I shut my phone off, I don’t answer messages. I just sit and watch my favorite movies.’

She aired similar sentiments during an interview with The Hilltop.

‘There are three things that I’m doing with regard with self-care,’ Kryst began.

‘Two, I try to set very clear boundaries, so even though I’m at home and I’ve got my computer, my phone with me, I’m done answering emails at 6 o’clock, I’m not responding to messages. It’s over.

‘Third, have a regular workout schedule that keeps my body healthy and my mind sharp.’

At the time, Kryst, was a 27-year-old lawyer from North Carolina who represented prison inmates for free

‘I can’t say pageants make you beautiful. I think they make you more confident in the person that you are,’ she said during her pageant

Kryst is pictured on her first day at her law firm. She revealed her struggles with sexism at work

Kryst said her interest in pageants began when she was 10 years old, watching her mother ride a horse-drawn carriage in a parade when she was named Mrs. North Carolina in 2002.

‘It was a time in my life when I didn’t’ know who I was and wasn’t confident in myself. I was that little weird kid who had a unibrow and didn’t have any friends. My hair was always pulled back. I thought I want to be just like her,’ she said.

Kryst then went on to compete in pageants in high school.

‘I can’t say pageants make you beautiful. I think they make you more confident in the person that you are,’ she said.

‘I’m still that same weird kid. I still like reading books. And at the end of the day, I like to sit by myself in my house and just watch movies. But I think pageants taught me all that, and my mom was really the one who introduced me to that and drew me to pageantry.’

Kryst, a former Division I athlete and attorney at Poyner Spruill LLP in Charlotte, North Carolina, won her crown in Reno, Nevada in 2019

Kryst had been working as a correspondent for the entertainment show Extra and had received two Daytime Emmy nominations for her work. She is pictured here interviewing Taylor Swift

Cheslie Kryst, 30, died after she leaped to her death from a 60-story Midtown apartment building. She would often be seen striking a pose around the city in fashionable clothes

Sources say Kryst was alone when she jumped and was last seen on a 29th-floor terrace.

In October 2019, Kryst spoke out on Facebook for World Mental Health Day. She offered tips on how she coped with stress.

During the Miss USA contest she told a story of when a judge at a legal competition told her to wear a skirt instead of pants because judges prefer skirts.

‘Glass ceilings can be broken wearing either a skirt or pants,’ Kryst said.

She told reporters afterward she’ll never forget being in law school at Wake Forest participating in a moot court competition in Louisiana with a panel of judges who provided very little feedback to her and her partner.

‘We stood there for 30 minutes after practicing for months and all you said was wear a skirt next time?’ she said. ‘It was very frustrating. Don’t tell females to wear different clothes while you give the men substantive feedback on their legal arguments.’

Kryst said she didn’t feel nervous as she advanced through the elimination rounds.

‘I just kept hearing my name get called,’ she said. As she waited for the winner to be announced, “All I could think was, ‘This is really cool.'”

Kryst jumped from the 60-story Orion building, where she had an apartment on the ninth floor. She had last been seen on a terrace on the building’s 29th floor

Later police identified the person as Cheslie Kryst. Kryst was an attorney, a 2019 Miss USA title holder and was a host on Extra

Sadly, there was little that could be done to save the former Miss USA winner

In recent Instagram postings, there was nothing to suggest unhappiness or mental strain

After receiving her Miss USA 2019 crown she became a news correspondent for Extra, earning her two Daytime Emmy nominees.

‘Our hearts are broken. Cheslie was not just a vital part of our show, she was a beloved part of our ‘Extra’ family and touched the entire staff,’ read a statement from the show she worked on. ‘Our deepest condolences to all her family and friends.’

Before joining the daily gossip show she founded the fashion blog White Collar Glam. Kryst had also modeled for Express and served as an ambassador for the retail company.

She was also on the National Board of Directors for Big Brothers Big Sisters of America.

The National Suicide Prevention Lifeline is available for those in distress: 1-800-273-8255.