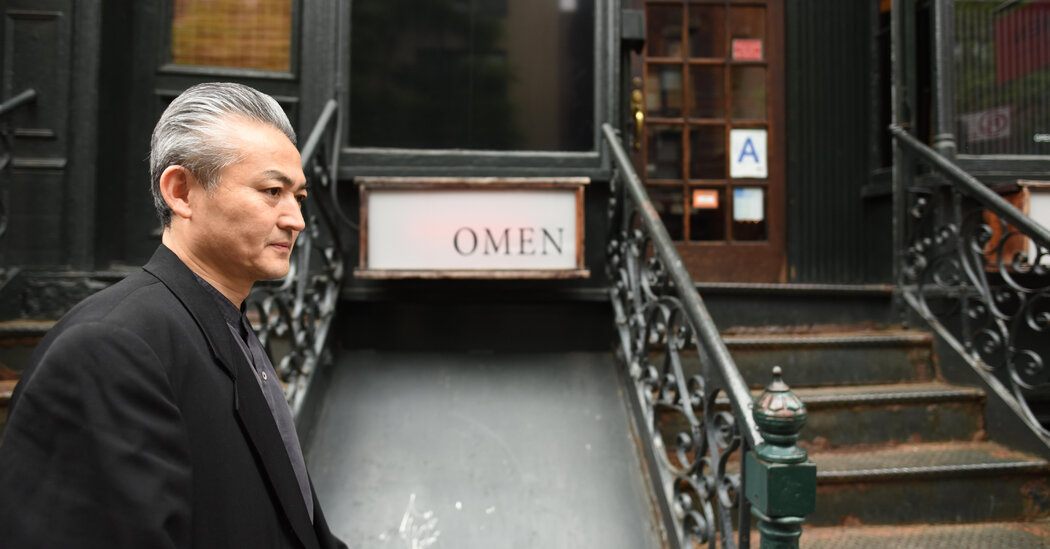 Mikio Shinagawa, who as a painter studying Buddhism in the 1980s opened the Japanese restaurant Omen, which became a downtown New York canteen for figures in the art and fashion worlds, died on Nov. 17 at a hospital in Kyoto. He was 66.

His sister Mariko Shimizu said the cause was liver cancer.

As fashionable haunts in New York go, Omen was an unlikely candidate, and Mr. Shinagawa, a serene silver-haired man raised in Kyoto who wore Comme des Garçons suits, was its ethereal anti-restaurateur. When the city’s creative stars congregated at his restaurant to converse over sake, he glided through the place dispensing hospitality with the lightness of a friendly phantom.

Situated on Thompson Street in SoHo, Omen’s dark wood space is lined with red brick walls and rice-paper lanterns that glow as the music of John Coltrane and Miles Davis plays softly. The menu consists of Japanese country-style food and dishes like chiso rice and udon noodles. Calligraphy framed above the tables contains brushstrokes that evoke the Japanese character mu, which means nothingness.

As Julian Schnabel raised a family, his children played at the table while he ate. Richard Gere can find solace there knowing that paparazzi cameras won’t flash in his face. If Patti Smith drops in for a late-night bite, she might sing a song for the kitchen staff.

“When I started coming to Omen, I was drawn into the inner community,” Ms. Smith said in a phone interview. “You’d always see well-known people, but no one bothered them, and that atmosphere came from Mikio. He infused the air with an inner peace, and he served the artist. The lightness that emanated from him created a sense of belonging, making you feel part of an abstract spiritual family.”

“The last time I saw Lou Reed alive was there,” she added. “He came in with Laurie Anderson, and that’s where I said goodbye to Lou, at Omen.”

Mr. Shinagawa didn’t call attention to his clientele, but he could do little to conceal it during New York Fashion Week, when the industry descended upon Omen to discuss the shows over spicy tuna tartare. The restaurant’s fashionista devotees have included the designers Karl Lagerfeld and Derek Lam, the photographers Mario Sorrenti and the duo Inez and Vinoodh, and the Italian Vogue editor Franca Sozzani.

Mr. Shinagawa often remarked that he never understood why his restaurant became a scene. Perhaps his regulars enjoyed basking in its harmonious atmosphere, or maybe they just really liked his black codfish marinated in miso. Whatever the reason, he didn’t give it much thought.

“Why Omen?,” he mused in a 2013 interview with T: The New York Times Style Magazine. “I would like to know why Omen is so charming.”

He elaborated in a 2014 interview with the fashion brand Opening Ceremony’s blog.

“We are just t he glass for them to get together,” he said. “I appreciate people with beautiful minds.”

In the years before Mr. Shinagawa opened his restaurant in 1981, SoHo was desolate and abandoned, and its low rents lured artists who settled into its cavernous lofts. From this bohemia Omen emerged, and over time it became a vestige of an older neighborhood, along with holdouts like Raoul’s and Fanelli Cafe.

Mr. Shinagawa arrived in the city in the 1970s with aspirations of making it as a painter. He’d spent his teens traveling through Europe and India, he was studying Buddhism, and he’d shaved his head. At his cramped studio in the meatpacking district, he painted abstract works in solitude. Eventually, his parents visited him.

In Japan, they ran the original Omen restaurant, which they had founded in the 1960s with a health-minded ethos, and which became the first of three locations in Kyoto. In New York, they grew alarmed at the American diet, so they pitched their son an idea.

“After two weeks, they felt this community, this society, was so unhealthy,” Mr. Shinagawa said. “They felt American culture needed better food. So, after returning to Japan, they asked me if I’d like to run a restaurant here.

“It was a dynamite question. I didn’t know. I was practicing Buddhism. But I eventually decided that everything we do in this life, even running a restaurant, can be a practice in making life richer, brighter.”

Mr. Shinagawa enlisted craftsmen from Japan to build Omen’s rustic interior and named the restaurant after what became its signature udon dish. Little by little, Omen became a hangout.

Yet even as Mr. Shinagawa’s restaurant turned into a downtown institution, and even as New York drastically changed, one thing remained the same: It has never been very hard to get a reservation at Omen.

Mikio Shinagawa was born in Kyoto on Feb. 19, 1955, to a family with a noble lineage that can be traced back to the Asuka period. His father, Tetsuzan, was a revered calligraphy artist. His mother, Tomi (Okada) Shinagawa, opened the family restaurant after tasting her mother-in-law’s country-style food in the mountainous Gunma Prefecture. As a boy, Mikio watched his mother prepare omen with fragrant broth for customers.

In 1998, he published a book of his father’s calligraphy, “Talk to a Stone,” which featured an introduction by the Dalai Lama. The calligraphy hanging on Omen’s walls was drawn by his father.

In addition to his sister Mariko, Mr. Shinagawa is survived by two brothers, Hiroshi and Masaki, and another sister, Kyoko Nakamura.

In his late 40s, Mr. Shinagawa became a founding owner of the Japanese restaurant Matsuri, which occupied a subterranean space in the Maritime Hotel in Manhattan; a few years later he designed the Shibui Spa, located in Robert De Niro’s Greenwich Hotel, which was built using parts he’d salvaged from an ancient Japanese farmhouse.

In recent months, Mr. Shinagawa had been busy preparing for Omen’s 40th-anniversary celebration, which occurred last week. At an intimate memorial held at the restaurant on Friday, longtime regulars recited tributes to him and Ms. Smith sang an a cappella version of her song “Wing.” His sister Mariko, who helps run Omen, flew in from Japan to oversee the transition of his business, which his nephew, Kota, will now manage.

Although Mr. Shinagawa tended to shrug off questions about why, precisely, Omen became a cherished downtown institution, his sister formed her own opinion.

“Mikio ran Omen, but he was also an artist in his heart,” she said. “Because he had creativity inside him, he understood artists. Whether it was Jasper Johns or Richard Gere, they could tell that he understood what it means to create.”

“It was a natural connection,” she added. “The kind of connection that is almost impossible to express in words.”

Homemade Holiday Food Gifts to Please Everyone on Your List