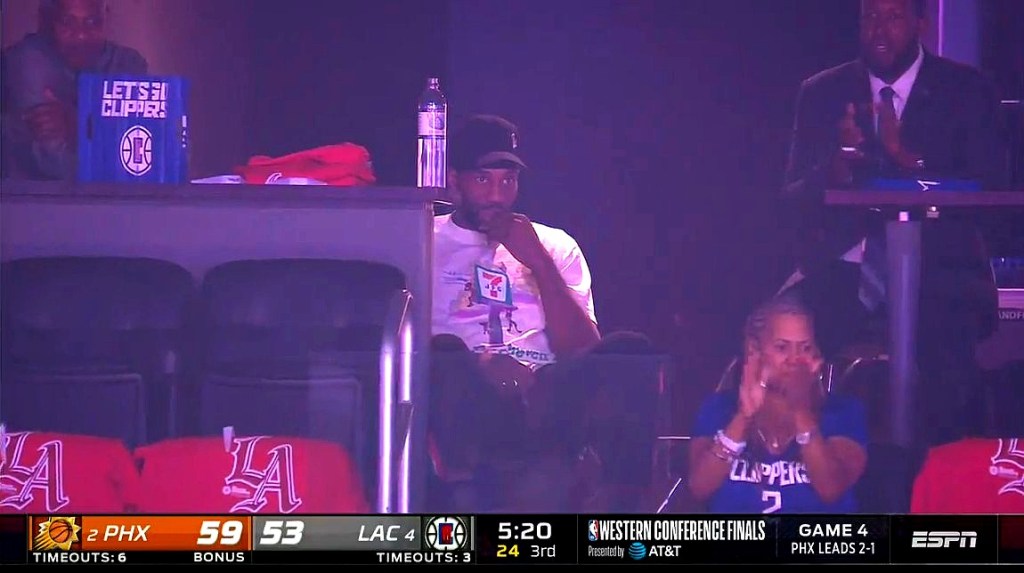 The Phoenix Suns were in control for much of Game 4, taking a 14-point lead into halftime as the Clippers came out flat offensively and struggled to knock down outside shots, but much like Game 3, the third quarter saw L.A. come alive, making an extended run to cut the lead down to as little as a one-point game late in the period.

Midway through the quarter saw the Staples Center crowd reach a fever pitch, with Paul George hitting a tough midrange jumper to cut the Phoenix advantage to six points as L.A. started to really get it going on the offensive end. Mike Breen, the master of matching his call to the intensity of the moment noted that the crowd was going wild and ESPN made the incredible choice to cut to Kawhi Leonard showing absolutely no emotion in his box seats at that very moment, leading to an all-time great Breen call.

Breen’s emphasis on “Kawhi Leonard’s going crazy!” is just sensational, and gets a laugh out of Mark Jackson who enjoyed the joke about the ever-stoic Leonard just sitting there, taking it all in as the crowd is in total pandemonium. Breen isn’t known for his levity, particularly compared to contemporaries like Ian Eagle or Kevin Harlan, but when he does make a joke it is almost always a delight for that very reason because it feels so unexpected. Leonard provided the perfect opportunity and Breen knocked it out of the park.