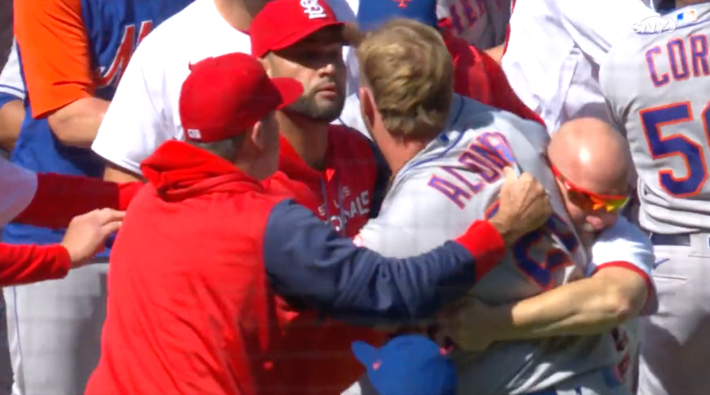 An early season matchup between the New York Mets and St. Louis Cardinals got tense after Mets pitcher Yoan López threw up and in to Cardinals designated hitter Nolan Arenado. During the previous half-inning, Mets third baseman J.D. Davis got hit on the foot by a pitch from Genesis Cabrera, and had to leave the game as a result.

Yet another Mets hit batsman — their league-leading 19th — and it appears to have gotten J.D. Davis on a sensitive spot. He’s leaving the game following a fastball to the left foot/ankle area.

Hit enough batters, someone will eventually get hurt. pic.twitter.com/q1uA7ibaNl

While X-rays were negative, Davis getting hit led to López retaliating in the bottom of the eighth with a 94 mile per hour fastball that was just a little too close for Arenado’s liking. The six-time All-Star was visibly upset with López, and it didn’t take long for both benches to clear, both bullpens to empty, and some pushing and shoving to take place.

At one point, Mets slugger Pete Alonso found himself pulled to the ground from behind by Cardinals coach Stubby Clapp — after they hit the deck, Alonso got up while Clapp was still holding onto him.

St. Louis would go on to win the game, 10-5, which helped them avoid getting swept in the three-game series against New York. The win put the Cardinals at 10-7 at this early point in this season, a half-game back of the Milwaukee Brewers for first place in the NL Central, while the Mets are still clearly in first place in the NL East at 14-6.