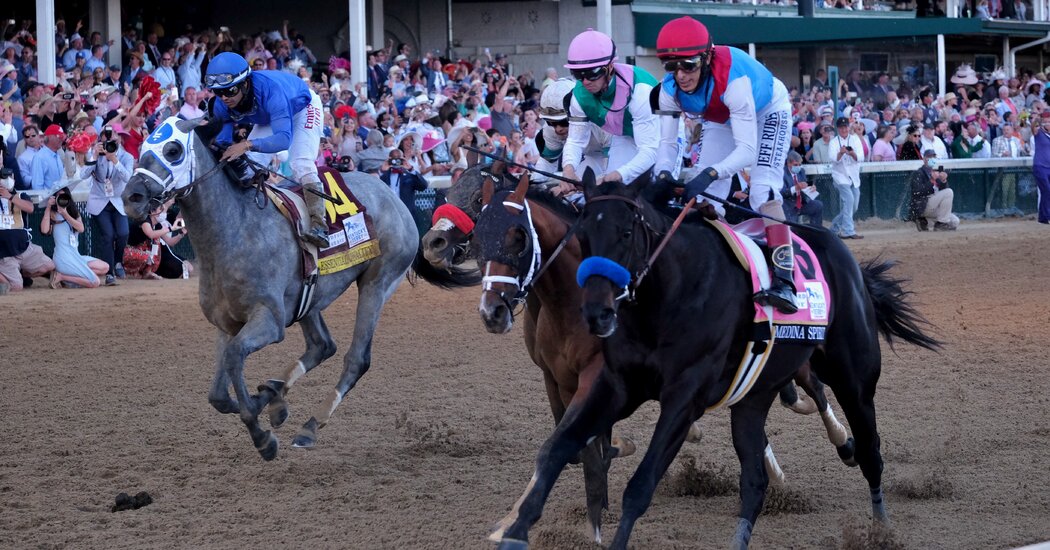 LOUISVILLE, Ky. — On another first Saturday in May, the beauty of America’s oldest sport battled neck and neck down the stretch with its unseemliness as a colt named Medina Spirit elegantly held off a determined challenge from Mandaloun.

They moved in tandem like four-legged ballet dancers — effortlessly, beautifully. No one here who loved thoroughbred racing could catch a breath after Medina Spirit crossed the finish line half a length ahead of Mandaloun and comfortably ahead of the pre-race favorite, Essential Quality.

It was a victory that came with an asterisk, as achievements in horse racing so often do.

Much of the news made lately by Baffert has not been good. Regulators in Arkansas last month upheld a ruling that a banned substance had been found in two of Baffert’s horses, but they decided to reduce his penalty from a suspension to a fine.

Baffert is the dominant competitor and the most questioned one in his sport, which recently prompted the passage of federal legislation that would bring in the United States Anti-Doping Agency — the organization that enforces drug rules in Olympic sports — to monitor horse racing.

“I’m the luckiest guy in the world,” Baffert said moments after his record-breaking victory. “I’m so spoiled bringing these heavy-duty horses in here, and this little horse has a big heart.”

The bittersweet aftertaste of Medina Spirit’s victory threatened to eclipse the achievement of the colt’s rider, the Hall of Fame jockey John Velazquez. At 49, Velazquez had not exactly been left for dead but was thought to be pulling the shades on the twilight of his career.

This was his fourth Derby triumph and, in a calendar turned topsy-turvy by a coronavirus pandemic that has left all of us battered, his second in nine months. It left him tied for Derby wins with the great Bill Shoemaker and one behind the immortals Eddie Arcaro and Bill Hartack.

Last fall, when Velazquez won aboard Authentic, he returned to the jockey’s room and burst into tears. This time, he said he was grateful that a horse that even Baffert did not think much of had overachieved.

“Every time I asked him to give more, he kept fighting on,” he said. “When you ride a horse like this who is competitive, you can’t ask for anything else.”

The pandemic led organizers to run the 2020 Derby last September in front of empty seats, but on Saturday, America’s greatest horse race was back.

The mint juleps flowed while exuberant hats and pocket squares bobbed through the grandstand and clubhouse of the famed Churchill Downs. But there were fewer of all of them: the track was at a third of its 150,000-person capacity, especially earlier in the day, when it felt like a club way past last call.

The tease and torment were all on display as horse racing took its springtime turn in the spotlight. There were fresh faces that promised to bring a new, more favorable kind of attention to horse racing. Kendrick Carmouche, in his first Kentucky Derby at 37, was trying to become the first Black jockey to win the race in 119 years.

His appearance on a long shot named Bourbonic added to Black riders’ long history in the sport. Oliver Lewis won the first Derby in 1875, and 15 of the first 28 editions of the race were won by Black jockeys, most recently Jimmy Winkfield in 1902.

Essential Quality promised excitement and a new lens for viewing the sport.

A gray son of Tapit, Essential Quality came to Churchill Downs with a gaudy résumé, as the reigning 2-year-old champion and the owner of a 5-for-5 record. His trainer, Brad Cox, is a Louisville native coming off the finest year of his career, having won four Breeders’ Cup races and having been named the champion trainer for 2020.

Essential Quality’s rider, Luis Saez, is one of the top young jockeys in the country and was looking for redemption after memorably guiding a colt named Maximum Security first across the finish line here in the 2019, only to be disqualified for almost knocking over a rival horse and slowing the momentum of others.

But the following year, Maximum Security’s trainer, Jason Servis, would be among more than 27 people charged by federal prosecutors in a wide-ranging scheme to secretly dope horses and cheat the betting public.

When it came to controversy, though, doping and disqualifications finished a distant second to the questions surrounding Essential Quality’s owner, Sheikh Mohammed bin Rashid al-Maktoum, the ruler of Dubai.

Sheikh Mohammed has spent vast sums in Central Kentucky to build a breeding and racing operation, but failed to win the Derby in 11 previous starts. While horse racing people wanted to talk about his money and perseverance, human rights lawyers in the United States and abroad were focused on the sheikh’s role in the disappearance of Sheikha Latifa bint Mohammed al-Maktoum, one of his daughters.

Sheikha Latifa has been seen in videos saying that her father is holding her captive in Dubai and that she fears for her life. “He only cares about himself and his ego,” she said.

The United Nations has demanded that Sheikh Mohammed produce proof that his daughter is still alive, and a group from the University of Louisville law school filed a complaint with the Kentucky Horse Racing Commission, asking it to bar the sheikh and Essential Quality from the Derby.

The claim was quickly dismissed for innumerable reasons that could be seen on a pastoral drive through the heart of the bluegrass territory where the sheikh has collected farms and fast horses.

Essential Quality finished a game fourth. Saez did not get his redemption. Cox had the double heartbreak of watching his other horse, Mandaloun, come up just short.

“He absolutely ran his heart out,” said his jockey, Florent Geroux. “We just got beat.”

The record will reflect the cold hard facts of a sometimes warm and squishy game of perception: Medina Spirit covered the mile and a quarter in 2 minutes 1.02 seconds and paid $26.20 on a $2 bet to win.

At the end of the day, a sport that both transfixes and repels did both again.

“This never gets old,” said Velazquez, rightfully one of the happiest men in horse racing after his victory.

Yeah, well, too often it does.