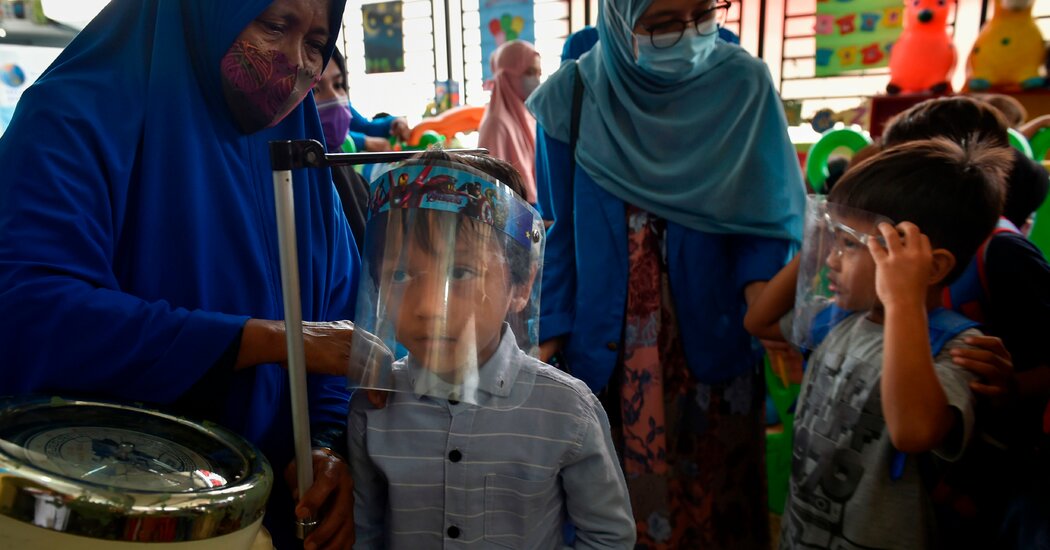 Measles deaths worldwide swelled to their highest level in 23 years last year, according to a report released Thursday, a stunning rise for a vaccine-preventable disease and one that public health experts fear could grow as the coronavirus pandemic continues to disrupt immunization and detection efforts.

The global death tally for 2019 — 207,500 — was 50 percent higher than just three years earlier, according to the analysis, released jointly by the World Health Organization and the Centers for Disease Control and Prevention. No measles deaths were reported in the United States, but measles cases in the country hit a record annual high of 1,282 across 31 states, the most since 1992, according to figures updated earlier this month. As recently as 2012, the U.S. case number was 55.

Public health experts said the soaring numbers are the consequence of years of insufficient vaccination coverage. They worry that the pandemic will exacerbate the spread of measles, a disease that is even more contagious than Covid-19.

“We are worried that there are new gaps in immunity opening because of Covid on top of those that were already there,” said Dr. Natasha Crowcroft, senior technical adviser for measles and rubella at the W.H.O. “We can’t carry on in the same way and expect a different result,” she added, calling for more resources and creative applications of them.

Although reported cases of measles so far have been lower this year, public health experts are holding those figures at arms’ length. They fear such numbers are a drastic undercounting, because of the pandemic’s global disruptions to health care, therefore reducing detection and medical care for measles — as well as prevention efforts.

Measles outbreaks have already occurred this year in at least half of the 26 countries that had to suspend vaccination campaigns because of the pandemic. As of this month, 94 million people are at risk for missing measles vaccines, according to the W.H.O. While measles cases may indeed be somewhat suppressed as a collateral effect of precautions to prevent the spread of the coronavirus, experts say that, at best, the current low figures represent only a temporary lull.

Details of the international measles outbreaks were reported by the Measles and Rubella Initiative, an international consortium that includes the W.H.O. and C.D.C. as well as the American Red Cross, UNICEF and the United Nations Foundation. The group highlighted the grim numbers to reinforce its message: that vaccination efforts should persist, especially during the pandemic, when health care resources are being exhausted.

As a positive example, public health leaders point to Ethiopia, which had lagged behind many countries in its immunization rate for measles. In collaboration with the C.D.C. and other organizations, Ethiopia set up a vaccination campaign in June that included more protective equipment for health care workers and timed, socially distant appointments, and reached 14.5 million children.

International epidemiologists compare last year’s eruption of measles to a slow-building forest fire that finally exploded. For a decade, vaccination rates worldwide have stagnated, guaranteeing good coverage in many regions, but still not achieving the high percentage needed to shut down the contagion. Many outbreaks, including 25 in the United States last year, originated with travelers from other countries.

In addition to low-income countries hit heavily by measles, public health experts noted with alarm that middle-income countries such as Ukraine, North Macedonia, Georgia and Kazakhstan were now prominent on the roster of the most affected. Alarmingly, the numbers of “zero-dose” children — those who had received no vaccines whatsoever — are beginning to rise again, with middle-income countries, including Brazil, Mexico and the Philippines, accounting for 9.5 million, or 69 percent, of that total.

Growing skepticism about the safety of vaccines worldwide has contributed to depressed vaccination rates. But also, said Dr. Robin Nandy, chief of immunization for UNICEF: “There was a growing amount of complacency and taking the foot off the gas pedal in some high-coverage countries.”

At the same time, he added, “We are still missing a large proportion of kids in areas beyond the reach of health services — rural, or in urban slums, or where there is armed conflict.”

Efforts to eliminate measles largely amount to a decades-long story involving the coordination of teams from the world’s wealthiest cities and its most impoverished outposts. Indeed, from 2010 through 2016, cases and deaths related to measles had declined to 18 cases per one million people.

But at the same time, vaccination coverage began to stall. To prevent a measles outbreak, 95 percent of a population must receive two measles vaccines. But since 2010, rates for the first vaccine, ideally given when a child is about a year old, have been stuck at a worldwide average of about 85 percent; while comprehensive coverage for the second shot, typically given between ages 4 and 6, has increased, it is now only at 71 percent.

And every day, babies are born. The cumulative number of the unvaccinated or under-vaccinated mount. By 2019, reported cases worldwide amounted to 120 per 1 million.

“What’s scary now is that our essential public health workers have been refocused from diagnosing, testing and reporting suspected measles cases to Covid-19,” said Robb Linkins, an epidemiologist at the C.D.C. who is chair of the Measles and Rubella Initiative’s management team. “With measles,” he said, “you have to be relentless.”

The measles mortality rate in high-income countries like the United States is virtually nil, because general health is already good and the health care system is robust. But last year’s high number of measles deaths worldwide is a terrible testimony to poor health care as well as under-vaccination, Dr. Linkins said.

“It’s just hard for me to believe that kids are dying of a disease that we’ve had a great vaccine for, for 50 years.”