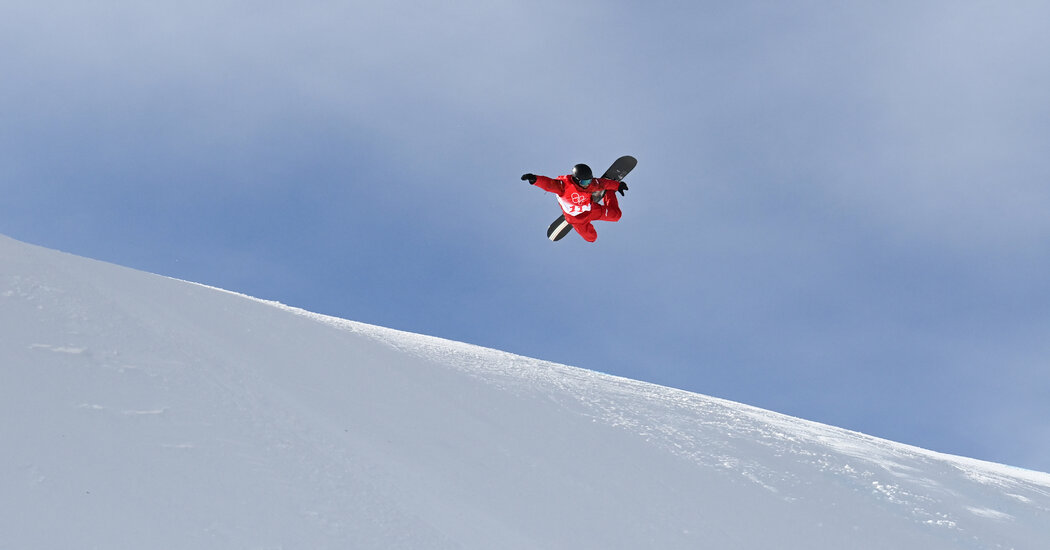 The slopestyle course at Genting Snow Park in Zhangjiakou has received mostly rave reviews for its difficulty and its Great Wall-themed design. On Monday, its centuries-old evocation, made of snow, served as a stage for some next-era acrobatics.

Twelve finalists in men’s snowboard slopestyle took three turns each, navigating a series of tricky rails (and one snow-covered faux rooftop meant to look like a guardhouse) and three giant jumps, a can-you-top-this exhibition. Only their best score counted.

In the end, it was Max Parrot who claimed gold, followed by Su Yiming of China and Mark McMorris of Canada. It was the third-straight Olympic slopestyle contest where McMorris won bronze.

“As my brother would say, ‘rose gold,’” McMorris said.

Parrott’s victory caps a comeback from cancer since the last Olympics. A 27-year-old from Quebec, he was diagnosed with Hodgkin lymphoma in December 2018, 10 months after winning a silver medal in slopestyle at the Pyeonchang Games. He was declared cancer-free in 2019.

“Three years ago exactly, at this particular date, I was laying down in the hospital bed, going through 12 treatments of chemotherapy. I had no more muscles, no more energy, no more cardio. I wanted to quit sometimes because it was so hard just to get to the next morning. To be standing here three years later, and winning gold, that is completely crazy.”

Su, 17, arrived to these Olympics as the biggest wild card, a possible show stealer. Most Chinese snowboarders did not compete internationally the past couple of years because of the pandemic. The team re-emerged on the global circuit this winter with a deep roster and a litany of impressive tricks.

McMorris remembered Su from past competitions and appearances in China since 2010.

“I’m seeing this little kid, he’s always around and he loves snowboaring more than anything and idolized me,” McMorris said. “And then, boom, this fall — he’s just so damn good. He became a man.”

Su won the season’s first big air competition, in Colorado, and then had the best qualifying score in the Olympic preliminary heats on Sunday.

That made him an instant celebrity in China — he was already known by some as a child actor, according to Chinese state media.

He had a solid first run in the final, then a spectacular second one. With a front flip off the guardhouse near the top of the course, he landed three big jumps. The last, an 1800 (five rotations), ended with Su thrusting his arms in the air, lifting fans in the grandstand to their feet, flags waving.

It was a dizzying show throughout. Some of the attempted tricks had so many spins that they were hard to count without slow-motion replay. After each run, the judges studied the moves, counted the rotations, assessed the style and spit out numbers that shuffled the rankings.

Defending Olympic champion Red Gerard of the United States took an early lead by landing a pair of 1620s (four-and-half-rotations) sandwiched around a double-cork 1080, with its off-axis, corkscrew rotation. Judges scored it at 83.25 points.

That was the score that others chased. Parrot passed it first, with a 90.96 on his second run, with three consecutive triple corks.

The real chase was on.

McMorris, 28, was searching for his first Olympic gold medal. He earned a bronze medal at both the inaugural Olympic slopestyle contest at the 2014 Sochi Games and the 2018 Pyeongchang Games, each performance hampered by injury.

He won the X Games in late January, and thought he might have won the Olympics, finally, after he landed a final run he thought was even better. It knocked Gerard into fourth place.

“I kind of thought gold or silver, to be honest,” McMorris said. “But I’m not going to let it get me down.”