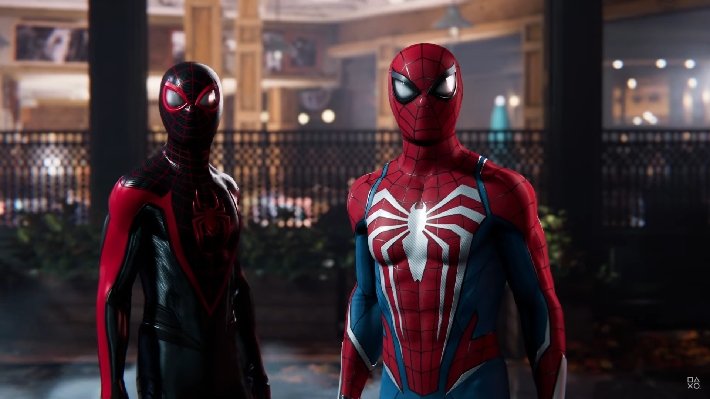 One of the best games on the PlayStation 4 is Marvel’s Spider-Man from Insomniac. It had been a long time since a superhero game was made that felt as good as that one did to play. It also nailed Peter Parker perfectly. Yuri Lowenthal, the voice of Peter, is arguably the best Peter has ever been. Then, they struck lightning again, with a truly amazing Miles Morales spin-off title. With two great games under their belt and an expected sequel on the way, everyone was asking for the same thing. We want a Spider-Man game where we can play as both Miles and Peter.

On Thursday, everyone got what they were asking for. With a quick trailer showcasing one of Peter’s gadgets, and Miles unique powers, the two heroes are faced with a new threat. Longtime Spider-Man villain, and sometimes anti-hero, Venom is shown in a dark alleyway.

(SPOILER FOR THE END OF SPIDER-MAN ON PS4 UPCOMING)

Venom being the main antagonist of this game would make sense, because anyone who finished the first game will remember the post-credits scene where Norman Osborn is speaking to his unconscious son Harry before a venom tentacle appears.

There is so much potential with this game. Hopefully, they go all-in on the ability to play as both Miles and Peter and make them both an integral part of the story. It would be a shame if they teased this only for Miles to be set off to the side while Peter got the spotlight in another game. Even if the story largely revolves around Peter, which is likely what will happen considering how the first game ended, the ability to at least play as Miles and have him involved is a necessity. His powers are incredible, the character has so much room for exploration, and we want to watch him continue growing into a superhero.

How they choose to go about making both characters playable will be the tricky part. They have options such as two separate campaigns and then a finale with both at the end, or they could have everything happening simultaneously with each character taking the reigns when the story needs it. The hardest, but most intriguing possibility, is the opportunity to play as both at the same time. Imagine for a second you’re swinging across Manhattan only to pick up information that a robbery is happening in Harlem. Instead of having to swing all the way across to the other side of town we could just switch over to the other Spider-Man and have them handle it instead.

Either way, with a 2023 release date we won’t have to wait too long for the next game. So there’s plenty to be excited about here.