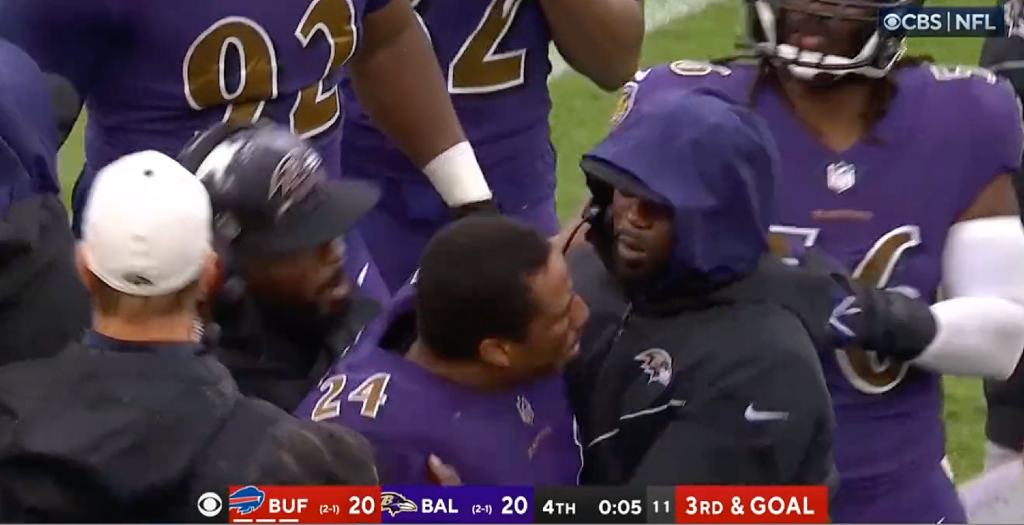 The Baltimore Ravens looked dominant in the first half against the Buffalo Bills, jumping out to a 20-3 lead at home and it appeared the marquee game of the day might end up being a rout.

However, the Ravens offense stalled in the second half, getting shutout by the Bills who followed Josh Allen’s lead to a 23-20 comeback win — the second big collapse at home for Baltimore this season. There were plenty of missed opportunities for Baltimore (and a few calls that went against them Ravens fans will point to as part of the problem), but nothing was bigger than a failed 4th and goal from the three with just over two minutes to play in a 20-20 game that resulted in an interception in the end zone.

From there, the Bills marched down the field with relative ease — somewhat confirming coach John Harbaugh’s fears in just kicking a field goal to go up three — and deep into Ravens territory. Baltimore looked confused on whether they should let the Bills score, as many players tried to let Devin Singletary run into the end zone with just under 90 seconds to play, but one Ravens defender ran over to tackle him, all but assuring the Bills could milk the clock all the way down.

After a knee on the one to wind the clock all the way to three seconds left, the Ravens sideline was in disarray, with Harbaugh getting into it with star corner Marcus Peters, who didn’t like something Harbaugh said as he walked off the field and had to be pulled away and restrained from going after his coach.

It’s not what you want to see on the sideline between your coach and a star player, but after the game Harbaugh shrugged it off as the heat of competition and said he still loves Peters — and hopes the feeling is mutual.

The Ravens dropped to 2-2 with the loss but will feel like they should be 4-0, and in what figures to be a tightly contested AFC playoff race, those two losses could prove very important when it comes time for seeding in January.