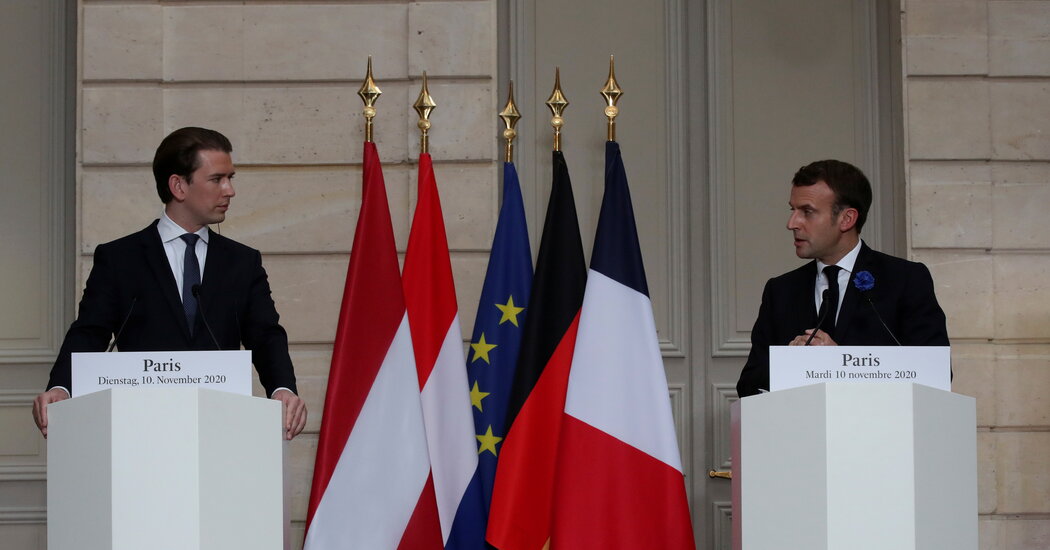 PARIS — President Emmanuel Macron of France and Chancellor Sebastian Kurz of Austria stood side by side Tuesday to talk terrorism at the Élysée Palace, but the moment was as much about domestic politics for each leader as about terrorist threats.

France and Austria both have been attacked recently: Vienna last week with the deadly shooting of four people by an Islamic State sympathizer, and France with the stabbing deaths of three in Nice and the beheading of a teacher in the Paris suburbs. And Mr. Macron in particular has been looking for allies in the face of hostility in the Muslim world to the broad crackdown his government has launched in response.

The French president, facing a re-election campaign in 2022 in which his opponent is likely to be the far right leader Marine Le Pen, has every interest in flexing his antiterrorism muscles in public, even to the point of appearing with Mr. Kurz, who until last year governed in a coalition with Ms. Le Pen’s allies on Austria’s far right.

“Given the level of emotion that has been created, he has the feeling he’s got to prove to the French he’s doing his utmost,” said Dominique Moïsi, special adviser on geopolitics at the Institut Montaigne think tank in Paris, speaking about Mr. Macron. “Even going beyond his political zone of comfort” by appearing with Mr. Kurz.

And Mr. Kurz, now in a coalition with the Greens and in a quest for broader respectability, gains from being seen in public shoulder-to-shoulder with a member in good standing of the core group of European Union leaders.

The meeting of the two leaders Tuesday was followed by a Europe-wide video conference on terrorism with Chancellor Angela Merkel of Germany, Prime Minister Mark Rutte of the Netherlands, the European Council president, Charles Michel, and the European Commission president, Ursula von der Leyen.

The meeting produced some tough talk about reinforcing borders and stepping up cross-border policing, but it was more about symbol than substance for the French and Austrian leaders, according to some who have studied the two men.

Mr. Macron’s political standing, damaged by his government’s handling of the coronavirus epidemic, is now benefiting from public outrage and nationalism in the wake of the killings. He is also seeing a lift from what French commentators and politicians have suggested is anger over undue focus by foreign observers on the country’s treatment of its Muslim population.

“Macron is clearly keeping up the momentum. Being tough on terrorism never hurt anyone,” said François Heisbourg, a French defense analyst, though “honestly I don’t think most French people have heard of Kurz.”

In the view of analysts, the political implications of Tuesday’s meeting were clear.

“In a way it’s a direct answer to Marine Le Pen,” said Mr. Moïsi of the Institut Montaigne. “He’s already in the campaign, and he’s only got one opponent. He’s proving to those who vote for her, you don’t have to vote for her, you can vote for me. It’s a political tactic in the immediate, and a global strategy in the longer term.”

Mr. Kurz had similar domestic goals in mind, aware of having to take a tough line to mobilize voters who might defect to the far-right Freedom Party, with which he governed in a previous coalition.

“For Kurz this alliance with Macron is useful in three ways,” said Christoph Hofinger, director of the SORA institute, a social research group in Vienna. “He can show that he has European recognition, he can show that he is being tough on political Islam, and the whole thing distracts from the embarrassing missed warnings ahead of the recent attack in Vienna

He added: “It is less about persuading Macron of anything than about giving the impression of being a leading voice in Europe.”

Mr. Macron was careful to touch on themes dear to Ms. Le Pen’s party, in brief remarks Tuesday after his meeting with Mr. Kurz and the other European leaders. “This menace weighs on all the countries of Europe,” he said, emphasizing to reporters that the Continent’s external border, outside the so-called Schengen Zone that encompasses most of the countries of Europe, needed to be tightened.

“Security weakness at the border is a risk to all our member states,” Mr. Macron said. “There has to be a refoundation of the Schengen Zone,” he added, “so that it becomes a safe space.”

Mr. Macron insisted that “we have to look lucidly at the link between illegal immigration and terrorism,” a nod to apparent illegal entry into Italy by boat by the suspect in the Nice killings.

Mr. Kurz chimed right in Tuesday. “We can’t live in liberty without protecting our exterior frontiers,” the Austrian chancellor said. “We’re being confronted by a permanent menace.”

Ms. Merkel was the only leader who sounded a softening note. “This is not a fight between Islam and Christianity,” the German chancellor said. “It’s about defending our model of a democratic society.”

Before Mr. Macron spoke, Ms. Le Pen’s National Rally party issued a statement Tuesday calling for the abandonment of the Schengen Zone and the re-establishment of national borders — for years a French far-right rallying cry. This would do away with a signature achievement of the European Union, border-free travel. Mr. Macron hasn’t gone that far, although last week he announced a doubling of French border guards.

Ms. Le Pen’s party professed bemusement at Mr. Macron’s remarks. “He doesn’t understand the threat we are facing,” said Philippe Olivier, a close aide to the far right leader, in an interview after Mr. Macron spoke.

“We are at war, and in the face of a war we implement a law of war,” Mr. Olivier said, adding that Mr. Macron’s pledges to rethink the Schengen area and to regulate hate speech on social networks were useless in the fight against terrorism.

Mr. Macron touched on another theme dear to the far right, the abuse of demands for asylum. “There’s been a distortion in calls for the right to asylum,” the French president said Tuesday. “We’ve seen more and more people asking for asylum. This is being used by traffickers,” he said.

Mr. Olivier said that Mr. Macron’s denunciation of the “misuse” of Europe’s asylum system was contradicted by his support for the new European Commission-backed plan for migrants, which offers countries financial incentives to take in refugees, but also aims to speed deportation.

For now, Mr. Macron can absorb these jabs from the far right, even as he lobbies, with some success, to make the problem of terrorism a European Union-wide one.

A policy document set to be approved this week by E.U. interior ministers lays out areas where the EU should step up the fight against extremism, including compelling social media companies to remove extremist content, improving existing intelligence-sharing platforms and bolstering cooperation with third countries on the movements of extremists.