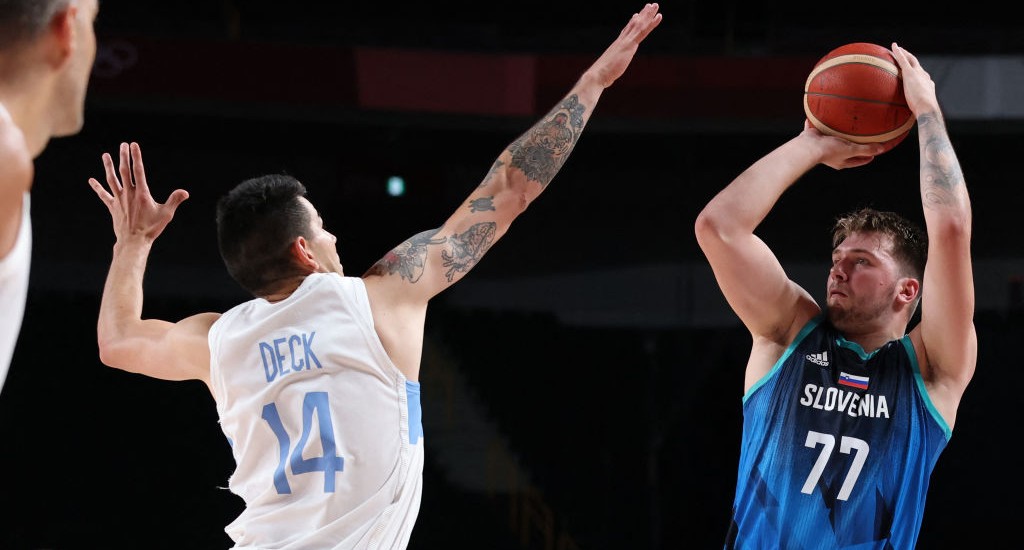 On Sunday morning, the USA men disappointed in their opening game of the Olympics, losing to France after a fourth quarter collapse as their offense failed to produce anything in the closing minutes. USA hoops recent struggles offensively have served as a reminder of how different the NBA game is from FIBA basketball, with the physicality allowed and how the lack of defensive three seconds closes the paint off more.

It’s an advantage for those who have that FIBA experience, and we saw that on full display in the wee hours of Monday morning as another NBA star, Luka Doncic, had no problems readjusting to the international game as he lit up Argentina in an historic Olympic scoring performance.

It didn’t take long for Doncic to get it going, scoring 17 in the first quarter including a few of his patented stepback threes that set the tone for what was going to be one of the most dominant individual performances in Olympics history.

In the first half, Doncic finished with 31 points and eight rebounds, as he was simply unstoppable, using his physicality to bully the Argentina guards in the post and using his quickness to get by bigger defenders any time they switched on the perimeter.

After scoring 23 pts in one quarter and a half, Luka blocks Garino, runs the floor and gives the alley-oop pass to Tobey.

We are all witnesses. pic.twitter.com/V4fJd7izMF

In the second half, Doncic started to put some extra sauce on his performance, highlighted by this outrageous behind the back bounce pass to a rolling Mike Tobey as an exclamation point on a sensational game.

Doncic finished with 48 points, 11 rebounds, and five assists on 18-of-29 shooting (6-of-14 from three), as Slovenia ran away with a 118-96 win over the fourth-ranked team in the world, announcing their presence on the Olympic stage for the first time in style. Doncic’s 48 points tied him with Eddie Palubinskas for the second most points in an Olympic basketball game (which, a reminder, are just 40 minutes long), trailing only Oscar Schmidt’s 55 points for the all-time record.

Klemen Prepelic was the secondary star of the night for Slovenia, drilling 4-of-6 from three as he supported Doncic with 22 points, lighting it up from downtown — the broadcast said he’s called the Slovenian Stephen Curry, apparently for fairly good reason. Argentina certainly didn’t have the shooting night needed to keep up with Doncic, Prepelic, and the rest of Slovenia, as they were a dismal 5-of-31 from deep and will now face an uphill battle to get out of a tough group that also includes Spain.