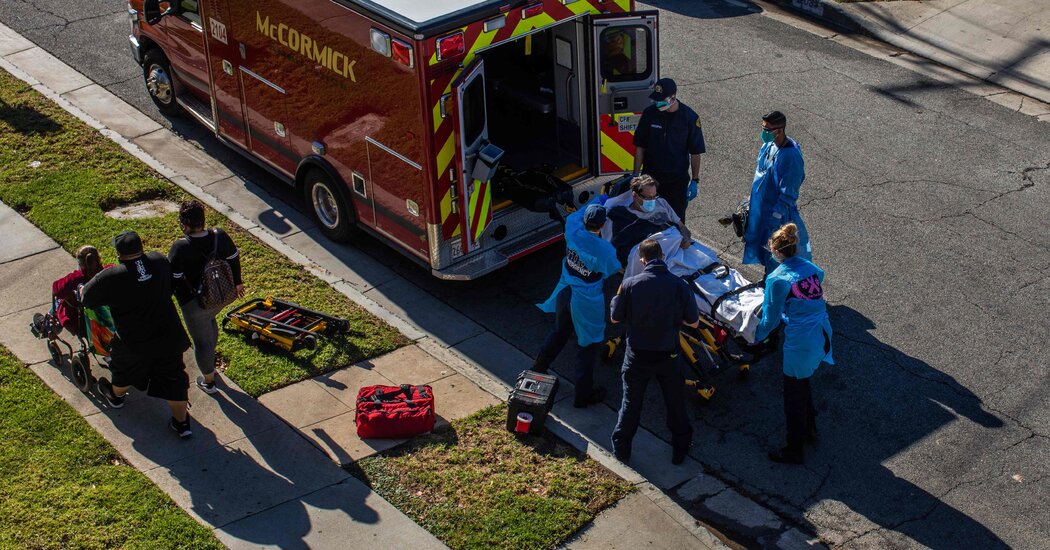 With hospitals in Los Angeles County swamped with Covid-19 patients, a memo that went out to the county’s ambulance crews last week caused public alarm and prompted explanations from medics on social media about their care practices.

In the memo, a slightly updated version of which was released on Monday, the county Emergency Medical Services Agency instructed the crews not to transport most adult patients whose hearts had stopped beating to a hospital if resuscitation in the field was unsuccessful or if the patients met established criteria for declaring death.

The measure was needed “due to the severe impact of the Covid-19 pandemic on E.M.S. and 9-1-1 receiving hospitals,” Dr. Marianne Gausche-Hill, the agency’s medical director, wrote in the directive.

What the memo actually reflected, though, was an effort to spare overburdened emergency rooms from having to spend time and resources on patients who were already beyond their help. And rather than a dire last resort, it was actually a relatively small change from the county’s previous policy, which already discouraged emergency personnel from taking most patients whose heartbeats could not be restored where they were found to the hospital.

“Although this has been in place, paramedics have been transporting some of these patients to emergency departments,” Dr. Gausche-Hill wrote in an email in response to questions about the policies. “We suggest that they don’t,” she continued, because “the emergency department would not offer any additional therapeutic interventions.”

She added that the policy allowed exceptions for cases where the scene was unsafe or when emergency crews had particular concerns that need to be discussed with a physician.

Ambulances used to regularly rush patients without a heartbeat to a hospital, a practice known as “scoop and run,” but that changed about a decade ago, according to Dr. David K. Tan, president of the National Association of E.M.S. Physicians.

These days, he said, “the standard of care is to understand that cardiac arrest is an E.M.S. problem, it’s not a hospital problem, and that a patient’s chances of survival are better to work them where you find them.”

Several medics around the country, like Kari Dickerson, a paramedic in Kentucky who tweets as @MedicTrommasher, jumped into social media to try to quell anxieties about the directive they believed were unfounded.

“The people I saw most upset were Black and brown people,” said Ms. Dickerson, who said that she had to explain to her parents that “this is stuff we already do.” She said that she read posts by people expressing fears that “medics were just going to leave people on the floor” and that “E.M.S. was the one deciding who would live and who would die, who was worthy.”

Ms. Dickerson said she was concerned that these misunderstandings could lead to anger at personnel who had to break the news that someone had died, with families wondering, “Did they do this on purpose, did they not work as hard as they would have for somebody that looks like them?”

She added, “People are already worried that there’s some hierarchy of who gets care even prior to a pandemic, and now that we’re in it, it’s even worse.”

Research shows that once E.M.S. had attempted without success to resuscitate them, patients like those described in the Los Angeles directive rarely live, even if transported to a hospital, said Dr. Jeffrey M. Goodloe, a director of the American College of Emergency Physicians.

“None of us, ever, want to withhold the chance of survival from someone that is depending upon us,” said Dr. Goodloe, who is also chief medical officer for an E.M.S. system covering Oklahoma City and Tulsa.

So for areas where hospital wards are overflowing and empty beds are scarce, he said, “the best advice we can give somebody is work to keep yourself well so you don’t need E.M.S. care, or emergency department care, or hospital based care.” He added, “Prevention is more important than ever.”