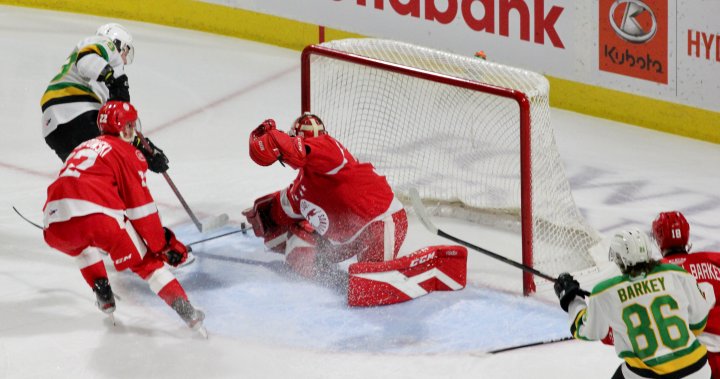 It took seven goals but the London Knights held onto first place overall in the Ontario Hockey League standings.

London defeated a relentless Soo Greyhounds squad 7-4 at Budweiser Gardens on Friday night in a game that saw the Knights build a 5-1 lead, only to have Sault Ste. Marie come back to within a goal in a span of just over three minutes spread between two periods.

The teams came into the game with the top two point totals in the OHL.

Max McCue led the way for London with two goals and an assist and Ruslan Gazizov had a trio of assists to give him seven points in his first four games with the Knights.

The game flew back and forth, featured two video reviews, hit posts and pucks pinging off crossbars in front of a crowd of a near-sold out crowd of 8,949 at Budweiser Gardens.

Brody Crane’s first goal in the Ontario Hockey League started the scoring at 6:28 of the opening period. London’s Denver Barkey flipped a backhand pass to Crane at the left post of the Greyhounds net and Crane banged through his own rebound to join John and Ryan Held as father-son duos to score for the Knights. Brody’s father Derrick played in London from 1991-93.

It appeared that the Knights had gone ahead 2-0 on a Colton Smith power play goal later in the opening frame but after a review the goal was disallowed. The announced ruling said the puck was deflected in by a high stick.

Using the old line, “if at first you don’t succeed…,” Smith made good on a power play goal early in the second for his eighth goal overall this year and that did succeed in putting London ahead 2-0 at the 45 second mark.

Max McCue set up veteran Cody Morgan to put the Knights in front by three as McCue skated into the Sault Ste. Marie zone on a partial breakaway. As he was cut off by a defender, he managed to pass the puck to a hard-charging Cody Morgan going to the net and the London overage forward scored his fourth goal of the year.

Read more:
Knights goaltender Brett Brochu back in the net intent on being even better

As a 5-on-3 London man advantage came to an end just over four minutes later, Greyhounds captain Ryan O’Rourke nabbed a puck, went in on a breakaway and scored Sault Ste. Marie’s first goal of the game to cut into the Knights lead.

It didn’t take London long to respond as Landon Sim banged in a puck to restore a three-goal advantage for the Knights at 14:07 of the second period and then London’s Max McCue picked a top corner coming in on right-wing to make it 5-1 for the Knights.

Keeping Sault Ste. Marie off the scoreboard is about as easy as keeping dirt out of your eyes in a sandstorm. The Greyhounds managed to get a goal before the second period ended. Kirill Kudryavtsev snapped in his first OHL goal with 33 seconds remaining on the clock and the teams went to the second intermission with London leading 5-2.

It took Sault Ste. Marie just over two and a half minutes to cut the Knights advantage to a single goal.

Tye Kartye converted on a power play chance and then St. Louis Blues draft pick Tanner Dickinson scored one minute and 53 seconds later and suddenly the teams were staring at a 5-4 scoreboard.

The speed of the game carried the teams quickly through the middle part of the third period as they raced back and forth but could not beat Brochu, Ivanov or the posts or crossbars.

With 3:50 to go in regulation the Knights got the puck to the Greyhounds net and Liam Gilmartin batted it in. Sault Ste. Marie challenged the play for goaltender interference but the goal stood and gave London some late breathing room that Max McCue made use of to put his second of the night into an empty net to complete the scoring.

Brochu earned his tenth win of the season and stopped 29 shots in the process.

Number 61 is number one

The Columbus Blue Jackets have announced that former London Knight forward Rick Nash will be the first Columbus player to have his number retired.

Nash wore the same number 61 with the Blue Jackets that he did with the Knights. Nash was the first-ever draft pick of the Mark and Dale Hunter era and when he joined the Knights he wanted to wear number 13.

His favourite player growing up in Brampton, Ont., had been Mats Sundin of the Toronto Maple Leafs and Sundin wore 13. At that time, Knights trainer Don Brankley did not allow any player to wear 13. “Branks” was superstitious. Nash asked for number 16 but Matt Albiani was already wearing 16 for the Knights. When Nash arrived at the London Ice House the next day, Don Brankley had a number 61 Knights sweater hanging in Nash’s stall.

Nash would be number 61 from that moment forward. Columbus will hold a ceremony on Saturday, March 5 to honour Nash. His number 61 already hangs in the rafters at Budweiser Gardens.

Paul Cotter with his first NHL goal to break the ice for the Golden Knights!#VegasBorn pic.twitter.com/bO6OnGnFbd

In just his second game in the National Hockey League, former Knight Paul Cotter scored his first NHL goal. It began the scoring for the Vegas Golden Knights in what would eventually be a 3-2 overtime victory over the Minnesota Wild.

Cotter spent most of the 2018-19 season in London after deciding to leave Western Michigan University to pursue professional hockey. He had 26 points in 48 games for the Knights. Cotter went from London to the Chicago Wolves and then the Henderson Silver Knights of the AHL and now is trying to secure a spot on the Golden Knights after they selected him in the 4th round of the 2018 NHL Entry Draft.

London is headed to Erie on Nov. 13 to face the Otters for the first time this season. Erie made a coaching change this week electing to fire Chris Hartsburg after a 3-7-1 start. Erie has named longtime associate coach B.J. Adams as their new head coach. Adams was a part of the Otters team that won an Ontario Hockey League championship in 2017.

Coverage will begin at 7 pm with the pre-game show on 980 CFPL, at www.980cfpl.ca and on the Radioplayer Canada app.