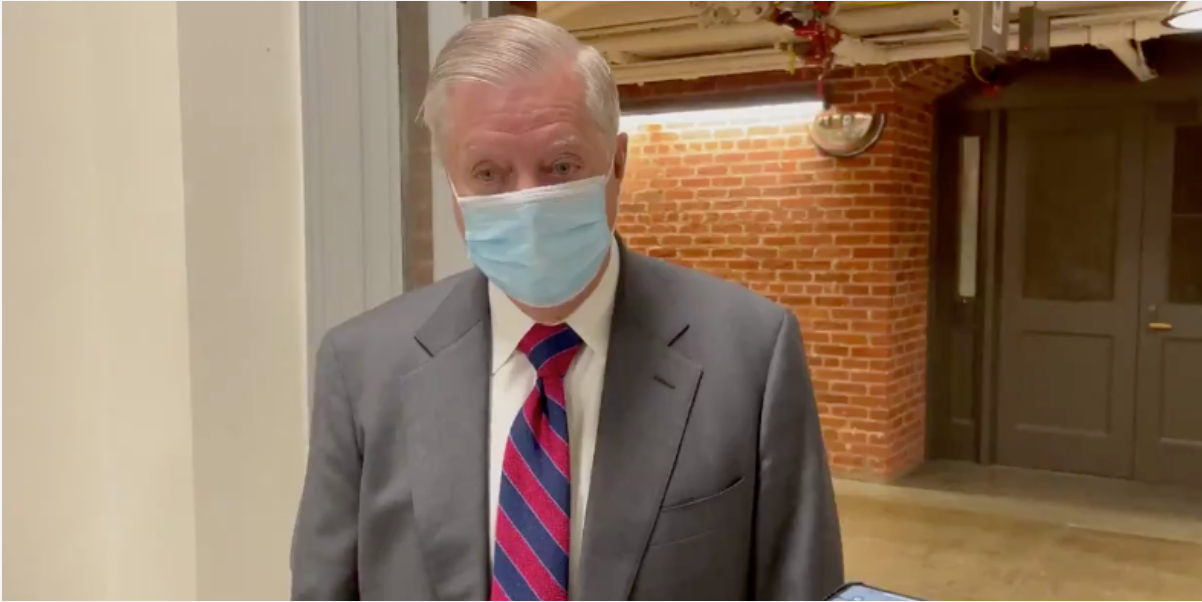 Advertisement
(R-Ga.) is “very pleasant” and that he wants to know “what the facts are” in reference to a series of controversial and conspiratorial posts and videos that have been unearthed since she was elected to Congress.

Several videos of the "QAnon Congresswoman" have resurfaced recently showing Greene's rampant conspiracy driven views prior to her being elected. One video shows Greene harassing a Parkland shooting survivor, while another shows her questioning the validity of 9/11.

On Tuesday, Graham suggested to reporters that he wanted to see whether or not the posts in particular had been manipulated. He also said he was not aware of the numerous videos that have come up.

"I rode down with her going to Georgia and had a very pleasant experience. Are these postings accurate? I want to hear from her. Before I judge what to do about her, I want to know what the facts are," Graham said. "If these are not accurate postings—they've been manipulated—I'd like to know that. If they are accurate, do you still hold these beliefs? I'm going to wait for her to come forward and tell us exactly what's real and what's not and what she believes."

In a video posted on Twitter of Graham's response, a reporter cuts in by noting that Greene is "on video saying some of this stuff."

Graham responds by saying "she’ll have to tell me is it accurate? I don't know, I haven’t seen the videos. What’s accurate, what’s not? What position do you have today? And if your position is different today, why?"

While Graham insists he hasn't seen any of the numerous videos, they have been highlighted at a dizzying pace recently along with old posts on social media.

One video shows Greene pestering David Hogg, a Parkland shooting survivor, calling him a "coward" and accusing him of using "George Soros funding."

"[email protected], is this you harassing @davidhogg111 weeks after the Parkland shooting, that my daughter was killed in & he was in? Calling him a coward for ignoring your insanity. I will answer all of your questions in person. Get ready to record again," Fred Guttenberg, a parent of a Parkland victim, wrote on Twitter last week.

Many far-right conspiracy theorists claim school shootings are inside jobs, including the Sandy Hook shooting.

"I've got a question for you. How do you get avid gun owners, and people who support the Second Amendment, to give up their guns and go along with anti-gun legislation? How do you do that?" Greene says.

But, if that was not enough for Graham, than perhaps a post from Greene's social media could convince him.

In the post, Greene says the 2018 California wildfires were ignited by space "lasers" perpetrated by energy executives, all of whom were Jewish. It was a lie that circled the QAnon corners of the internet that ended up on Greene's Facebook account.

It looks like Greene is attempting to a clean of up all of her conspiratorial content now that she has been sworn in as a member of Congress. Facebook posts from 2018 and 2019 have been removed, according to CNN. She told the news outlet that she has had "teams of people" manage her social media pages and that "some" likes and shares "did not represent my views."

Perhaps, once Graham has a moment to review the evidence, he may have a change of heart.

Libby Cohen is a third-year University of Texas student originally from New Jersey. She has written for ORANGE Magazine, the Daily Texan, and most recently interned for 1010 WINS in NYC. She’s now back in Austin writing for the Texas Standard and the Daily Dot.