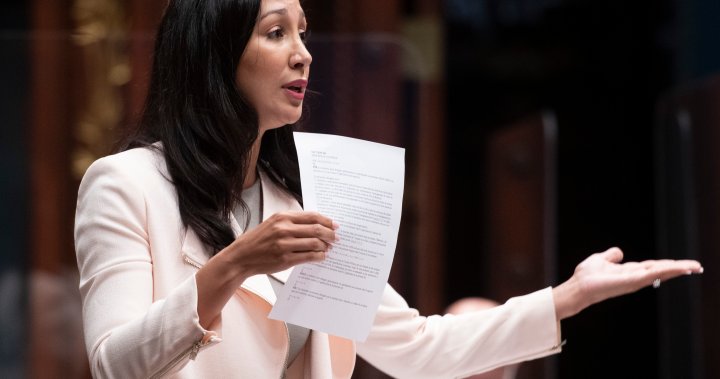 Liberal MNA Marwah Rizqy is demanding a full independent investigation into what happened at École Secondaire Saint-Laurent (ESSL) after three basketball coaches were arrested in February.

The three men were accused of sex crimes involving students. Teachers and parents from the school say they are discouraged with the progress so far, and the climate at the school is not good.

On Wednesday, Rizqy gave an emotional speech criticizing the government for its handling of the investigation.

“I tried many times. I sent emails to Jean-François Roberge asking him, ‘you need to put in place a real investigation with an independent firm,’” she said of efforts to communicate with the education minister.

Coaches Charles-Xavier Boislard, Daniel Lacasse and Robert Luu were arrested in February for alleged sex crimes involving at least two minors that took place between 2008 and 2017.

The three men face a total of eight charges between them. Days after the arrests, the Centre de Service Scolaire Marguerite Bourgeois announced it was opening an investigation, while Education Minister Jean-François Roberge launched a government inquiry the next day.

Shortly after that, another investigation was announced into how Basketball Québec handled the situation.

According to Rizqy, parents and staff members from ESSL have been emailing her saying not only has no one been able to get in touch with the lead investigator, the overwhelming majority of them don’t even know who it is.

“It’s been two months since the arrests and since that, no one knows who the investigator is in charge,” says Rizqy. “It was a teacher who made so many calls and finally found out who was the investigator.”

Rizqy said according to that teacher, the lead investigator, Philippe Côté, won’t even talk to the teachers before he speaks with the principal.

She is now demanding a new independent external investigation conducted by a firm with experience dealing with sexual assault, psychological trauma and harassment.

“I want them to make a full investigation not only regarding what happened in the basketball program but what happened also in school,” says Rizqy. “Which principal knew and which one did nothing.”

During question period on Wednesday at the National Assembly, Roberge says he’s surprised and disappointed that information concerning the investigation has not been transmitted well. He promised better communication with parents and staff going forward.

A full report is expected in June.