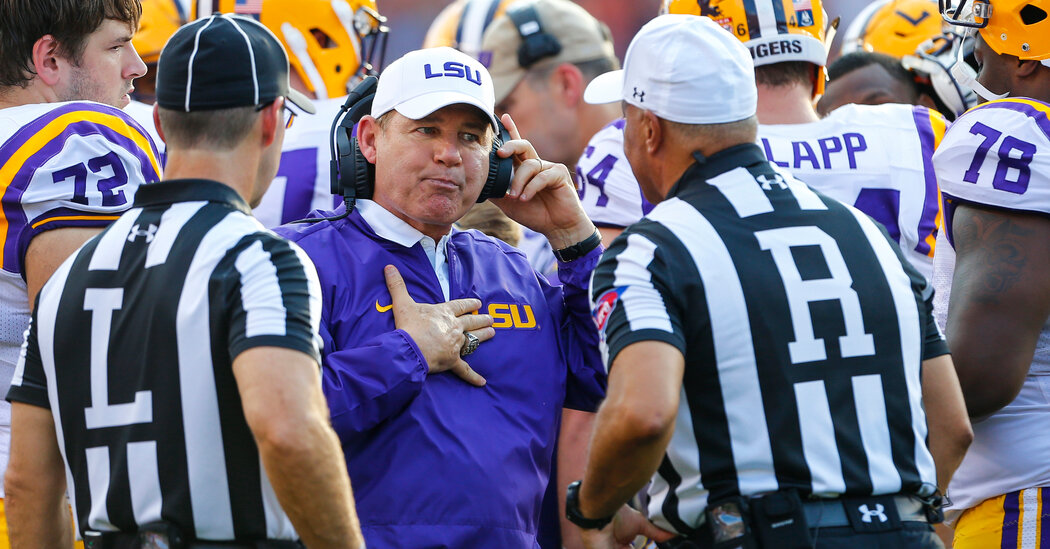 The University of Kansas said Monday that it had “agreed to part ways” with its football coach, Les Miles, after the release of a 2013 report that detailed accusations that Miles had sexually harassed female student workers when he was at Louisiana State University.

Kansas had refrained from offering public support for Miles after the report emerged through litigation last Thursday. But the publication on Friday of the findings of a new investigation, one that examined the broader culture of L.S.U. around matters of sexual misconduct, placed his future at Kansas into even greater doubt.

Kansas said Friday night that Miles had been put on administrative leave, and on Monday night, the university announced that Miles’s tenure, which began with his hiring in November 2018, had ended.

“I am extremely disappointed for our university, fans and everyone involved with our football program,” Jeff Long, the athletic director, said in a statement. “There is a lot of young talent on this football team, and I have no doubt we will identify the right individual to lead this program.”

In a statement released by the university, Miles said it was “certainly a difficult day for me and for my family.” He did not address his history at L.S.U.

But Miles’s lawyer has denied the coach acted improperly and said that he had “learned an unfortunate lesson eight years ago: His naturally open and trusting nature exposes him to false claims by people with a different agenda than his.” After Miles’s leave was announced last week, the lawyer, Peter Ginsberg, complained that Kansas had acted because of “media blowback” and said that the decision was “both disturbing and unfair.”

Ginsberg also asserted that Kansas had received “significant information” before the release of the 2013 report. Asked whether he would share what Miles and others had provided Kansas, Ginsberg did not respond.

During his two seasons at Kansas, Miles never neared the levels of success he had as the football coach at Oklahoma State University and at L.S.U., where he won a national championship to end the 2007 season. Miles posted a 3-18 record at Kansas — after going 142-55 in his first two head coaching jobs.

Until recently, though, Miles’s job did not appear to be in imminent peril. But as L.S.U. faced accusations that it had mishandled allegations of sexual misconduct, USA Today sued for a copy of a 2013 investigative report by a law firm with close ties to the university.

The report, prompted after two women who worked for the football program complained about Miles’s conduct, said that the coach had played a role in hiring decisions and that he had “made it clear that he wanted these employees to have a certain ‘look’ (attractive, blond, fit).”

Investigators were skeptical of the complaints in one account. But the second woman who came forward with misgivings told a deeply unsettling story about how Miles had begun sending her messages after she started work with the football program, and how the powerful coach had pressed her to deploy an alias and add her phone number to his personal cellphone.

She also said that she and Miles had met off campus, that the coach had suggested they retreat to a hotel or his condominium and that he had kissed her twice. Other allegations in the report were redacted.

Although L.S.U.’s lawyers felt in 2013 that Miles’s conduct did not justify his firing — and he had just received a contract extension with a raise to $4.3 million a year — others inside the university were deeply alarmed.

The new investigation that was completed on Friday showed that Joe Alleva, who was the athletic director at L.S.U. in 2013 and had already warned his coach against meeting one-on-one with student employees, believed Miles should be ousted for cause.

“I always believe that people are innocent until proven guilty and in this case I believe he is guilty of insubordination, inappropriate behavior, putting the university, athletic dept and football program at great risk,” Alleva wrote to other L.S.U. officials in June 2013. “I think we have cause.”

Alleva’s recommendation was not heeded. Instead, L.S.U. elected only to bar Miles from hiring student workers in athletics for “personal work.” The university also said Miles was forbidden from having personal communications with any student employee in athletics, and it ordered him to pay for at least eight hours of training with an employment lawyer.

At the same time, L.S.U. maneuvered to shield the allegations and punishments from public view.

“There was no file of this matter at the university,” the investigation that L.S.U. published on Friday said of the 2013 inquiry. “Instead, the report regarding the investigation was intentionally stored offsite at L.S.U.’s outside counsel’s office and with Miles’ attorneys.”

Indeed, Kansas said it had not reviewed the report until it came out during the litigation this month in Louisiana.

L.S.U. fired Miles in 2016, but his dismissal then was connected to the 2-2 start for the Tigers that season. His tenure in Baton Rouge, which began in 2005, had often been praised: In addition to winning the 2007 season’s title, he led L.S.U. to another championship game after the 2011 season. He routinely kept L.S.U. competitive with the increasingly dynastic University of Alabama and was popular among many fans, even after his firing.