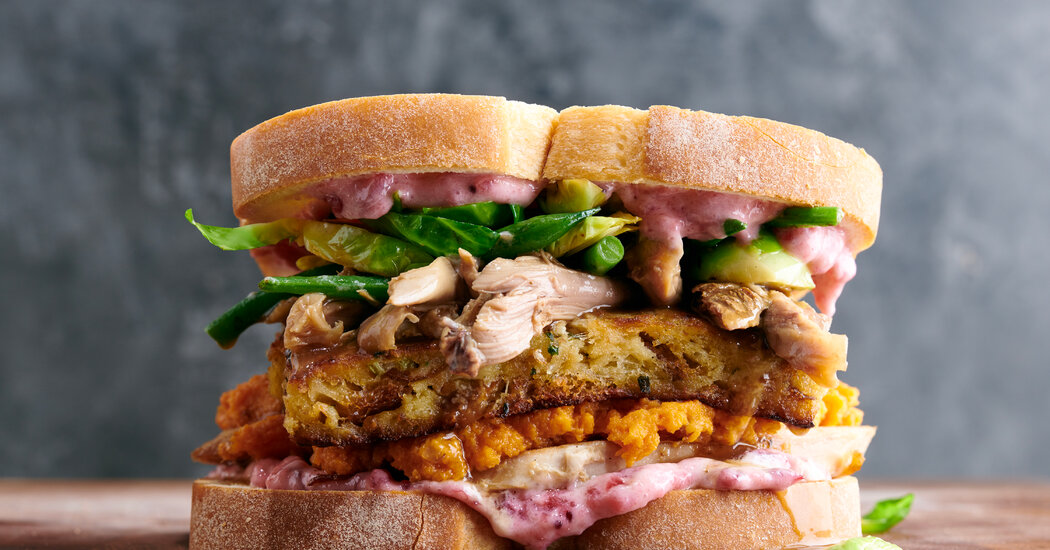 Good morning. This is where Thanksgiving gets great: a bespoke leftovers sandwich (above) eaten in the quiet of a house that was recently crowded and noisy, maybe with a glass of whole milk or one of kombucha, depending on your point of view, or with a glass of chilled Beaujolais or icy lager, depending on the time of day. Welcome to Christmas music season!

Another option: the Elena Ruz, a sweet-and-savory sandwich named for the Cuban socialite who loved it so: soft medianoche bread, turkey, softened cream cheese and strawberry preserves. Christina Morales traced its history in The Times this week.

Mostly, I’m looking forward to having the turkey stripped bare, so I can roast the bones and make a glorious stock that will serve as the beating heart of a no-recipe recipe for turkey bone gumbo that I learned from the excellent New Orleans raconteur Pableaux Johnson.

You’ll need, in addition to the stock, a pound or so of smoked sausage — Andouille is the traditional choice but kielbasa is excellent, too — along with the Southern Louisiana “holy trinity” of onions, celery and bell pepper. Pick up some scallions as well, and some white rice over which to serve the stew.

Start by dicing a couple of fairly large onions, along with two diced bell peppers and three diced sticks of celery. Then make a roux: Whisk a cup of all-purpose flour into a cup of hot canola oil at the bottom of a heavy Dutch oven set over medium heat, and stir it for 15 or 20 minutes, until it is a peanut-buttery shade of brown. Add the vegetables to the mixture along with a healthy pinch of ground cayenne or a few dashes of hot sauce. Keep stirring until the base goes mahogany dark and the onions are clear.

Add half of the smoked sausage, diced. Stir again and then hit the mixture, slowly, with around three quarts of your turkey broth. Stir to combine, allow the gumbo to come to a simmer, then lower the heat and cook for 45 minutes, partially covered. Uncover the pot, add the rest of the sausage (and any remaining turkey you have lying around), and continue cooking, stirring occasionally, for an additional 30 minutes. Is it too thick? Add more stock.

Now season to taste, adding more spice or a splash of Worcestershire sauce. Garnish with chopped scallions and serve over steamed white rice. That’s a righteous meal for eight people, maybe especially so if you make it on one day and serve it on another, allowing the flavors to meld. Give thanks to Pableaux for his work making it part of our Thanksgiving tapestry.

As for the rest of the weekend, don’t forget that Hanukkah starts on Sunday evening. We’ve got loads and loads of recipes for that — along with further advice about allowing some of your dishes to “cure.” As good as a classic beef brisket with caramelized onions is on the evening it’s made, it’s about 40 percent better the following night.

Thousands and thousands more recipes await you on New York Times Cooking, though you do need a subscription to access them. I hope you have one! Subscriptions support our work. (They’re also great holiday gifts.) And please reach out if you run into trouble with a recipe or our technology: [email protected].

Now, it’s nothing to do with the pleasures of boxty or a dry rye manhattan, but I loved Alexandra Jacobs’s review of Edith Schloss’s “The Loft Generation,” in The Times. “If nostalgia is a sixth and often fogging sense, it is absent in a book that feels manifestly present, clear and alive even while describing the past.”

Finally, in bluegrass news, here’s a new single from The Del McCoury Band: “Running Wild.” See you on Sunday.