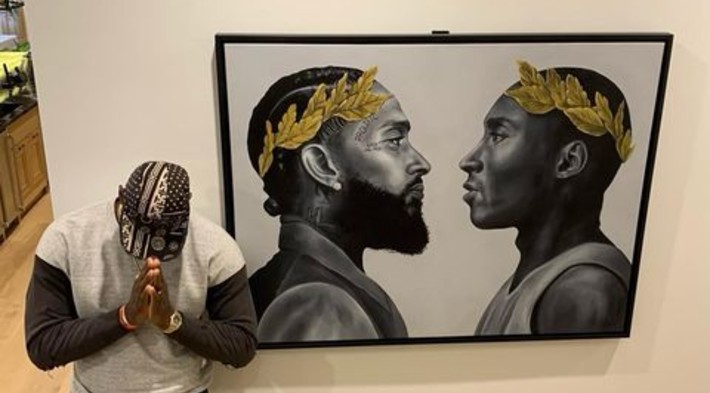 In 2020, Los Angeles saw two of its icons, one from sports and one from music, taken away far too young as the deaths of Kobe Bryant and Nipsey Hussle shook the city and beyond. For many, those two were inspirations, not just for what they did as an athlete and artist but for the work they put in to get there and how they shared their gifts with the community.

LeBron James, like many in the NBA, was hit hard by both losses, and he’s been vocal about the influence of both men on him. Bryant and LeBron were competitors first and later friends, with James taking the mantle as the Lakers top star and leaned on Bryant for guidance, while Hussle’s work as an artist and activist had lasting impacts on James as well. On Wednesday night, James posted to Instagram to show off a new painting in his house of Kobe and Nipsey, saying they’ll be “wit me every single day when walking my hallways.”

It’s a pretty tremendous piece, done by Lindsay Dawn Studios, and it’s clear how much James was impacted by both men, wanting to make sure to carry on their legacies as he embarks on his own journey to becoming an L.A. legend himself.