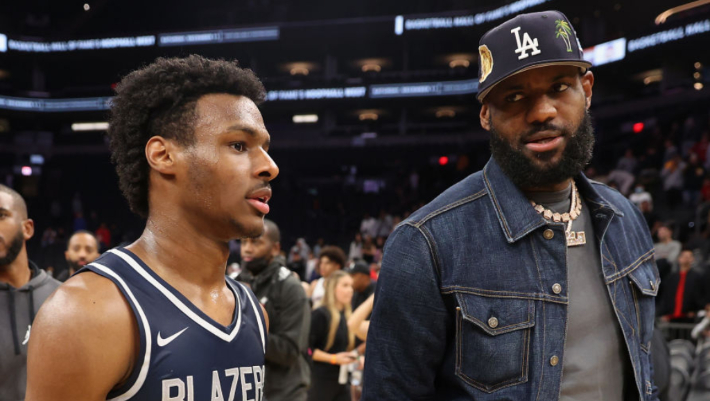 The eyes of the college football world are on Columbus, Ohio on Saturday night. That’s because the No. 2 Ohio State Buckeyes are welcoming another top-5 team into their building, as the fifth-ranked Notre Dame Fighting Irish made the trip from South Bend for a Week 1 showdown with major College Football Playoff implications.

The game has generated a whole lot of buzz, and not just because of the two teams that are playing. In fact, Ohio State basketball is getting a bit of publicity on Saturday, too, as 4-star 2023 prospect Bronny James has made the trip from southern California to Ohio’s capital on an unofficial visit. It is the first visit that Bronny has taken as he begins to sort out what his next step will be after his career at Sierra Canyon comes to an end next year.

Bronny isn’t the only person named LeBron James in attendance. His old man, a well-documented Buckeye fan, made the trip with him, and the pair were spotted on the sideline before the game with LeBron decked out in an OSU hockey jersey.

As it turns out, people like going to big college football games when they are on campuses, who knew?