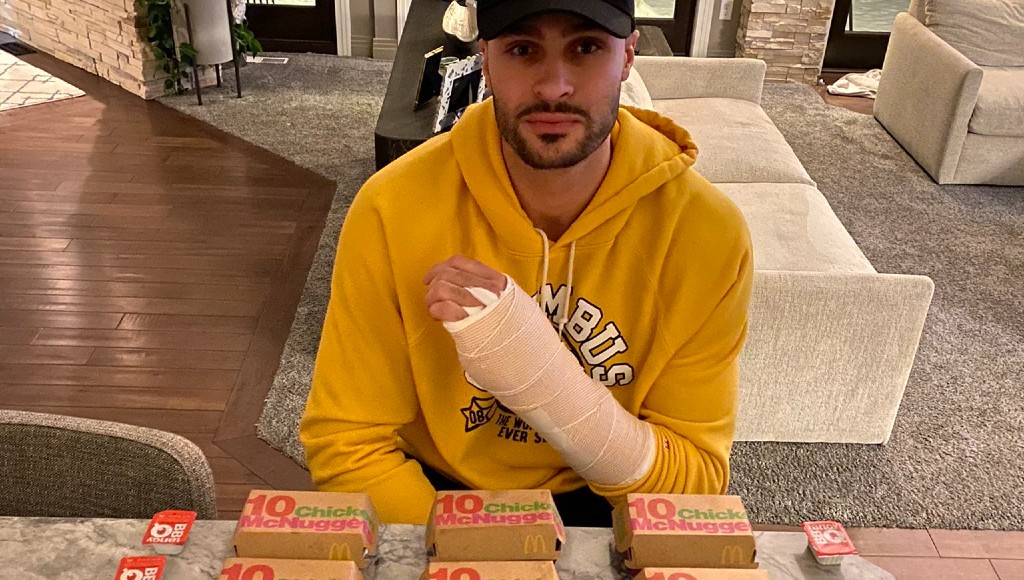 NBA fans on the internet are a strange bunch, and one of the best examples of this is in Cleveland where the “Me vs. Nuggets” challenge has become an annual tradition whenever the Cavs face the Denver Nuggets. The premise is simple and can be traced back to @WayneEmbrysKids, who started it a decade ago, as they try to eat a chicken nugget for every point Denver scores in the game. This can be disastrous, as Cleveland’s defense isn’t always the best and Denver, especially recently, has been a very good offensive team.

What started as one guy’s mission grew into an actual thing that the team itself has acknowledged, and on Wednesday, it gained its biggest mainstream moment when Larry Nance Jr., who is out with a wrist injury, decided to join the fun.

As tip-time approached, Nance proudly showed his spread of 120 Chicken McNuggets to the delight of Cavs fans everywhere.

However, things quickly got out of hand as Denver started piling up the points, scoring 64 in the first half.

As Denver neared the century mark in the third quarter, Nance Jr. recognized it was time to jump ship and tapped out, nearly 100 nuggets into the night.

As someone who has done an ill-advised chicken nugget challenge of his own on a Chick-fil-A all-you-can-eat night, I am well aware of the feeling Nance has right now. There’s the physical pain of all those chicken nuggets lurking in the pit of your stomach, but also the emotional distress and regret of knowing you have no one to blame but yourself. Add in watching your team get smacked, as happened on Wednesday, and this has to be a real low point of poor Larry’s NBA career.

Still, it was a valiant effort, and no one can blame the man for tapping. Hell, he would’ve run out of nuggets by the mid-fourth anyways had he continued since he only had 120 to start. For anyone else still fighting the good fight in #MeVsNuggets, godspeed to you and your facilities at home.