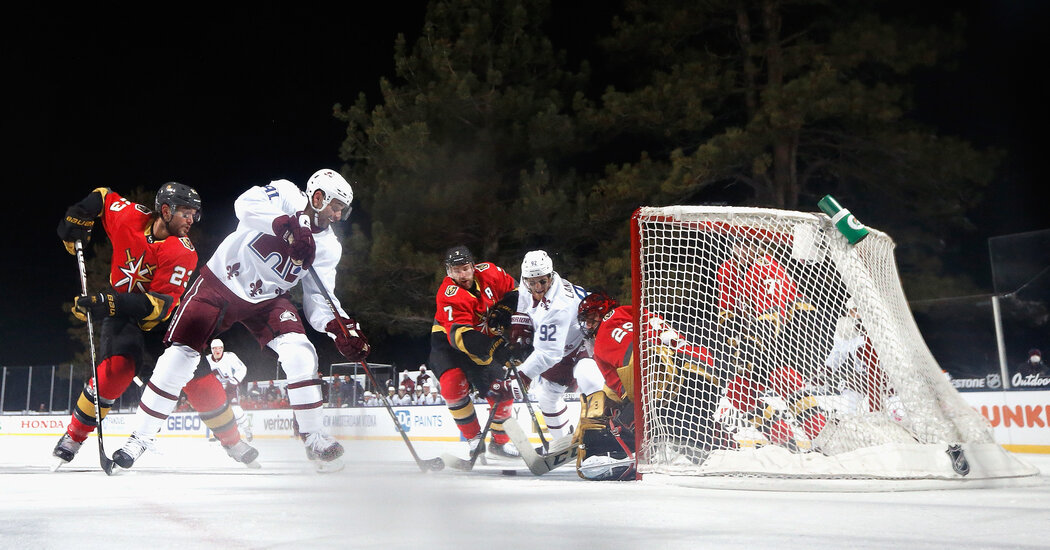 STATELINE, Nev. — The N.H.L. set out for a grand outdoor spectacle at Lake Tahoe. But after one period of Saturday’s game between the Colorado Avalanche and the Vegas Golden Knights, the venture became a bid for longest intermission: The remainder of the game had to be played under lights instead of in daylight, and it spilled into Sunday in much of North America.

The idea behind N.H.L. Outdoors, two regular-season games on a rink at the 18th hole of a golf course and without fans, was to create a picturesque precedent for national television, with a splendorous blend of snow, sun, water, mountains and trees as an organic backdrop.

Instead, the deciding moments of the game unfolded after midnight Eastern time after the game was postponed because of excessive sunlight and poor ice conditions. The delay was 8 hours 8 minutes, and the game ended at 1:50 a.m. Eastern time, more than 10½ hours after it began.

“We’ve done over 30 games, and we’ve never had a problem quite like this,” Gary Bettman, the N.H.L. commissioner, said. “We’ve played in some rain, we’ve played in snow, but sunshine has always been our enemy.”

Colorado prevailed, 3-2, with center Nathan MacKinnon setting up two goals, generating multiple scoring chances and scoring the go-ahead goal in the second period. He burst through three zones and ripped a wrist shot to the far side, a precise strike from a difficult angle that entered the net at the intersection of the post and crossbar.

“It was weird,” MacKinnon said of the day. “It feels like a blur, honestly. The ice was bad, but we never even thought of stopping. I didn’t realize that was a possibility.”

Colorado defenseman Samuel Girard, freshly off the N.H.L. Covid-19 protocol-related absence list, scored the only goal in the first period.

But there were no shortages of stumbles and tumbles from players and officials, validating concerns about the sun’s effect on the integrity of the ice surface.

“It was a unique one and a game that people will remember for a long time, I’m sure,” said Colorado captain Gabriel Landeskog, who had just returned after a 14-day quarantine. “Maybe not because of the hockey game, maybe because of everybody falling in the first period this morning. Nonetheless, it was a great experience and hopefully the fans that were able to stay up for this game were able to see how special of a place this is.”

After the stoppage, the game’s next goal, by Vegas defenseman Alec Martinez, was scored nine hours later.

“It was beautiful this afternoon and obviously still is now, you just can’t see it as well,” said Martinez, who also said “chunks” of ice melting away made the game unsafe in the daytime.

In the evening, the playing surface was smoother, more even and played faster. MacKinnon said the nighttime action was much more “enjoyable,” though he lamented not being able to complete the game amid the afternoon serenity of sunshine, a glistening lake and snowcapped mountains.

“The ice tonight was phenomenal,” said Vegas forward Alex Tuch, who scored a third-period goal. “It was like skating on the outdoor rink as a kid. The ice was like glass.”

The weekend’s second outdoor game had its start time moved twice as forecasts showed a lack of cloud cover. The Boston Bruins (10-3-2) and the Philadelphia Flyers (8-3-3), who entered Sunday as the top two teams in the East Division, were expected to play at 7:30 p.m. Sunday instead of in the afternoon. The Flyers were without Claude Giroux, their captain, and five other significant players because of coronavirus-protocol-related absences.

The Devils’ game against the Capitals in Washington, an indoors matchup, was rescheduled from Sunday evening to Sunday afternoon, giving NBC an afternoon game to broadcast after the second outdoor game’s postponement.

Like the Avalanche’s home in Denver, Lake Tahoe is known for having sun for most of the year, despite its elevation, robust snowfall and reputation for winter sports. The original forecast made the game seem feasible, but temperatures, precipitation and winds have all been volatile in recent days. It snowed early Saturday, only to give way to a bright afternoon.

Before the game, the league announced a series of contingency plans. They included a stipulation that the game would be official after two periods, meaning if play were stopped after the 40-minute mark the leading team would be the winner. An even score would result in a tie, which would be the first in the league since 2003-4, the last season before shootouts were introduced. If Saturday’s game had gone to a shootout that was interrupted by weather, it would have taken place on Monday at Ball Arena, the Avalanche’s home rink, before the two teams’ next meeting.

Outdoor games have become significant events to the N.H.L. in terms of prestige and revenue, never more so than in 2014 when six outdoor games drew a combined 376,837 fans. Of the 30 previous outdoor regular-season games, none had been delayed after starting, but a few had their start times changed to obviate such issues.