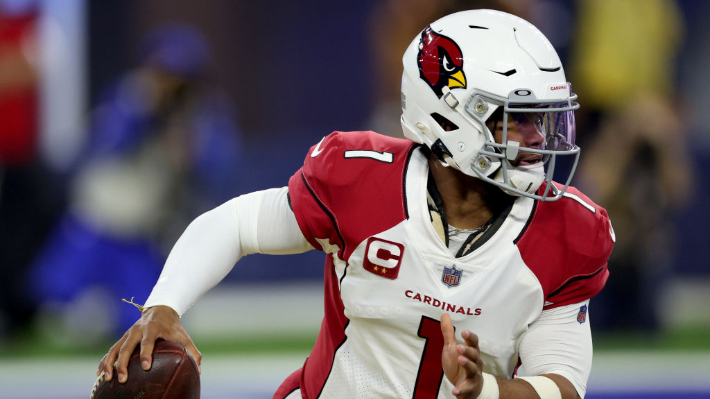 Kyler Murray and the Arizona Cardinals agreed to a contract extension that will pay the team’s franchise quarterback up to $230.5 million over the life of the deal. While the amount of money headed Murray’s way turned heads, one particular clause in the contract attracted a whole lot of attention earlier this week.

Ian Rapoport of NFL Network brought word that Murray is required to do four hours of what is defined as “independent study” every week during the season, save for the team’s bye. It led to questions about why the Cardinals felt the need to include that, with questions popping up about Murray’s work ethic and desire to study film away from the team.

Unsurprisingly, this did not sit especially well with Murray, who decided to meet with the media on Thursday afternoon to respond to some of the “disrespectful” things that have been said about himself and the clause.

Kyler Murray stepped up to the mic because he had something to say… this is what leaders do.

Murray making a surprise media appearance to push back on the talk that he doesn’t study and the homework clause in his contract. @12SportsAZ

“To think that I can accomplish everything that I’ve accomplished in my career and not be a student of the game and not have that passion, not take this serious, it’s disrespectful and it’s almost a joke,” Murray said.

While Murray said he’s “flattered” that a player of his size can go out and do what he’s done in his career at his size, he stressed that he believes it’s disrespectful to other players to imply that because the league is just too difficult. Murray then made it a point to list off the things he has achieved in his career dating back to his high school days.

“I’m not 6’7, 230, I don’t throw the ball 85 yards,” Murray said. “I’m already behind the 8 ball and I can’t afford to take any shortcuts, no pun intended. Those things, you can’t accomplish if you don’t take the game serious, if you don’t prepare the right way. Like I said, it’s laughable.”

Murray then mentioned that there are different ways to watch film and that he enjoys doing it with other members of the Cardinals’ QB room.

“I refuse to let my work ethic, my preparation be in question,” Murray said. “I’ve put in incomprehensible amounts of time and blood, sweat, tears, and work into what I do, whether it’s football or baseball. People can’t even comprehend the amount of time that it takes to do two sports at a high level in college, let alone be the first person to do it, ever, at my size? Like I said, it’s funny, but to those of you out there that believe I’d be standing there today, in front of y’all, without having a work ethic and without preparing, I’m honored that you think that, but it doesn’t exist. It’s not possible.”