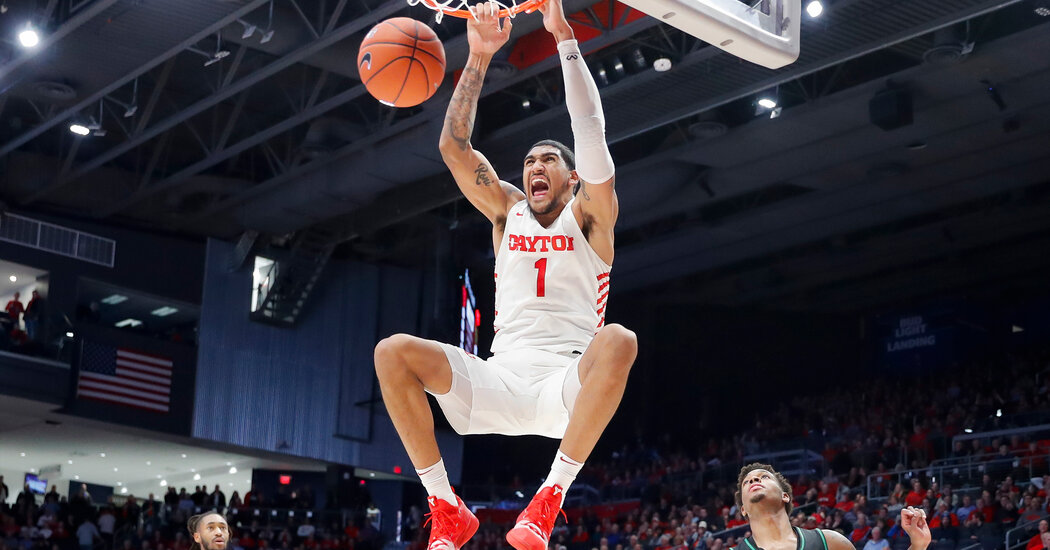 Obi Toppin’s fairy-tale path from a skinny high school tweener without a single offer from a four-year college to an N.B.A. lottery pick began with a promise. He made it four years ago to Rodrick Harrison, the basketball coach at Mount Zion Prep near Washington.

It came after the disappointment of Toppin’s senior year at Ossining High School in Westchester County, N.Y., when, according to Harrison, Toppin did not get even get a scholarship offer from a Division II college. Toppin did have one option at a junior college, until a mutual friend suggested that Toppin deserved the chance at a year playing for Harrison at Mt. Zion in Lanham, Md.

Harrison watched one game at Ossining and instantly fell in love with Toppin’s ability and hard work. Later that day, the two spoke on the phone.

“He told me, ‘Coach, if you give me an opportunity, I promise I won’t fail,’ ” Harrison recalled during a telephone interview Thursday. “ ‘I’ll work as hard as a I can. I will do whatever you need me to do.’ That’s when it clicked for me. When someone is that humble and they have that much talent, it’s like he’s a blank canvas.”

Toppin made the most of his one year at Mt. Zion, parlaying it into an offer from the University of Dayton in Ohio, where he played two seasons, averaged 20 points per game in his final year, and then was drafted by his hometown Knicks with the No. 8 overall pick in the N.B.A. draft Wednesday night.

The Knicks also are expected to acquire Immanuel Quickley, a top shooting guard out of the University of Kentucky who was selected with the 25th pick by the Oklahoma City Thunder.

It was an unusual draft, held remotely because of the pandemic, and several players were overwhelmed on the occasion, including Toppin. He broke down in tears when he was interviewed on ESPN, both because he was returning to New York — he grew up in Brooklyn — and because he had emerged from almost total obscurity to become a top-10 pick.

“Hearing my name called is a blessing,” he told reporters. “A lot of people dream of this, and there’s only 60 picks, and I was one of those picks.”

When Toppin first walked through the doors at Mt. Zion, he stood 6-foot-5, weighed about 185 pounds and had trouble getting the attention of the best A.A.U. teams in his area. Today he is 6-foot-9, weighs 220 pounds and is the holder of the 2020 John R. Wooden Award for college player of the year after he led the Flyers to a 29-2 record last season.

He shoots from long range and midrange, and slashes to the rim, and he is known to electrify audiences with his innovative and acrobatic dunks.

“I don’t rank his dunks,” said Anthony Grant, the head coach at Dayton, “but he will definitely excite a crowd with his explosiveness, variety and showmanship. He’s fun to watch; must-see TV.”

Toppin tried to showcase his talent for years when few were watching, so when he does get the opportunity, he does not squander it. At Mt. Zion, when he had begun the process of stretching another four inches in height and blossoming into a remarkable player, he finally began to draw the attention of colleges around the country. A group of coaches from state universities like Minnesota and Wyoming came to watch him practice one day in February 2017. But Toppin had injured the thumb on his shooting hand during a tournament the day before. Harrison told all the disappointed coaches not to expect much.

Toppin practiced anyway and put on a show by shooting left-handed. Harrison said he went 6 for 8, all with his off hand.

“That’s unheard-of, right there,” Harrison said. “I was like, ‘Why didn’t you tell me you can shoot with your left hand, Obi?’ But he wasn’t afraid to do it.”

By April of that year, Toppin was still available, and that is when Grant persuaded him to go to Dayton.

Grant recalled a game last year at St. Louis, when Toppin had a poor first-half performance. The visitors’ bench was right next to the student section and the students were riding Toppin hard as the Billikens took a 13-point lead midway through the second half.

But Toppin was fueled by the taunts. During a timeout, he emphatically told his teammates that they would not lose the game. He scored 8 points in the final four minutes of regulation to help force overtime, and Dayton won. But it was more than just the points: His demeanor and confidence permeated the entire team.

“The things he did to get us to overtime and then win the game,” Grant said, “and to be able to handle what was coming at him, that really impressed me.

Toppin said he modeled his game after Anthony Davis, the multi-tooled center for the Los Angeles Lakers, but acknowledged that he has a long way to go before he can match Davis as a defensive stalwart.

Defense is indeed the one aspect of Toppin’s game that needs work, but he will be tutored by the Knicks’ Tom Thibodeau, one of the best defensive coaches in the N.B.A. A lot of defense is about hard work and commitment, and Grant said that when Toppin was at Dayton, he was always eager to learn and quick to figure things out.

“I don’t see Obi being the defensive player of the year in the league,” Grant said. “But I also think he can be a great player and an asset. He’ll be everything that he’ll need to be to help the Knicks be successful. I still think he hasn’t scratched the surface.”