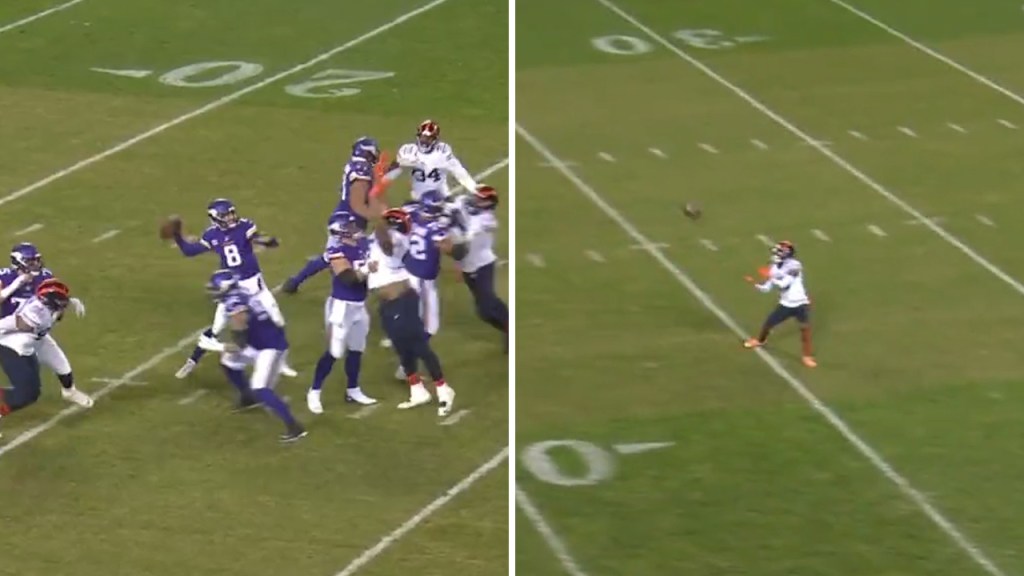 Monday night’s matchup between the Minnesota Vikings and the Chicago Bears went fairly well for the Vikings in the first half. Minnesota took a 10-3 lead into halftime and, given that the Vikings were on the road, a seven-point edge is nothing to sneeze at in a divisional game. From there, the half’s only touchdown came from the arm of Kirk Cousins, and the veteran quarterback had a few nice moments in the first 30 minutes.

However, Cousins uncorked perhaps the most memorable play from the first half and it came with an epic “arm punt” in the final minute before the break.

It was relatively unclear as to who this pass was even targeting but, as you can see, it had the look on television of a punt returner standing under a pop-up. Perhaps the throw was intended for Justin Jefferson, who got tripped up and possibly held on a no-call as he tried to run up the seam, as many of Cousins’ attempts are, but the dots don’t really paint an encouraging picture of what transpired.

The damage was relatively minimal here, as the Bears did not score before halftime, as their field goal attempt following this got blocked, and the 10-3 margin was secure. However, it is possible that the Vikings left at least three points on the board if the third down was converted and, well, Cousins might be razzed by teammates in the film room later this week.