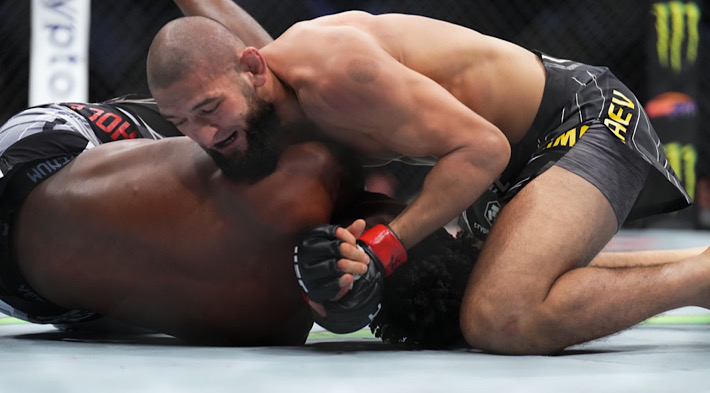 Khamzat Chimaev (12-0) kept his record unblemished with a first-round submission of Kevin Holland (23-8) in the co-main event of UFC 279 in Las Vegas.

Chimaev opened the fight with a quick shoot takedown right out of the gate and refused to allow Holland any movement around the Octagon. As Holland tried to slip out of Chimaev’s grasps on the ground, he was simply overwhelmed with Chimaev locking in a d’arce chokehold for the tap out.

Chimaev was supposed to face the legendary Nate Diaz in the main event of UFC 279, but was moved to fight Holland after he came nowhere close to making weight on Friday.

There were reports on Friday morning that Chimaev was well off weight ahead of the weigh-in, and sure enough when he strode onto the stage and stepped on the scale, he came in a full 7.5 pounds over the 171 pound limit for the welterweight division. This came after UFC president Dana White cancelled the UFC 279 press conference following a brawl backstage that reportedly involved Chimaev, Diaz, Holland, and their respective camps.

What the future holds for Chimaev is unknown after missing weight by such a wide mark. But he’s certainly knocking at the door for title contention with yet another dominant outing.