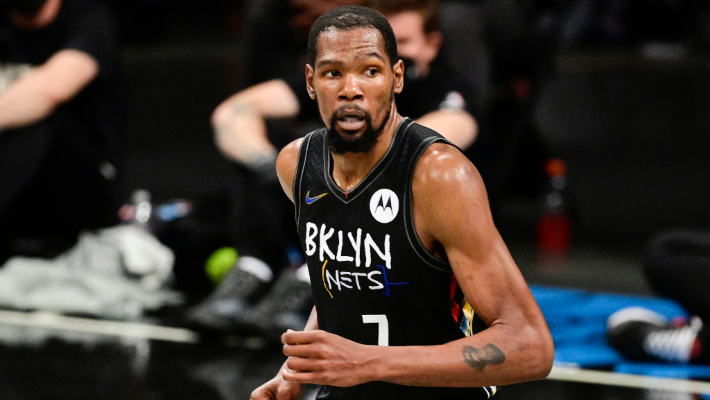 Kevin Durant played all 53 minutes of Game 7 on Saturday night, scoring 48 points to set a new NBA record for the most points in a Game 7 in league history, but that wasn’t enough to topple the Bucks as Milwaukee managed to escape overtime with a 115-111 win.

For the series, Durant averaged 42.7 minutes per game as he logged massive time on the court to do everything he could to get the Nets to the conference finals, scoring 35.4 points per game including 48 and 49 point efforts in Games 5 and 7. After carrying such a load with his star teammates injured, it would have been hard to blame Durant for taking this summer completely off, particularly given that this was his first season back from his Achilles injury.

However, according to Shams Charania of The Athletic, Durant is expected to join Devin Booker, Jayson Tatum, Bradley Beal, Draymond Green, and Damian Lillard as commits to play for Team USA at the Tokyo Olympics this July.

Brooklyn Nets star Kevin Durant is expected to commit to Team USA for the Tokyo Olympics this summer, sources tell me and @anthonyVslater. Durant averaged 34.3 points, 9.3 rebounds and 4.4 assists over 12 games this postseason.

That six is quite the group, and has to make Gregg Popovich and the rest of USA Basketball very happy, given there were legitimate concerns over whether stars would have much of any interest in playing in this year’s Olympics given the condensed season and the physical toll that took on much of the league — including a number of stars who had to exit the playoffs with injuries. Getting commitments from those six is big for USA Basketball and gives them a great core to work with as they start piecing together the rest of the roster, even if it isn’t quite as star heavy as the Olympic roster sometimes is top to bottom.