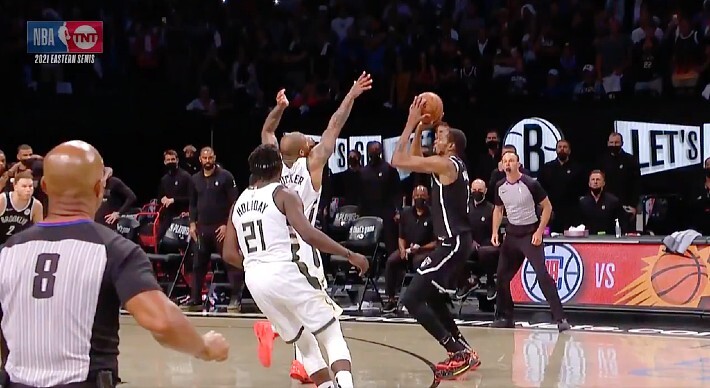 Kevin Durant has hit a whole heck of a lot of incredible shots in his NBA career. In terms of difficulty and the moment in which it came, one of his best came on Saturday night against the Milwaukee Bucks in Game 7 of the Eastern Conference Semifinals, but it came with a major catch: it did not lead to the Brooklyn Nets winning the series.

With one second remaining in regulation, Durant hit an absolutely ridiculous turnaround jumper over PJ Tucker to tie things at 109. It was an impossibly difficult shot, but Durant’s toe was just on the three-point line, so instead of winning the game, the jumper led to the teams playing an overtime period.

The Nets struggled mightily in the extra frame, and the Bucks came out on top, 115-111. After the game, Durant was asked about the jumper, and blamed his size 18 sneakers for being the reason that the Nets’ season is over.

Kevin Durant said that he initially thought his shot at the end of regulation was a three.

“But my big ass foot stepped on the line,” Durant said, in part. “I just saw how close I was to ending their season with that shot.”

Obviously there are dozens of far more pertinent reasons why Brooklyn lost this game than Durant’s shoe size, but the margins were so tight that this really does illustrate how even the tiniest thing was going to come back to bite them. Having said that, Durant scored 48 points, which is a Game 7 record, so this was an all-time performance regardless of his size 18s.